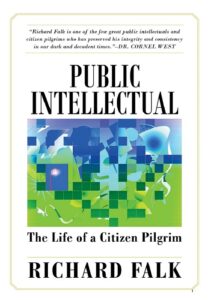 “The pilgrim, as he walks upon the road, must have the open ear, the giving hand, the golden voice, and the open eye which sees the light.  He knows that he does not travel alone.  There is no rush, no hurry, and yet there is no time to lose.  Each pilgrim, knowing this, presses his footsteps forward, and he finds himself surrounded by his fellow men.  Some move ahead – he follows after; some move behind – he sets the pace.  He travels not alone.”

— Tibetan advice for the pilgrim

Richard Falk has written an autobiographic account of the political issues which have marked his life: the U.S. war in Vietnam, apartheid in South Africa, the end of the Shah’s government in Iran, and the conflict between Israelis and Palestinians.  For those who wish to know where Falk stands on political issues today, one can start with Chapter 16 “Intellectually Engaging the World: Fears, Desires, and Hopes.” However, if one is interested in how he got there, it is better to start with the front of the book which details his experiences but also people met, what he did with them at the time and also later.  This review starts in the same style.

Falk became a friend of my Princeton classmate Edward Said. Said and I shared an interest in how literature could tell one something about a culture.  At Princeton, Said was concerned with English literature and I with French and Russian. Later Said turned to the study of how Western writers saw the Middle East and “Orientalism” as well as “Culture and Imperialism” became fundamental approaches to the march of empire through Western literature.  Said became the best known of the public intellectuals of Palestinian background, and for a while was a member of what could be considered a Palestinian parliament until he could no longer take the autocratic ways of Yasser Arafat.

The name of Yasser Arafat brings to my mind an invitation to supper with Yasser Arafat.  I knew Arafat’s brother somewhat who was president of the Palestinian Red Crescent Society and who would come from time to time to Geneva.  Thus, I was invited to a supper that Yasser Arafat was giving in a hotel in Geneva. Although I was not a big fan of Yasser Arafat, I accepted the invitation.  It was a buffet-type supper, and Arafat moved among the guests.  He came to me and we chatted awhile.  Nothing very memorable was said, but I thought if there were something at a later date that I could do on the Palestinian issue, I would be happy to say to Arafat “I am glad to see you again” and not “I am glad to meet you.”

Thus with Falk’s account, we move from issues to people met.  Falk spent most of his academic life teaching international law at Princeton, an hour by train from New York City where he grew up with a lawyer father and was a graduate of the elite secondary school Fieldston whose graduates Folk continued to meet in the halls of power.  New York was home to the Institute for World Order where Falk was active in the World Order Models Project – an effort to analyze the trends in the development of a world society from different cultural viewpoints.  New York was also home to the Council on Foreign Relations in which Falk was active along with a good number of other public intellectuals.

By the mid-1960s when Falk was established at Princeton University, debates on the U.S. war in Vietnam were at a fever pitch.  Falk, who opposed the war, being against all armed foreign interventions as a violation of the U.N. Charter, was considered to be on the “left”.  There were letters to the editor attacking him in the Princeton Alumni Weekly, as well as hot debates among the faculty.  Falk was often attacked by the polemic Marion Levy who had been one of my sociology professors.  However, by the late 1960s, U.S. elite opinion was divided on  the wisdom of the Vietnam war.  There were those who felt that the war was dividing American society – not to mention the harm that was being done to Vietnamese society.  Falk was invited to North Vietnam in a return of U.S. war prisoners to the U.S.  – a visit which marked Falk as a voice of the anti-war left.  As he writes,

“As a known critic of the Vietnam War, I was frequently invited to play a leading role in campus events that involved war and foreign policy, and I rarely refused such interventions.”

Another issue of importance to the thinking of Falk, and also the way he was seen by others, was the end of the regime of the Shah of Iran and the rise of Ayatollah Khomeini.  Falk went to Iran in 1979 at the request of the political figure Mehdi Bazargan to understand the popular anti-Shah movement that was going on, some 10 days before the Shah left Iran.  On his way back, Falk stopped in Paris and was able to interview Ayatollah Khomeini.  From his Iranian observations, Folk was able to understand better the impact that religious ideas have upon people.  As he writes, the Iranian experience gave me

“an appreciation of the potency of Islamic values, and the potential of mobilization from below by and for the masses in the Middle East… I came to understand that these societies were deeply religious, and that secularization and Europeanization that had been so enthusiastically embraced by urban elites, had never been accepted by most of those living in villages scattered throughout these countries.”

The same interplay of politics and religion play an important role in a key aspect of Falk’s reflections.

“ On no issue has the personal and the political been more intertwined in my life experience, especially since the turn of the 21st century, than with respect to the long struggle involving Palestine and Israel.”

Falk had a Jewish mother which is all one needs to be considered Jewish.  Falk became active on the Israel-Palestinian issue as the U.N. Human Rights Council Special Rapporteur on Human Rights in Occupied Palestine (2008-2014).  Falk was chosen for this unpaid and demanding position because of his scholarly work on U.N. issues.  However, he quickly became a target of pro-Israeli, pro-Zionist writers.

“Typically, I was called a ‘Jew hater’, sometimes reinforced by hate language and death threats…I concluded myself that the intensity of these attacks on me, which actually almost immediately lessened after my position at the U.N. ended, suggested that the position of special rapporteur, especially with respect to sensitive issues of this kind, is more important than I had previously realized.   In my case the position was certainly taken seriously by Israel and its supporters… Being part of the U.N. makes one aware of its scale and scope, as well as its dual ambitions of keeping the governments of member states content and carrying out its mission of making the world a better place from the perspective of peace, justice, development, and ecological sustainability.”

Falk is keenly aware of the challenges which we all face.  As he writes,

“Now the future, if conceived as an extension of the present, paints a bleak picture.  The miseries of climate change, global migration, famine, autocratic governance, militarist geopolitics, and diminishing biodiversity seem unlikely to be alleviated within my life span and will more likely worsen.”

Yet at the end, he holds out the hope for positive collective action to meet these challenges.

“I conclude with the fervent public hope that the several revolutionary pathways traveled by citizen pilgrims will be more often and urgently chosen by my sisters and brothers throughout the world, and so widened in scope, extended in meaning, and deepened in influence.”

Anticopyright: Editorials and articles originated on TMS may be freely reprinted, disseminated, translated and used as background material, provided an acknowledgement and link to the source, TMS: Falk, a Citizen Pilgrim, is included. Thank you.