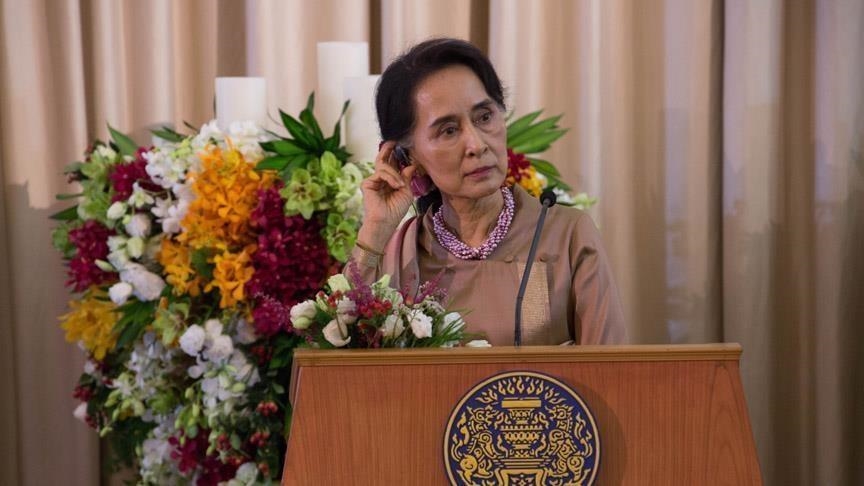 28 May 2021 – This past Monday [24 May], the State Administration Council of Myanmar, the military regime, aired on state TV the still images of the detained National League for Democracy (NLD) leader, Aung San Suu Kyi, as she appeared in a closed-door courtroom, sitting alongside her two NLD deputies, in the dock.

There is absolutely no question about the farcical nature of this trial of the deposed Myanmar state counselor by the regime that has committed — and continues to commit — all the gravest crimes in international law, as the UN International Independent Fact-Finding Mission (2016-18) had emphatically noted. Among the charges against her are the illegal import and possession of walkie-talkies for her security details, breaking the COVID-19 regulations, corruption and most ominously, breaking the State Official Secrets Act.

Alas, the irony should not be lost that the State Official Secrets Act was the charge, Suu Kyi herself, used to defend the arrest and prosecution of Wa Lon and Kyaw Soe Oo, the two Burmese and Rakhine journalists with Reuters, who attempted to report on the summary execution of 10 Rohingya villagers in the midst of the genocidal purge of over 740,000 Rohingya. Suu Kyi told the world that her government was taking legal action against the duo, not because they were journalists doing their job, but because they revealed what was considered state secrets. The two went on to win the Pulitzer Prize for their investigative reporting and were released by Suu Kyi’s government under worldwide pressure.

The images of Suu Kyi sitting in the dock had been imagined by others — but not on trumped-up charges or at a Kangaroo court, but on Myanmar’s international state crimes for which the Burmese leader does bear responsibility.

“I want to be a judge in your trial, Aung San Suu Kyi,” angrily declared Shirin Ebadi, the renowned UK-based human rights defender from Iran.

The occasion was the international conference on Myanmar genocide held at the French National Assembly, the parliament, in Paris. Ebadi’s anger at Suu Kyi’s indifference to the plight of the genocide victims in Bangladesh refugee camps was palpable for those of us in the hall, when she delivered the keynote address before the audience made up of Rohingya refugees, Speaker of the National Parliament of Bangladesh Shirin Sharmin Chaudury, French parliamentarians, and international activists and scholars.

As the main founder of the Nobel Women’s Group, Ebadi knew and met, her “Sister Laureate” at the group’s meeting of which Suu Kyi was a very much welcome member. Ebadi and other laureates, such as Northern Irish peace activist Mairead Maguire and American political activist Jodi Williams actively campaigned for Suu Kyi’s freedom during the 15 years of on-and-off house arrests.

Of course, the Iranian had in mind Suu Kyi’s complicity in the atrocity crimes committed against Rohingya by the latter’s partners in power, the Burmese military generals. In their closed-door meeting with the Burmese sister that took place in New York City in 2013, the American laureate and anti-landmine campaigner, Williams, attempted to raise her concerns about the persecution of the Rohingya, and Suu Kyi’s stance — denial of the gravest crime of genocide and the defense of the perpetrating military.

Suu Kyi shot down the conversation instantly, in a callous tone, “What about them?” according to a friend of mine who was at the meeting and witnessed the exchange.

Several years later, Sir Geoffrey Nice, the prosecutor in the trial of Slobodan Milosevic in the International Criminal Tribunal on the former Yugoslavia, co-authored an op-ed in Foreign Policy, A Genocide in the Making, where he, and co-author, Francis Wade, wrote: “Suu Kyi [as the nation’s popularly mandated leader] should know that inactivity in the face of genocidal actions can carry moral, legal, and even criminal responsibility.”

Yanghee Lee, the former special rapporteur on the human rights situation in Myanmar (2014-2020), who looked to Suu Kyi as an inspirational Asian woman icon, told UK’s Channel Four News, emphatically, that the Myanmar state counsellor should face justice at the International Criminal Court, or any other ad hoc international UN tribunal, for the official role she played in the Myanmar genocide. Lee told me that the Nobel laureate pointedly unveiled a threat of entry visa refusal when they last met, face-to-face, in Suu Kyi’s office in Naypyidaw: “[Y]ou know, if you keep pushing this UN [Human Rights-Up-Front] line, you won’t be able to come here again.”

The Myanmar laureate’s culpability in the state’s international crimes by her countless genocide denials on numerous occasions, both in opposition and in office — and her hostilities toward UN human rights bodies and local human rights defenders and journalists, has been amply noted and roundly condemned worldwide, thanks to the frontpage coverage by the mass media, that turned on the very icon which it helped manufacture, over a few decades.

Against this backdrop, it is deeply troubling that the parallel government, named the National Unity Government (NUG), continues to keep Suu Kyi as its patron-saint, in absentia.

Myanmar’s anti-coup public wildly supports and holds unrealistic expectations of NUG as the sole legitimate body that will seek world recognition, material and financial support from states and non-state actors and communities. Besides Suu Kyi, NUG has lesser mortals whose deeds and words were documented to be a part and parcel of the military-led genocidal process of 2016 and 2017, who now play leading roles, either officially, as Cabinet members, or from behind-the-scenes.

Perhaps most troubling of all, some among the old NLD card-carrying rank and file members, have begun to undertake fanatical and violent acts against anyone who opposes both the murderous coup regime, and the old NLD leaders and anti-Rohingya officials and activists, sitting on the front bench of the NUG. On May 25, one anti-genocide and anti-NLD/NUG Myanmar activist named Bhone Pyi Zone Min became the first casualty of what looks like a hate crime: in his sleep, he was stabbed seven times to death by a fanatical NLD/NUG follower, according to his friends who posted the details of the motive and the kill.

The Myanmar Spring, or New Revolution, led on the streets by Generation Z, or the youth of Myanmar, is ultimately aimed not simply at restoring the tyranny of the racist majority with Suu Kyi as the Mother of the Nation, but to rebuild a new, inclusive society, where Rohingya too, will have their full and equal citizenship.

The deeds and words of the NUG and its supporters, who continue to act as if they are old wine in a new bottle, do not bode well for either the social revolution for an inclusive society, or the violent political revolution, with the objective of totally dismantling the dictatorship, including its instrument of terror — the armed forces.