Banks Increased Deforestation-Linked Investments by $8B during Covid-19: Report 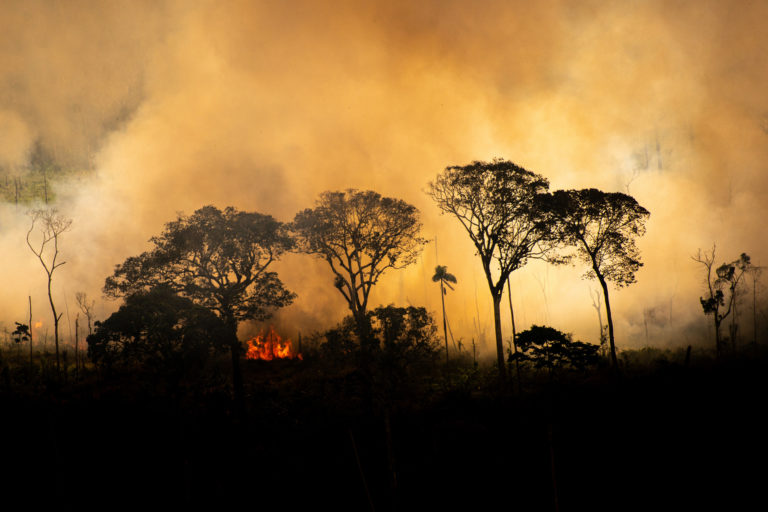 A fire in an area that registered Prodes deforestation warnings between 2017-2019.
Photo: Christian Braga / Greenpeace.

15 Jun 2021 – The world’s 50 largest financial institutions increased their investments in deforestation-linked commodity companies by more than $8 billion since the early months of the Covid-19 pandemic, a new report has found.

The research, published last week by Forests & Finance, a coalition of non-governmental groups, also ranked more than 50 financial institutions based on their environmental, social and governance (ESG) policies, their investments and the financial guarantees they provide to firms operating in forest-risk sectors.

Researchers analyzed financial records of more than 200 companies to track deals in Southeast Asia, Latin America and West and Central Africa, publishing the updated results in a publicly available database.

They found that compared to the previous year, the total value of investments in forest-risk commodity companies rose by more than 21%, or $8.1 billion.

Major banks and investors such as Bank of America, Sumitomo Mitsui Banking Corporation, Industrial and Commercial Bank of China, BlackRock, Vanguard, and State Street all received low scores in the index.

The data on investments covered financial institutions directly involved in the beef, soy, palm oil, pulp and paper, rubber and tropical timber supply chains, including $128 billion of underwriting of deforestation-linked commodity projects between 2016 and 2020 and $28 billion of investment up to April 2021.

Forests & Finance concluded that the policies of the 50 most significant financiers were “collectively very weak,” averaging just 24% in the rankings. Nine financial institutions scored above 50%, with Dutch bank ABN Amro receiving the highest score at 71%.

“This indicates that the majority of financing to the different commodities driving deforestation (beef, palm oil, pulp and paper, rubber, soy, and timber) is not subject to even basic desk-based social, environmental, or governance checks, much less actual verification of client standards,” the group said.

The largest investor assessed by Forests & Finance, Permodalan Nasional Berhad, a Malaysian fund management firm, scored 0 across every sector, meaning that its $5.7 billion of investments in 2021 in forest-risk sectors were not covered by ESG policies. Banco do Brasil, the largest creditor, scored below average at 22%.

The Southeast Asian palm oil sector was the largest recipient of investment, where five Malaysian financial institutions accounted for a fifth of all investment in the region. Brazil’s BNDES was the largest investor in the beef sector, which is closely linked to deforestation, while US firms BlackRock and Vanguard also held significant interests in Latin American pulp and paper and Southeast Asian palm oil.

While the Forests & Finance dataset covers a huge amount of financing of forest-risk industries, researchers have pointed out that the figures are likely to be an underestimate due to the differing disclosure requirements in the various jurisdictions involved, as well as the complex nature of lending for such ventures.

“Protecting the world’s tropical forests has quite literally never been more important to all life on Earth,” Merel van der Mark, coordinator for the Forests & Finance coalition, said in a statement. “And yet, these financial institutions are all but writing a blank check to the companies driving forest destruction and human rights abuses. Instead of giving these companies carte blanche to destroy forests, financial institutions have to be able to identify, assess and manage these risks in their portfolios.”

Last year, Forests & Finance found that some 300 companies operating in forest-risk sectors had received more than $150 billion in financing since the Paris climate agreement was signed in 2016.