The Most Dangerous Censorship

Invisible but Present, and Far from the Eyes of the Public 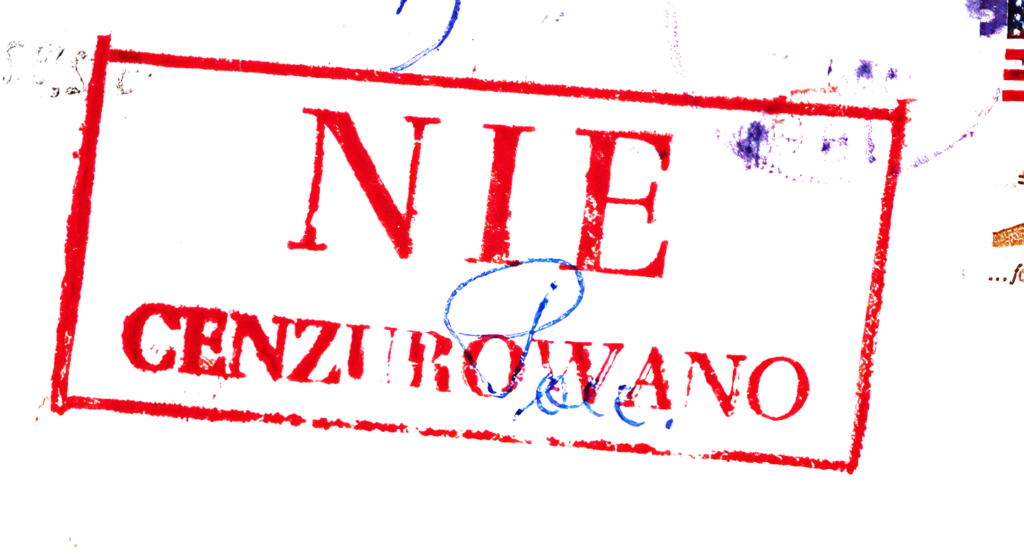 22 Jun 2021 – At the height of the events in Poland, just at the time when the trade union Solidarnosc was being outlawed, I received a letter stamped NIE CENZUROWANO. What exactly did these words mean? They were probably supposed to indicate that the country from which it came was free of censorship. But it could also mean that letters not bearing this stamp were censored, a token of the selective nature of this office, which apparently mistrusts certain citizens while trusting others. It could naturally also mean that all letters bearing this stamp actually did pass through the censor’s hand. At any rate, this symbolic and ambiguous stamp gives a profound insight into the nature of censorship, which on the one hand wants to establish its rightfulness, while at the same time attempting to camouflage its very existence. For, while censorship considers itself a historical necessity and an institution destined to defend public order and the ruling political party, it does not like to admit that it is there. It sees itself as a temporary evil, to be applied during a state of war. Censorship, then, is only a transitory measure which will be scrapped as soon as all those people who write letters, books, etc are politically mature and responsible, thus exonerating the State and its representatives from having to act as guardians of their citizens.

Such is the opening of Censorship/Self censorship, a landmark essay by the Serbian-Yugoslav writer Danilo Kiš, who was born in Subotica, on the Hungarian-Yugoslav border in 1935 and died in Paris in 1989.

Published in English in an anonymous translation in 1986, Kiš’s essay on censorship is something akin to a personal manifesto, and builds on the work of numerous other dissidents of the Cold War milieu who sought to elucidate a certain power-structure in the dreaded Soviet censorship system that prevented their books from being published and their films and TV shows from being made. Dissidents in closed or closing societies naturally come to understand the 16th-century wisdom of Étienne de La Boétie: the State is an abstraction, which depends on citizens — individuals — to execute its will.

Kiš was intrigued by the manner of this execution. His systemization of censorship was tripartite and hierarchal: at the top was the official apparatus — the various bureaus tasked with formulating and enforcing the rules and policies. Below that official level was the publicly legible or popular level, the world of media outlets like newspapers, magazines, and publishing houses, which employ publishers and editors to police their pages. In Kiš’s view, the very reason that publishers and editors can perform the tasks of censorship is because they are “not only censors,” but…publishers and editors. ​​Their official titles give them cover in performing the work the state demands of them, which is not shaping and creating writing, but deforming and destroying it. Finally, at the bottom of Kiš’s hierarchy are what he calls the “last resort”: the printers, who, “as the most responsible elements of the working classes, will simply refuse to print the incriminated text.”

Yet the apparatus of censorship doesn’t end there. There is also what I might call the “first resort,” those censors who exist below everyone, and yet above everyone too: the author who self-censors — a figure who in contemporary Internet terms might be called the “creator,” or “maker.” This figure is me — and this figure is you. It’s someone who takes the burden of censorship unto themselves, without any official censor or cover-censor commanding them. In Kiš’s estimation, this figure threatens to become the ultimate vessel or incarnation of the State, a person who has internalized its oppressions and works them on themselves. According to Kiš, the more censorship happens at this level — at the Marxist level of production, or at the level of your posting on Facebook, Instagram, and Twitter — the more the presence of censorship, indeed the more the very existence of censorship, is hidden from the public.

Think about it: if the suppression is happening in your own home, if you’re suppressing your own speech, who will know? And how can you ever call for help?

The Liar’s Paradox, attributed to Eubulides, is famous in philosophy and logic. Its classic expression is as follows: “This sentence is a lie.” How to evaluate the sentence’s truthfulness? Can it be evaluated? Any attempt to do so leads to paradox.

Kiš, who narrowly escaped the Holocaust and whose work was eventually suppressed in Yugoslavia, wrote passionately on this struggle:

Whichever way you look at it, censorship is the tangible manifestation of a pathological state, the symptom of a chronic illness which develops side by side with it: self-censorship. Invisible but present, far from the eyes of the public, buried deep down in the most secret parts of the spirit, it is far more efficient than [official] censorship. While both of them induce (or are induced?) by the same means — threats, fear, blackmail — this second ill camouflages, or at any rate does not denounce, the existence of any outside constraint. The fight against censorship is open and dangerous, therefore heroic, while the battle against self-censorship is anonymous, lonely and unwitnessed, and it makes its subject feel humiliated and ashamed of collaborating.

Self-censorship means reading your own text with the eyes of another person, a situation where you become your own judge, stricter and more suspicious than anyone else. You the author know what no outside censor could ever discover: your most secret, unspoken thoughts which nonetheless you feel must be obvious to others “between the lines”… Therefore, you attribute to this imaginary censor faculties which you yourself do not possess, and to the text a significance which it actually does not have. For your alter ego pursues your thoughts ad absurdum, until the dizzy end where everything is subversive, where to tread is dangerous and condemnable.

“Lonely and unwitnessed,” “dangerous and condemnable” — Kiš’s perfect and tragic adjectives — describe how many people feel today, when confronted with the internet’s many opportunities for self-presentation, and equally many opportunities for self-destruction. Under the pitiless eye of mass surveillance, which funnels the most tentative keystroke into our permanent records, we begin to surveil ourselves.

Unlike in Kiš’s milieu, or in contemporary North Korea, or Saudi Arabia, the coercive apparatus doesn’t have to be the secret police knocking at the door. For fear of losing a job, or of losing an admission to school, or of losing the right to live in the country of your birth, or merely of social ostracism, many of today’s best minds in so-called free, democratic states have stopped trying to say what they think and feel and have fallen silent. That, or they adopt the party-line of whatever party they would like to be invited to — whatever party their livelihoods depend on.

Such is the trickle-down effect of the institutional exploitation of the internet, of corporate algorithms that thrive on controversy and division: the degradation of the soul as a source of profit — and power. 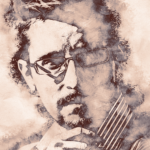