12 Aug 2021 – Six days of Chinese naval maneuvers have begun on 6 August 2021 near southeast Hainan province in the South China Sea at the same time as war ships of the U.S.A, the United Kingdom, Australian Defense Forces ships and those of the Japan Self-Defense Forces are also training in the area. The South China Sea is fast becoming a theater of brinkmanship. 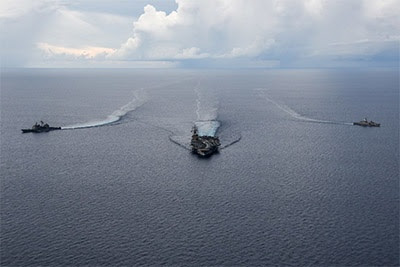 “We view with concern China’s unlawful claim to the entire South China Sea – directly and negatively impacting all the countries in the region from their livelihood, whether it be with fishing or access to natural resources,”

said John Aquilino, commander of the US Indo-Pacific Command at the Aspen Security Forum on 4 August. The U.S. Commander added that he was concerned by China’s suppression in Hong Kong, human rights issues in Xinjiang, as well as China’s military actions on the border with India.

“These are the tings that lead me to believe that our execution of integrated deterrence has to occur now with a sense of urgency.”

The Chinese Foreign Minister Yang Yi quickly replied that “foreign powers” must stop extending “black hands” in the South China Sea and show “four respects – respect for historic truth, international law, the countries of the region and their agreements.

“follow the current international shipping lanes and stay at least 12 nautical miles away from the Chinese islands and reefs…Stopping such intrusive behavior that violates China’s territorial waters is a struggle China is destined to intensify… Under international law, warships, including those of the US and its allies have been able to pass through the South China Sea unimpeded. But if those ships want to exert geopolitical pressure and build a wall to contain China along those shipping lines, those warships will face a confrontation from China. And the intensity of the confrontation is bound to increase constantly.”

It is probable that the Cold War-like rhetoric in Washington has encouraged China’s siege mentality. While it is unlikely that there will be a deliberate use of violence by any party, there can be miscalculations and misinterpretations of actions. In addition to China, Vietnam, the Philippines, Indonesia, Malaysia, Taiwan, and Brunei all make claims to some of the islands in the South China Sea. Slowly but surely, Beijing has been expanding its strategic influence in the South China Sea. The South China Sea islands and surrounding waters are crucial as potential military platforms, plausible points of strategic surveillance as well as sites of energy reserve.

It is in the interest of the world society that the tensions concerning the delimitation in the South China Sea be reduced. The current tensions could slip out of control.

Anticopyright: Editorials and articles originated on TMS may be freely reprinted, disseminated, translated and used as background material, provided an acknowledgement and link to the source, TMS: Saber Rattling in the South China Sea, is included. Thank you.