The thing about the Nonkilling Arts I learnt from Glenn D. Paige is that for authentic Nonkilling Arts, the artist must be imbued in every sense of his or her being with the spirit of Nonkilling; only that can create a genuine piece of nonkilling art. The 4 docs by film maker Vishnu Vasu over the past decade reflect that empathetic and compassionate spirit both in understanding of his subject and the cinematic treatment accorded. The viewer can experience that in the steady narrative and in every frame of his film. Without that nonviolent anchor it would not have been  possible to accomplish such meditative realism about our Right to Life. His creative body of work triggers not only empathy but also coaxes us into seeing our tacit complicity as a fellow human in the whole situation.  The films compel us to think about finding ways to bring about the change.

The film making for independent artists remains a challenge in fragile states as pressure, overt or implicit, from authorities and partisan groups continue to mount and hamper completion of a full narrative. However, Vasu’s films continue to dare and inspire others to try such thought-provoking films to raise consciousness for seeking a nonviolent change. Vishnu Vasu was the youth delegate from Sri Lanka at the First Nonkilling Leadership Forum held in Honolulu in 2007. 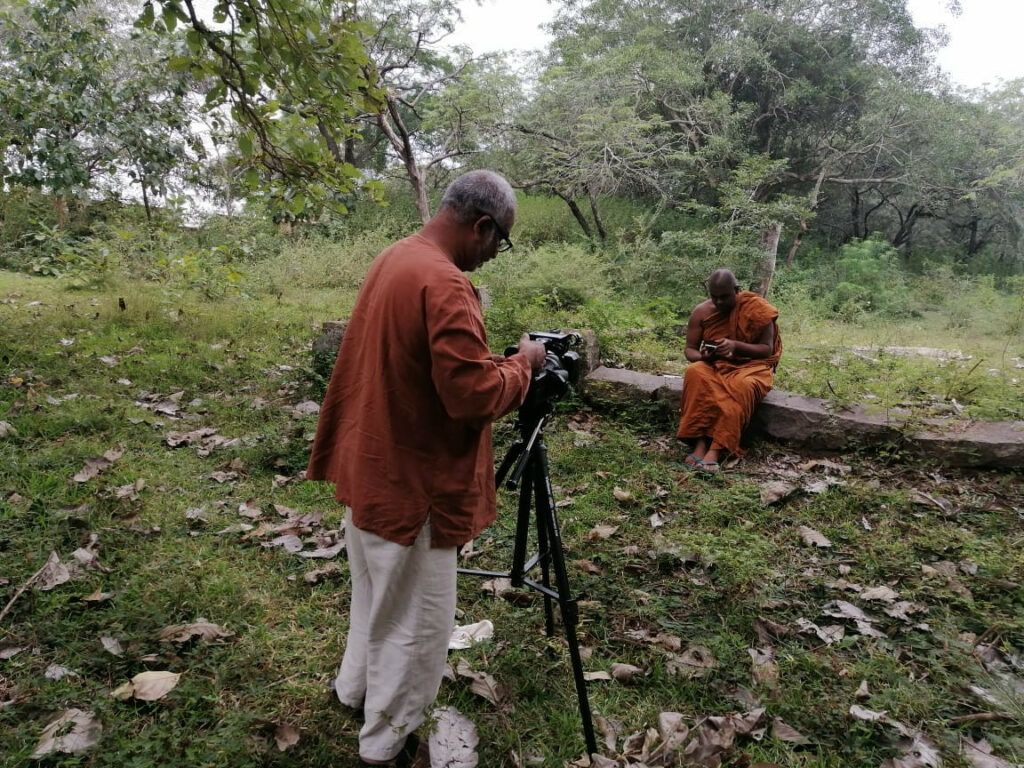 Vishnu Vasu is an internationally acclaimed maverick filmmaker. In addition to the four docs, he has over 25 short films to his credit. His documentary Butterfly was screened at over 200 venues around the world. The United Nations distributed his Butterfly as an advocacy tool to teach non-violent filmmaking and peacebuilding globally. His work with renowned Director Peggy Callahan on child slaves in India and Nepal won a prestigious EMMY award. In addition to a cinematographer, writer, director and editor, Vasu is an accomplished musician often noted in his haunting classical ragas based background musical score in is work.

“I was born to a simple farming family in Kandy, Sri Lanka. Grew up in the village chasing buffalos and playing drums on tree trunks. I dreamed of going to America to study film at the New York Film Academy, to dine with Robin Williams, to go to a sex shop and to ride in a tram to Castro. I tried a zillion times but failed. Frustrated to the very atom of my being, I finally left for India. In India, I studied Broadcast Journalism and South Indian percussion. I traveled around the world to perform and to share stories. Studied at two prestigious music schools Los Angeles Music Academy and Stanford University. Coming home, I joined McCann Erickson as a copywriter. Later I ‘retired hurt’ after fourteen years of contributing to create a greed-based society. And then, I embarked on my documentary filmmaking journey. In 2011 I released my first full-length documentary film titled Gandhi’s Children. And my last is a film on child soldiers of Sri Lanka’s 30-year-old war titled Butterfly. In the last sixteen years I may have worked on over a hundred short films here in Sri Lanka as well as in India, Nepal, Bangladesh, USA and Mexico. This is all about me. Nothing more – nothing less.” 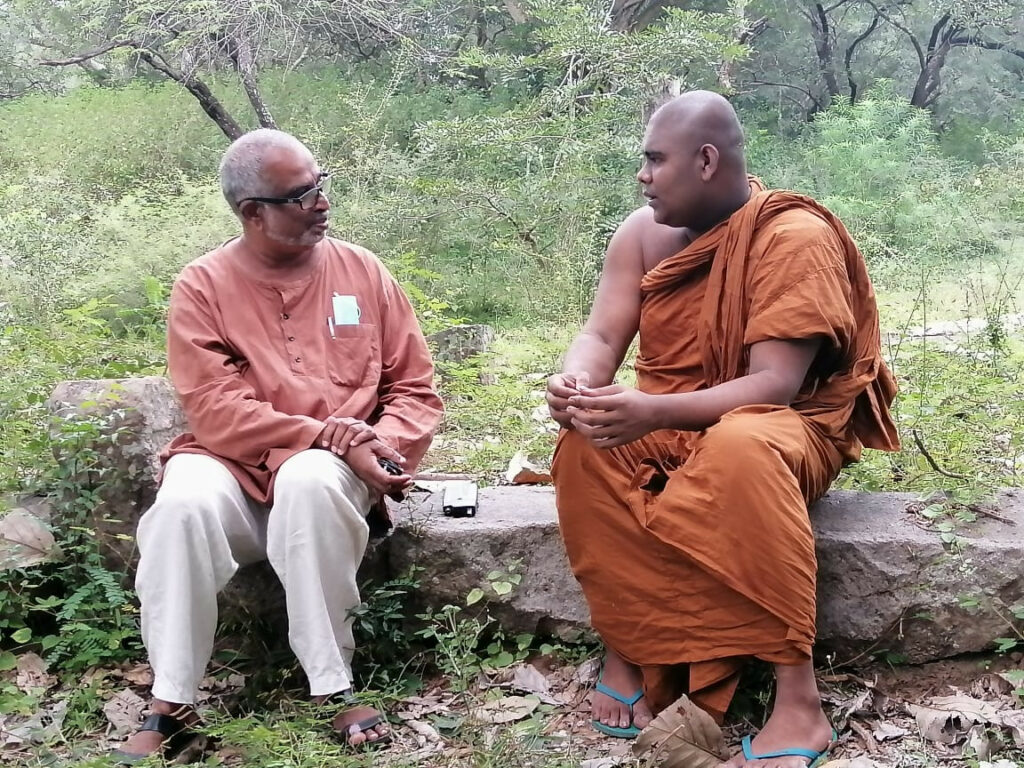 A visually stunning, powerful, and engaging documentary, Vasu’s journey across India captures the stories of marginalized, powerless and oppressed living in dire conditions, while the corporate India is boasting of a superpower economy. Four very powerful stories bring out the discriminative manner in which Harijans and Dalits, the poorest and marginalized untouchables, continue to exist and ignored.  After revealing these appalling stories, the film ends on a note of hope, by featuring a group of 100,000 dalit peasants and tribal members preparing to stage a non violent foot march covering 340 kilometers over a period of one month to the nation’s capital for restoring their land rights. Click:

Vishnu Vasu’s documentary poem, Butterfly, is described as a story of one lost generation, it’s a tribute to those thousands of child soldiers who died in vain in two Srilankan civil conflicts, as well as those who survived despite circumstances. It is also about the filmmaker’s journey in finding closure and breaking the silence around what will be remembered as the darkest years of his country’s history. The film was screened at the National Film Corporation of Sri Lanka in August 2014. Vasu states that Its characters are REAL and their stories are equally real. The question is why have these stories never once been taken up by officials of the UN, the foreign envoys and delegations present at the UNHRC as well as the Human Rights and even media advocates who were well aware of the conscription of children by terrorist groups? When will those in power (state and the terrorists) stop recruiting child soldiers for their wars?

“Handful of Leaves” tells the story of the creation of the largest rural and community development non-governmental organization founded by a former school  teacher Dr. T. Ariyaratne in Sri Lanka. Through interviews with Ariyaratne, his family members, and thought leaders from around the world, we get a glimpse into the life and work of this three-time Nobel Peace Prize nominee and his 60 years of service in spreading messages of community awakening. Ariyaratne knew that to start a rural development revolution, he would have to begin with the soul of the people.  Dr. Ariyaratne travelled to India and met those who inspired and were inspired by Gandhi. He found Gandhi’s philosophy of Sarvodaya needed to be adapted to Srilankan traditions, both belief systems and way of doing things. His Sarvodaya Shramadana Movement, rooted in Buddhism and other ancient Sri Lankan traditions teaches happiness through service to those in need – “sharing of labor, thought and energy for the awakening of all.” There is only one way to Moksha: we must work diligently to diminish sorrow, and increase happiness. 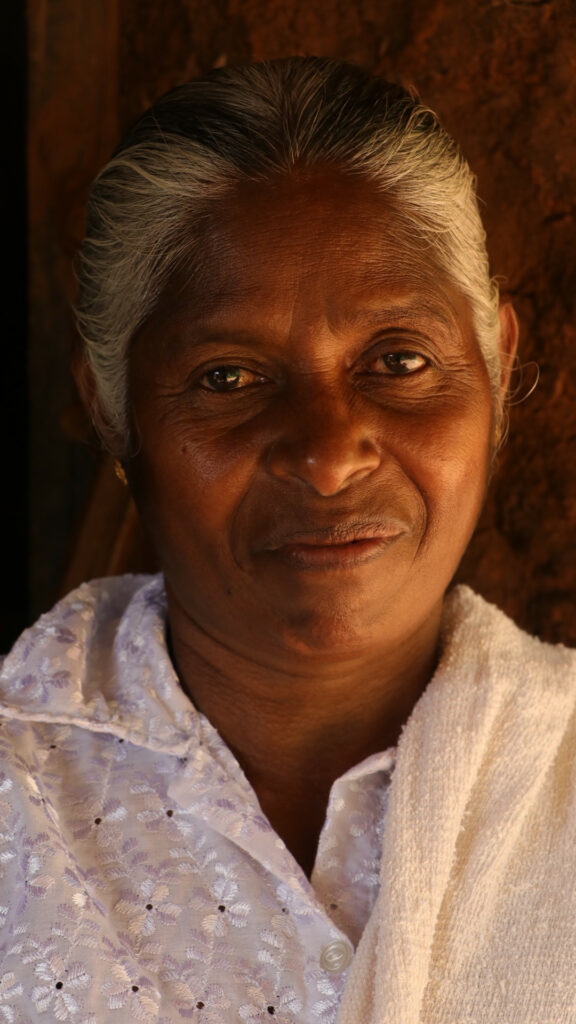 His new documentary is a short doc in Sinhala language with English subtitles, It’s a film about forgiveness, what’s generally termed in peacebuilding Restorative Justice. An important film for all peace workers across the globe.  Beautifully shot and edited with a thoughtful humanist narrative about a widowed Mother and her understanding of value of life, it is a film about  reconciliation pointing that grief can transcend hate and revenge. The Mother remarks that is the only way one can survive finding compassion within oneself. More on  Mother/Amma

Vasu’s short videos are direct but empathetic comment on contemporary issues, e.g. his most recent 2 min. short ‘Hope for Humanity’ about the pandemic.

“Vishnu often shoots with a hand-held camera. His budgets are enviable, and his energy seems tireless. Though not exactly Trotskyite, he is “internationalist” in his thinking and in his outlook on life, and as such his claim that he is “NOT Sri Lankan” makes a lot of sense, and gives light to his deeper search for “truth”; both, in and out of the former war zones. Part of this truth-finding mission is to view and identify grief and loss at the most personal of levels: the one dimension that is deselected and rarely tabulated by statistics and tables. Vishnu’s personal quest on behalf of the person – the individual – in the name of humanity in its absolute form.”  Full Article

On crowd source funding of his filmmaking, he writes:

“This Mother was done with no outside funding. The village is almost 300 kilometers from my home. I travelled in train and public transport to reach the village with a small Sony camera in my backpack and two T-Shirts. Coming home edited the film myself as no studio agreed to give so many studio hours for free.

“So in short it’s a one man’s dream and labour. Many suggested that I submit the film to festivals. Sadly festival organizers charge a fee. With our economy on a downfall we pay 200 rupees per dollar it’s impossible to even think of submitting the film to festivals. That’s all right. All I want is to share my work with the world. Have spoken to a few community leaders with a request to organize screenings. What ever donations collected can be used to portray a similar story from the other Tamil and Muslim communities. That was my original idea but with our poverty dreams never come true.”

Most Vishnu Vasu films are available on Internet/YouTube/Vimeo for free download.  For further information, Vasu can be reached at villagemonk@gmail.com

Dr. Bill (Balwant) Bhaneja is a former Canadian science diplomat, a member of the TRANSCEND Network for Peace Development Environment, and author of six books and scholarly papers on politics and science. He holds a PhD in science policy from UK’s Victoria University of Manchester, currently serves as Senior Advisor to the Center for Global Nonkilling in Honolulu-Hawai’i of which he is a founding member, and produces the Nonkilling Arts Research Committee (NKARC)  Newsletter. A peace activist, his recent books include: Quest for Gandhi: A Nonkilling Journey (2010) and Troubled Pilgrimage: Passage to Pakistan (2013). He lives in Ottawa, Canada. Email: billbhaneja@rogers.com

Anticopyright: Editorials and articles originated on TMS may be freely reprinted, disseminated, translated and used as background material, provided an acknowledgement and link to the source, TMS: Nonkilling Documentaries of Sri Lankan Filmmaker Vishnu Vasu, is included. Thank you.