A Call to Practice an Ethic of Care by Sharing Surplus

Given the institutions that today´s dominant economic science and today´s prevailing common sense assume, sustainable good jobs for everybody, paid for by the wage funds created by the sale of products the employees contribute to making, will never happen.  There will never come a day when there are enough employers finding it profitable to hire workers and pay them well to create sustainable good jobs for everyone who needs one.

Consequently, in tomorrow´s functional world now being built from materials available in today´s dysfunctional   world –speaking in terms of the flows of income identified by Adam Smith– satisfying basic needs and freeing people to pursue Maslow´s higher needs can only be completed (it can be taken part way by salaries paid from wage funds) by relying on transfers of surplus, typically from the non-wage flows of income Smith called profits and rents.  Property income.

Surplus income, as distinct from most labour income, is still today typically profits and rents.  Such income is a typical location where surplus, defined as discretionary income eligible to be transferred from where it is not needed to where it is needed, is often found.  Whether or not some part of profit or rent is surplus, and how to use it, are matters for ethical deliberation.  The deliberation has just begun, and is far from ending, when a given sum is classified as profit or rent.  But since mere mortals cannot stand so much uncertainty and hard thinking, human cultures cut it short by practicing simple authoritative customs –determining for example which kin get which piece of meat when a hunter kills a deer.  Modern societies (Weber´s Gesellschaften), organized principally by contracts and property rights, are customary too, but customary in a different way.  They are basically organized by the property and contract rights (the institutional frame) that made possible Smith´s neat three-part division of income flows into wages, profits, and rents.

One can add to profits and rents twenty first century sources of surplus that Smith in the eighteenth century did not think of.  One is the astronomical surpluses paid to powerful executives in a position to inflate their own compensation packages.   Another source is the small surpluses of middle- class people who retire on good pensions.  There are many more, even though, as anyone who has reviewed her or his personal or family budget finds, there are no cut and dried simple rules defining what is and is not surplus available to be shared.

Taking a larger view, leaving the sphere of the science Smith founded altogether, one can consider all the ways a human being depends on other human beings (and on nature) for need-satisfaction, starting with the newborn´s first urge to suckle its mother´s milk.

It follows from Smith´s worldview that some people lose.  They have no profits or rent because they own no income-producing property.  They earn no wages because nobody hires them.  In addition, mini businesses started with mini credits are never sufficient to turn all losers into winners because of lack of customers.  And so on.   The existence of losers that is a consequence of basic social structure has been going on for so long that it has come to be considered natural.

I find it morally intolerable not to aim for the inclusion of everybody in the benefits of social cooperation by means of sustainable good jobs for everybody or in some other way.   It hardens hearts and poisons minds to take it for granted as a fact that there will be losers in the game of life.  It implies not caring.  It legitimates not caring as a moral norm.

That in life some win, and some lose was and is a “fact” unknown to those indigenous peoples whose social structures were and are organized by kinship. It is a “fact” that was unknown in matristic societies before the rise of patriarchy. It was a “fact” that temporarily disappeared in Sweden and in Austria after World War II until globalization demoted social democracy from the status of humanity´s future to the status of a holding action slowing down the dismantling of yesterday´s welfare state in order to lower wages and taxes to levels compatible with being competitive in global markets.

That some must lose is a “fact” created by the constitutive rules of market society, summarized by Darcia Narvaez as “competitive detachment” and by André Orléan as séparation marchande.

Too many economists treat high growth, low inflation, and low unemployment as three measures of economic success, not always compatible with each other, so that it is necessary to accept less of one to get more of another.  Too many economists settle for policies that deliberately create some unemployment because full employment would be inflationary, and because it would discourage growth by raising wages hence weakening the inducement to invest.

It might also be said that all economists teach that it is a fact that there are and must be losers in life, because any scholar who does not accept what Joseph Schumpeter called the institutional frame of economics –within which it can never be the case that there are enough employers who find it profitable to offer everybody who needs it steady employment at good wages-– is by definition not an economist.

This way of seeing the matter would place dissidents who study economics as critics more than as believers outside the camp of the economists.  As long as we talk this way, they would not be true economists at all, because true economists believe and endorse the concepts that define their discipline.  But we do not need to talk this way all the time.  “Economist” would be far from being the only word that it is convenient to use in different senses in different contexts.

Sharing surplus, defined as moving resources from where they are not needed to where they are needed, is not a new idea.  For Saint Thomas Aquinas writing in the thirteenth century –and echoed today by the teachings of Catholic and mainline Protestant churches—whatever you or I may own does not belong only to ourselves.  It also belongs to whomever we are able to help with our surplus.  Nor is it a forgotten idea.  As we speak millions of people around the world are sharing –sharing money, time, expertise, food, clothing, and whatever they have and can spare—to help others.  Governments and other large organizations also devote themselves to meeting needs because they are needs.  Today, in 2021, I want to suggest that calling for renewed emphasis on this old and well-remembered idea has new meanings in the light of at least five contemporary game-changers:

Where do we go from here? 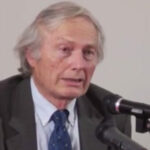 Prof. Howard Richards is a member of the TRANSCEND Network for Peace Development Environment. He is a philosopher of social science and Research Professor of Philosophy at Earlham College, Richmond, Indiana, USA. He was educated at Redlands High School in California, Yale, Stanford, University of California at Santa Barbara, University of Toronto, Harvard and Oxford. He currently teaches in the University of Cape Town`s EMBA programme. His books include: The Evaluation of Cultural Action; Letters from Quebec; Understanding the Global Economy; The Dilemmas of Social Democracies; Gandhi and the Future of Economics; Rethinking Thinking; Unbounded Organizing in Community; and The Nurturing of Time Future. His new book, written with the assistance of Gavin Andersson, Economic Theory and Community Development: Why Putting Community First Is Essential for Survival, is scheduled to be published in July of 2021. howardri@earlham.edu

Anticopyright: Editorials and articles originated on TMS may be freely reprinted, disseminated, translated and used as background material, provided an acknowledgement and link to the source, TMS: A Call to Practice an Ethic of Care by Sharing Surplus, is included. Thank you.