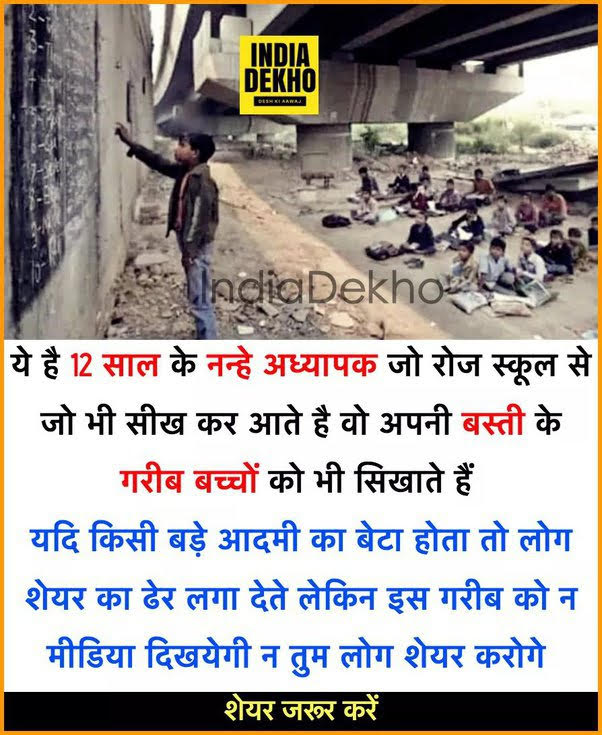 This is a photograph of a twelve year old student who is teaching the poor children of his locality in Delhi. What he teaches is what he learns in his own regular school — arithmetic, Hindi language and some history of India. If you look carefully, the children are sitting below a flyover on a busy road. A neighbouring wall is being used as a blackboard by this intrepid young teacher. The words INDIA DEKHO means See India.

This photo is reminiscent of a Hindi film Shree 420 made in 1955 by the well known actor – Director Raj Kapoor. In the film, Nargis the leading actress was shown teaching street children without charging any fees near her home in Bombay (Mumbai) a big commercial town on the western coast of India. The children sat on the ground as the photo also demonstrates.

One should mention that there are many good public and private schools all over the country but poor children need additional help that this young tutor is providing.

I would also like to talk about the school where Mohandas (Mahatma) Gandhi studied when he was a child. He was born in Porbander  (in the state of Gujarat) on 2 October 1869, but his schooling was in a neighbouring town of   Rajkot for a few years.

His father was a rich person and so Gandhi studied in a good school that was located in a big building and had desks for the students to sit on. The teacher taught from a table on a raised dais. Gandhi had to study Arithmetic, Gujarati language, History and Geography.

There were no girls studying in that school. In fact there were very few schools where girls could study. Several years later (1909) when he wrote a small book called Hind Swaraj he wrote ‘To teach boys reading writing and arithmetic is called primary education’.

Indirectly he pointed out that girls were not getting formal schooling. He also suggested that school education should also include various skills required in society. Gandhi also promoted the learning of southern Indian languages by people of north and vice versa and learning of Hindi language by all. He felt that if we only learn English in addition to our regional languages we will remain mentally enslaved. India has had a rich repertoire of culture — Sanskrit and Bhagwad Gita that have been the country’s guiding spirit since centuries past.

Mahatma Gandhi was assassinated by a Hindu bigot on 30 January 1948, but the spirit of Gandhi boldly remains today in India.

Anticopyright: Editorials and articles originated on TMS may be freely reprinted, disseminated, translated and used as background material, provided an acknowledgement and link to the source, TMS: New India, is included. Thank you.