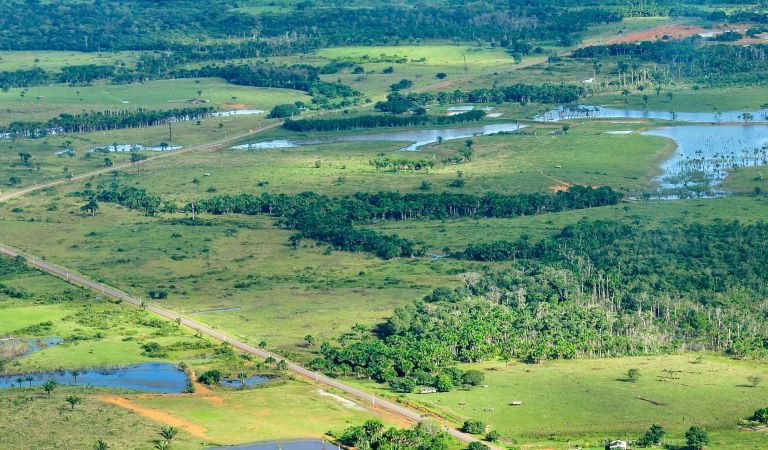 Deforestation in the Brazilian Amazon. Image courtesy of CIFOR/Flickr.

21 Mar 2022 – The Amazon lost millions of hectares of primary forest in 2021, mostly as the result of cattle ranching and other agricultural activities, a new report reveals.

Amazon Conservation’s Monitoring of the Andean Amazon Project (MAAP) found that around 1.9 million hectares (4.8 million acres) of the rainforest were lost last year, similar to annual forest loss rates in 2020 and 2019.

Most of the deforestation took place in Brazil, with Bolivia suffering the second-highest losses. Colombia and Peru also saw noticeable forest loss.

The results are based on University of Maryland satellite data that detect deforestation hotspots. The report compiled raw forest loss data to produce the 2021 hotspot map. Final annual data will come out later this year as additional analysis is done on more thorough satellite readings.

MAAP’s findings suggest that most deforestation in Brazil is happening along major roads through the eastern and southeastern states of Acre, Amazonas, Pará and Rondônia. These states are major hotspots for legal and illegal cattle ranching activity, as well as other agricultural production that relies on roads — most notably highways 163, 230, 319 and 364 — for moving goods in and out of the forest.

The report indicates that deforestation in Brazil isn’t happening in one massive wave but is instead chipping away along major roads in several parts of the country.

“We know from historical precedence that whenever you open up roads in these ecologically sensitive biomes, you’re literally opening routes for all kinds of illegal activities, including illegal deforestation but also land invasions of Indigenous land,” Adriana Abdenur, of Plataforma CIPÓ, a climate, governance and peace-building think tank in Latin America, told Mongabay.

She added, “Whenever you see a road opening up previously pristine or even secondary forest, that’s generally a good predictor that a whole range of illegal activities are likely to take place in that area.”

The maps for other parts of the Amazon biome, meanwhile, reveal other major drivers. In the Peruvian Amazon, for example, most primary forest loss didn’t occur along major roads but instead in a concentrated area where Mennonite settlements have been expanding.

Clearing by Mennonites is the new leading cause of deforestation in Peru, Mongabay reported last year. Since 2017, newly arriving colonies have cleared thousands of hectares of primary forest to set up farms and homes.

In the Bolivian Amazon, satellite readings show a more scattered pattern of deforestation throughout the southeastern Chiquitano dry forest. Unlike the moister parts of the biome in Brazil, the area is dry enough that farmers and ranchers lose control of fires more often, which then spread to primary forest.

“You get a lot of ‘escaped’ fires,” said Matt Finer, the MAAP director and senior research specialist at Amazon Conservation. “You can really see the concentration of fire impacts in the dry forest of the southeast Bolivian Amazon.”

Another arc of deforestation, this one in the Colombian Amazon, has raised alarms among conservationists because much of it penetrates protected areas like Chiribiquete National Park, where more than 6,000 hectares (14,800 acres) of forest have been lost since 2018, MAAP estimates.

Cattle ranching and small-scale subsistence agriculture — often the result of land grabbing in and around protected areas — are the main drivers of deforestation in Colombia, Finer said. 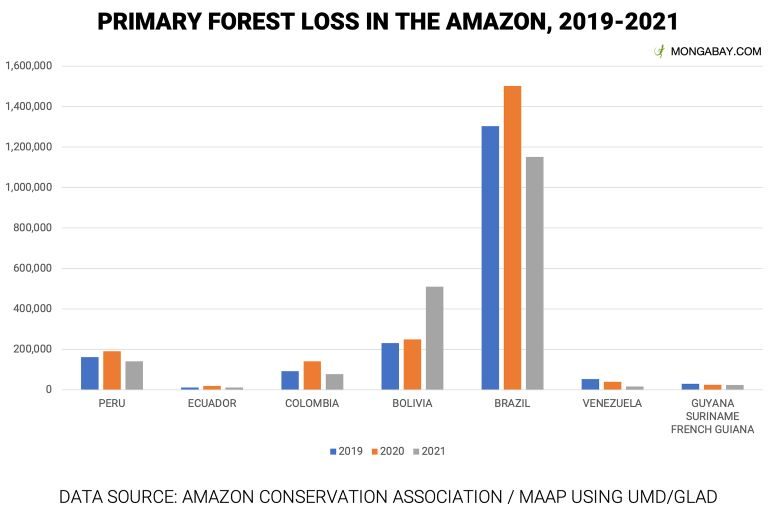 While MAAP’s report suggests deforestation rates didn’t improve last year and fire patterns suggest that future threats aren’t going away anytime soon, there are a few reasons to be hopeful about Amazon conservation in 2022 and beyond.

For example, the readings in Peru show significantly less deforestation in the Madre de Dios region than in years past. Historically, this region has struggled with illegal gold mining, logging and coca cultivation, among other deforestation drivers.

But in 2019, the Peruvian government launched Operation Mercury to eliminate illegal gold mining activities that were contributing to primary forest loss. In the most critical mining areas, deforestation decreased by around 90%, according to MAAP. In the broader region, it decreased by 78%.

Another positive takeaway is that most deforestation in the Amazon appears to be happening in the south, southeast and northwest parts of the biome, leaving a large, contiguous piece of forest in the central and northeast Amazon, which is holding the biome together, Finer said.

“This map really shows, on the positive, all the green that still represents the core Amazon that 50 years from now, will determine the state of the Amazon,” he said, “[depending on] how well we preserve that core.” 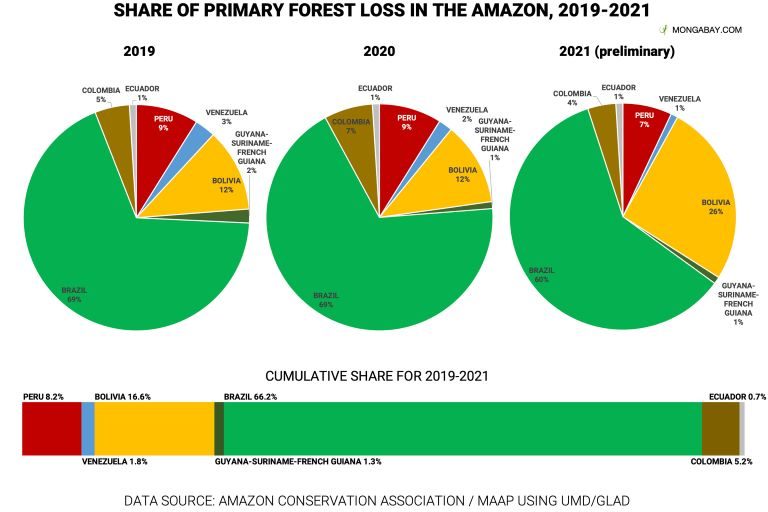 In addition to northeastern Brazil, much of that area falls within Venezuela, Guyana, Suriname and French Guiana. The MAAP team found Amazon deforestation in these countries was relatively low compared to other parts of the biome.

But Finer cautioned that even though deforestation in the northern Amazon may not be happening on the same scale, protecting the region from cattle ranching, agriculture and development is still critical.

“If we start building any of these cross-cutting roads — a road connecting Brazil with Peru — if that stuff starts to happen, if we start to lose the core Amazon, we’re in trouble,” he said.