Militarism Is Never the Answer

3 Mar 2022 – Although we all condemn President Putin`s action in entering Ukraine we must now consider what steps can be taken to de-escalate the situation. Although some low level talks have been held we must consider the best options to not stroke or escalate a war in Europe.  Both sides need assurances of their own safety with Russia requesting that Ukraine remaining non-NATO/neutral state.  This is very important to the Russians.  Before the break-up of USSR, NATO promised never to move east into ex-soviet countries.  They now have missiles and bases in most ex-soviet countries.

The Ukrainians also need guarantees of their own security. There would have to be a full withdrawal of Russian troops and possibly a UN Monitoring body along borders of Donbas region, to prevent ongoing war that has been carried out along the borders of Donbas where thousands of civilians have been killed following the 2014 uprising.  It is my belief that the escalation will continue if we go on weaponizing the region by UK/USA/EU.

We are running the risk of creating an all-out battlefield, which could end up dragging neighbouring countries into the conflict.    The West has always demonized Russia and ignored its concern over its border security.  The US has successfully stoked another War.  The NATO war machine always needs an enemy – Iraq, Afghanistan, Libya, Syria, – and NATO have now turned their sights back to Russia.   It will be the Europeans who reap the fall out of another US/NATO folly.  Refugees will not flee to America.  The economic fallout will also hit Europe hardest.

With sanctions put on by EU / UK etc, millions of people, particularly children in Russia and the Ukraine will be affected (over half million Children under 5 died painfully in Iraq by sanctions put on Iraq by West).  Unfortunately as in all wars the poor will pay the highest price.  The wealthy and elites will orchestrate the deals to be had, and the opportunity that coincide with every war. NATO/US is not an honest broker.

We must look for strong Leadership in Europe to de-escalate the situation.  The consequences in Europe and many other countries and continents will be devastating, as we are now looking at an arms race with Russia.  Instead of Demilitarizing Europe we are militarizing Europe at the behest of a US led NATO.  We must all use our common sense to stand up against militarism and war, because it is always the poor who pay the price. 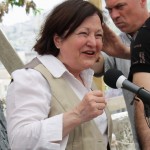 Peace People began in 1976 as a protest movement against the ongoing violence in Northern Ireland. Its three founders were Mairead Maguire, Betty Williams and Ciaran McKeown. Over 100,000 people were involved in the initial movement and two of the founders, Mairead and Betty, received the Nobel Peace Prize for that year. Since its inception, the organization has been committed to building a just, peaceful society through nonviolent means – a society based on respect for each individual, and that has at its core the highest standards of human and civil rights. www.peacepeople.com

Anticopyright: Editorials and articles originated on TMS may be freely reprinted, disseminated, translated and used as background material, provided an acknowledgement and link to the source, TMS: Militarism Is Never the Answer, is included. Thank you.