See the World Going By

Are you living in some Indian town or city near a place where you can see the world go by? What is this world? It is people, first. Then we have vehicles — buses, cars, bikes, bicycles, even an odd tricycle. There are some animals such as dogs and an occasional elephant. Of course, horses are more common sights as they pull overloaded carts. Sometimes carts carrying heavy stuff — boxes, iron bars etc being pulled or pushed by hardened men. Where are they going — not clear, but perhaps to a warehouse or a building that is being constructed.

There are some religious or political processions that occur from time to time. One consequence of such events is the blocking of roads and its arteries. The processions are generally headed by some men who can shout loudly in front of the mikes so as to attract people’s attention. After the procession has passed by, it is not known; in fact it is impertinent to know its result. In other words, have any of the objectives been fulfilled?

In fact, if the outcome of the procession is successful, the business of processioning would suffer. This means that sometimes there is no clear objective of the procession except to make a lot of noise and attract people to join it. So, let one procession pass by, soon another will take its place.

A new method and meaning of a political procession has evolved. Where some election or the other is going on, it is best for a political party to be in the news. This type of political upmanship is called a roadshow.

As the word indicates, a political party has to demonstrate and show its muscle and popularity by having trucks, vehicles and sometimes even a herd of elephants carrying placards  of what it will do for the people if elected.

Some analysts have stated that we are reducing democracy mainly to elections. Yes, in a democratic country like India, the governments at the centre of the country or the state government level have fixed terms — usually five years. So we have regular elections and intense political electioneering takes place at these levels. But does that improve the quality of democracy? For that we should first provide the basic requirements of food, education, shelter for all people, especially the marginalised poor sections.

From the point of view, these requirements are only partly fulfilled resulting in the weakening of democratic values and democracy itself. Despite this weakening, many people continue voting when elections are held — be it at the central or state levels. They feel that it is not in their interest to abstain from voting. They would like to vote for those candidates who have earlier delivered on their promises for the welfare of ordinary people; or those, whose roadshows are attractive and make loud promises.

Another interesting facet of increasing women’s voting in the various elections, is emerging. This is true for Moslem women who are coming out in larger numbers to vote. Whom they vote for, depends on their perception as to which political party will work for their interests over the next five years. Their perception is based on their past experiences with the victors of earlier elections as well as with the intense electioneering and roadshows that occur for the ensuing elections. The candidates may belong to any religion. 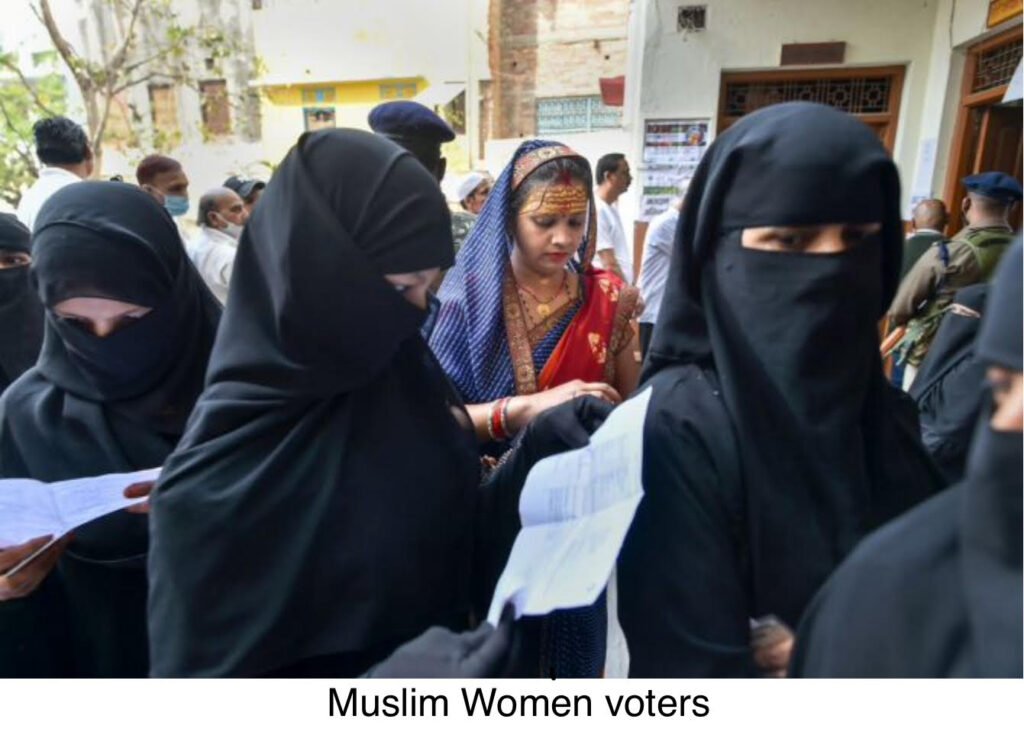 To conclude, the world around us displays all sorts of images of people, of vehicles and of the intense electioneering that goes on before various elections held in India. One can see religious processions also with photographs of the religious gurus or their temples or places of worship. Yes they occasionally block the roads. But not to worry: the sights and sounds are interesting and enduring. Come to India and see the charming sights and listen to various absorbing sounds including conch shells and drum beats.

Anticopyright: Editorials and articles originated on TMS may be freely reprinted, disseminated, translated and used as background material, provided an acknowledgement and link to the source, TMS: See the World Going By, is included. Thank you.

One Response to “See the World Going By”