The Bewildering Vote in Chile That Rejected a New Constitution

9 Sep 2022 – On September 4, 2022, more than 13 million Chileans—out of a voting-eligible population of approximately 15 million—voted on a proposal to introduce a new constitution in the country. As early as March, polls began to suggest that the constitution would not be able to pass. However, polls had hinted for months at a narrowing of the lead for the rejection camp, and so proponents of the new constitution remained hopeful that their campaign would in the end successfully convince the public to set aside the 1980 constitution placed upon the country by the military dictatorship led by General Augusto Pinochet. The date for the election, September 4, commemorated the day that Salvador Allende won the presidency in 1970. On that date, those who wanted a new constitution suggested that the ghost of Pinochet—who overthrew Allende in a violent coup in 1973—would be exorcized. As it happened, Pinochet’s constitution remains in place with more than 61 percent of voters rejecting the new constitution and only 38 percent of voters approving it. 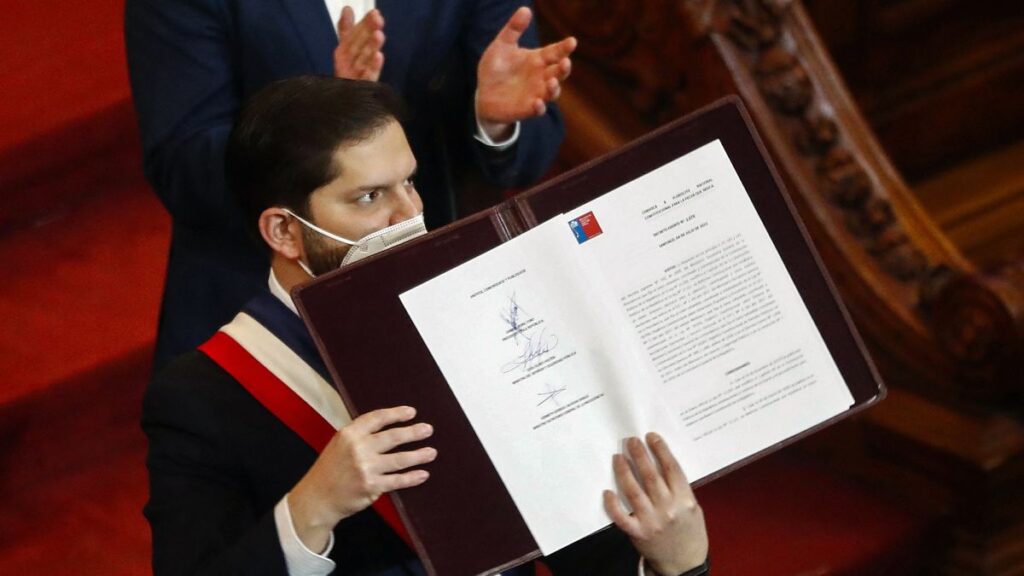 The day before the election, in the municipality of Recoleta (a part of Chile’s capital city of Santiago), Mayor Daniel Jadue led a massive rally in support of passing the new constitution. Tens of thousands of people gathered in this largely working-class area with the hope, as Jadue put it, of leaving behind the “constitution of abuses.” It, however, was not to be. Even in Recoleta, where Jadue is a popular mayor, the constitution was defeated. The new constitution received 23,000 more votes than Jadue had received in the last election—a sign that the number of voters on the left had increased—but the vote to reject the constitution was larger, which meant that new voters made a greater impact on the overall result.

On September 7, Jadue told us that he was feeling “calm,” that it was a significant advance that nearly 5 million Chileans voted for the constitution and that “for the first time we have a constitutional project that is written and can be transformed into a much more concrete political program.” There is “no definitive victory and no definitive defeat,” Jadue told us. People voted not only on the constitution but also on the terrible economic situation (inflation in Chile is more than 14.1 percent) and the government’s management of it. Just as the 2020 plebiscite to draft a new constitution was a punishment for former President Sebastián Piñera, this was a punishment for the Boric government’s inability to address the problems of the people. Jadue’s “calm” stems from his confidence that if the left goes to the people with a program of action and is able to address the people’s needs, then the 5 million who voted for the constitution will find their numbers significantly increased.

Within hours of the final vote being announced, analysts from all sides tried to come to terms with what was a great defeat for the government. Francisca Fernández Droguett, a member of the Movement for Water and Territories, wrote in an article for El Ciudadano that the answer to the defeat lay in the decision by the government to make this election mandatory. “Compulsory voting put us face to face with a sector of society that we were unaware of in terms of its tendencies, not only its political tendencies but also its values.” This is precisely what happened in Recoleta. She pointed out that there was a general sentiment among the political class that those who had historically voted would—because of their general orientation toward the state—have a viewpoint that was closer to forms of progressivism. That has proven not to be the case. The campaign for the constitution did not highlight the economic issues that are important to the people who live at the rough end of social inequality. In fact, the reaction to the loss—blaming the poor (rotear, is the disparaging word) for the loss—was a reflection of the narrow-minded politics that was visible during the campaign for the new constitution.

Droguett’s point about compulsory voting is shared across the political spectrum. Until 2012, voting in Chile was compulsory, but registration for the electoral roll was voluntary; then, in 2012, with the passing of an election law reform, registration was made automatic but voting was voluntary. For such a consequential election, the government decided to make the entire voting process mandatory for all Chileans over 18 years old who were eligible to vote, with the imposition of considerable fines for those who would not vote. As it turned out, 85.81 percent of those on the electoral rolls voted, which is far more than the 55.65 percent of voters who voted in the second record turnout in Chile during the presidential election in 2021.

One of the least remarked upon elements of political life in Chile—as is in other parts of Latin America—is the rapid growth of evangelical (notably Pentecostal) churches. About 20 percent of Chile’s population identifies as evangelical. In 2021, Kast went to the thanksgiving service of an evangelical congregation, the only representative invited to such an event. Forced to vote in the polls by the new mandatory system, a large section of evangelical voters rejected the proposal for a new constitution because of its liberal social agenda. Jadue told us that the evangelical community failed to recognize that the new constitution gave evangelicals “equal treatment with the Roman Catholic Church because it ensured freedom of worship.”

Those who were not in favor of the constitution began to campaign against its liberal agenda right after the constituent assembly was empaneled. While those who were in favor of the new constitution waited for it to be drafted, and they refrained from campaigning in the regions where the evangelical churches held sway and where opposition to the constitution was clear. The constitution was rejected as an expression of the growing discontent among Chileans regarding the general direction of social liberalism that was assumed by many—including the leadership of Frente Amplio—to be the inevitable progression in the country’s politics. The distance between the evangelicals and the center-left is evident not only in Chile—where the results are on display now—but also in Brazil, which faces a consequential presidential election in October.

Meanwhile, two days after the election, school children took to the streets. The text they circulated for their protest bristles with poetry: “in the face of people without memory, students make history with organization and struggle.” This entire cycle of the new constitution and the center-left Boric government began in 2011-2013, when Boric and many of his cabinet members were in college and when they began their political careers. The high school students—who faced the brutal police and now answer to Boric—want to open a new road. They were dismayed by an election that wanted to determine their future, but in which they could not participate due to their age.

Taroa Zúñiga Silva is a writing fellow and the Spanish media coordinator for Globetrotter. She is the co-editor with Giordana García Sojo of Venezuela, Vórtice de la Guerra del Siglo XXI (2020). She is a member of the coordinating committee of Argos: International Observatory on Migration and Human Rights and is a member of the Mecha Cooperativa, a project of the Ejército Comunicacional de Liberación.

Anticopyright: Editorials and articles originated on TMS may be freely reprinted, disseminated, translated and used as background material, provided an acknowledgement and link to the source, TMS: The Bewildering Vote in Chile That Rejected a New Constitution, is included. Thank you.