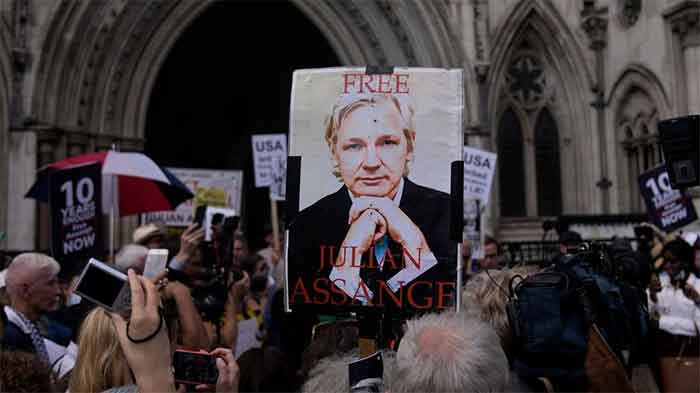 In London, thousands of people formed a giant human chain around Britain’s parliament and called for Assange’s immediate release from the nearby maximum-security Belmarsh prison, where he has suffered for years under conditions that experts have condemned as torture.

Meanwhile, in Washington D.C., people gathered outside the Department of Justice (DOJ) and implored Attorney General Merrick Garland to end the United States government’s attempt to extradite Assange, who faces up to 175 years behind bars on espionage charges stemming from his publication of information that exposed war crimes committed by U.S. forces in Afghanistan, Iraq, and elsewhere.

“We did it!” tweeted Stella Assange, wife of the jailed Australian publisher. “Julian will be so energized and thankful for the support that you have shown for him,” she said in a recording thanking those who surrounded the Palace of Westminster—home to the United Kingdom’s House of Commons and House of Lords—on both sides of the River Thames.

I told Julian today was EPIC.

On behalf of Julian and our family THANK YOU from the bottom of our hearts to each of you.

Among those who joined London’s human chain to oppose the extradition of Assange was Jeremy Corbyn, a member of the U.K.’s opposition Labour Party. Characterizing the protest as an attempt to “stand up for press freedom everywhere,” Corbyn warned: “If they can silence Assange, they can silence anyone.”

“Julian is a journalist,” Corbyn said in an interview. “Journalism is not a crime. If he is extradited to the U.S.A., any other investigative journalist is at risk.”

That message was echoed by WikiLeaks editor-in-chief Kristinn Hrafnsson. Describing Assange as “an intellectual, a journalist who committed no crime but the crime of telling the truth,” Hrafnsson warned: “Today it’s Julian, tomorrow it’s you.”

"An intellectual, a journalist who has committted no crime but the crime of telling the truth; today Julian, tomorrow you" pic.twitter.com/mihPgTuTd7

In a message to Assange, Corbyn said: “Julian, you’ve made your life’s work that of exposing truths. You’ve taken enormous risks and made enormous sacrifices to do that. And you’ve faced horrible personal abuse and attacks upon your life and your character as a result… But there are millions of people that support you all around the world.”

“We’re just some of those, and we’ve completely surrounded parliament to show our support for you,” Corbyn added. “Our demand [for] the British government: Do not deport you; instead, free you so you can return to your passion, your skill, your genius of being a journalist.”

In a last-ditch effort to avoid extradition to the U.S., Assange’s legal team has filed an appeal at the U.K.’s High Court to block the transfer, which was formally approved by U.K. Home Secretary Priti Patel in June. The High Court is expected to announce whether it will hear the appeal in the coming weeks.

Stella Assange told Reuters on Saturday that British government officials should try to convince their counterparts in the U.S. to withdraw the extradition bid launched in 2019 by then-President Donald Trump’s administration and pursued relentlessly by President Joe Biden’s administration.

On the other side of the Atlantic, Ben Cohen, co-founder of Ben & Jerry’s Ice Cream, was among those who demonstrated outside the DOJ. “It’s time to end the war on journalism and free Assange,” the activist tweeted.

Yo ⁦@POTUS⁩, the US is trying to put Assange in jail for life for publishing the truth about war crimes in Iraq and Afghanistan. It’s time to end the war on journalism and #freeassange pic.twitter.com/kXl6wDRXwN

“There’s no democracy without freedom of the press,” Cohen said at the rally. “Because it’s only a press that can hold government accountable. And there’s no free press without a free Assange.”

Given that he is being persecuted for the common journalistic practice of publishing classified information to expose wrongdoing in service of the public good, press freedom and human rights advocates have denounced the indictment of Assange as a landmark attack on and threat to First Amendment protections.

“Julian Assange exposed the crimes of the most powerful governments and corporations in the world today,” Misty Winston, a leading organizer of the D.C. rally, said this week in a statement. “He should be praised, not prosecuted.”

When Secretary of State Antony Blinken said last July that the U.S. “will always support the indispensable work of independent journalists around the world,” critics were quick to point out that Washington’s purported commitment to press freedom has never applied to Assange.

In a message to Biden, Corbyn said Saturday: “You won a presidential election against an extremely intolerant right-wing president. You won that with the support of millions of Americans who want to live in a free, open, democratic society.”

“Are you really wanting your administration to be the one that imprisons a journalist for telling the truth about wars in Afghanistan, Iraq, Iran, Syria, Libya, and the environmental destruction by big business and arms companies in so many parts of the world?” he asked. “Think of your place in history. Are you to go down in history as the president who put a journalist in prison on a triple life sentence? Or, will you get your place in history as the man who stood up for free speech?”

Nathan Fuller, director of the Assange Defense Committee, said this week in a statement that “the Biden DOJ could end this travesty at once.”

“Administration officials have given speech after speech touting the principles of a free press abroad and the importance of journalism to a healthy democracy,” said Fuller. “It’s time they practice what they preach and drop these charges immediately.”

Solidarity events were held Saturday in cities across the U.S., including San Francisco, Denver, Tulsa, Seattle, and Minneapolis.

“Julian would walk free,” he said.