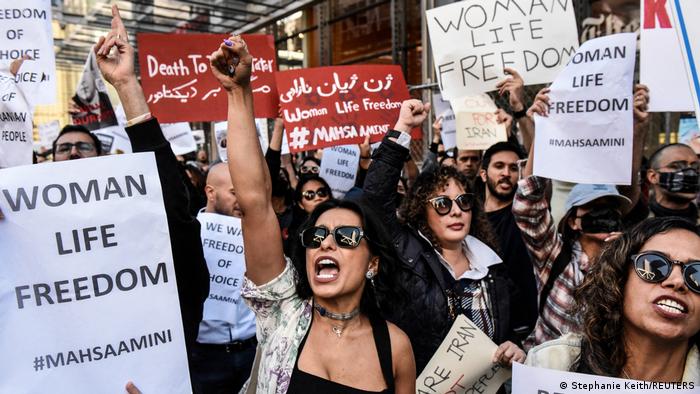 28 Sep 2022 – The cry “Women-Life-Liberty!” is going up in many different parts of the Islamic Republic of Iran.  It is not possible to know in advance how strong the protests will be and what will be the specific reforms demanded. The protests began on 13 Sep 2022 at the announcement of the death of 22-year-old Mahsa Anini in police custody, having been arrested by the “morality police” for not having the proper dress.  She was an ethnic Kurd.  The protests began in the Kurdish areas but soon spread to all ethnic groups and many parts of the country.  However, the government is worried that support for the demonstrations from Kurds, especially some in Iraq, could grow and lead to multi-ethnic tensions.

Women have been a central focus of the social policy of the Islamic government.  Even before coming to power in 1979, Ayatollah Khomenini from his exile in France had said that the overly great liberty of women was a chief obstacle to his policies.  Repressive policies against women with compulsory veiling laws were quickly put into place. However, unlike the Taliban in Afghanistan, women were not barred from higher education.  It is estimated that some 65 percent of university students are women.  Many play important roles within society but must keep a low profile, dress according to the code and be under the control of a man, at least when visible in public.

Now the cry “Women – Life – Liberty” proclaimed by many women and some men indicates the changes in outlook.  Obviously, the government led by the Guide Ali Khamenei and the conservative President Ebrahim Raissi are worried.  The police, the Revolutionary Guards, and other paramilitary forces have been called out.  Some protesters have been killed, others wounded.  The number of arrested is unknown.  Journalists have been prevented from reporting, and internet services have been cut or are irregular.  Thus there are few photos of the demonstrations.

There have been waves of protests in Iran before without bringing about major changes in policy. However, some observers believe that there is a new spirit in these protests.  “Women – Life – Liberty” may be the wave of the future and should be watched closely.

Anticopyright: Editorials and articles originated on TMS may be freely reprinted, disseminated, translated and used as background material, provided an acknowledgement and link to the source, TMS: Iran: Women-Life-Liberty, is included. Thank you.