Leon Trotsky, by name of Lev Davidovich Bronshtein   (born November 7 [October 26, Old Style], 1879, Yanovka, Ukraine, Russian Empire—died August 21, 1940, Coyoacán, Mexico), communist theorist and agitator, a leader in Russia’s October Revolution in 1917, and later commissar of foreign affairs and of war in the Soviet Union (1917–24). In the struggle for power following Vladimir Ilich Lenin’s death, however, Joseph Stalin emerged as victor, while Trotsky was removed from all positions of power and later exiled (1929). He remained the leader of an anti-Stalinist opposition abroad until his assassination by a Stalinist agent. 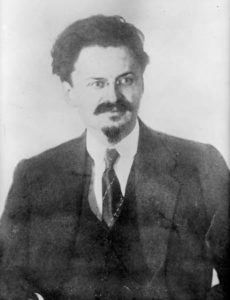 Trotsky’s father, David Bronshtein, was a farmer of Russified Jewish background who had settled as a colonist in the steppe region, and his mother, Anna, was of the educated middle class. He had an older brother and sister; two other siblings died in infancy. At the age of eight, he was sent to school in Odessa, where he spent eight years with the family of his mother’s nephew, a liberal intellectual. When he moved to Nikolayev in 1896 to complete his schooling, he was drawn into an underground socialist circle and introduced to Marxism. After briefly attending the University of Odessa, he returned to Nikolayev to help organize the underground South Russian Workers’ Union.

Anticopyright: Editorials and articles originated on TMS may be freely reprinted, disseminated, translated and used as background material, provided an acknowledgement and link to the source, TMS: Leon Trotsky (7 Nov 1879 – 21 Aug 1940), is included. Thank you.