Wisdom from the Jungle

While we are inundated with reports of varying credibility about the war instigated by US/NATO against Russia being fought in Ukraine, evoking justifiable hand-wringing over needless loss of life, threat of nuclear Armageddon and ever-growing windfall profits to weapons makers, we would do well to pay closer attention to Haiti, ground zero for resistance against Western colonialism and exceptionalism.

Barely a blip on the radar of mass media, we’re occasionally seeing brief reports of unrest in Haiti that belie the true scope and nature of the current uprising.  The population of Haiti has taken to the streets in ever-growing numbers, demanding their basic human rights and democracy, along with an end to corruption and to the plunder of public resources. They demand an end to US/UN occupation, and an end to the right-wing Haitian Tét Kale Party (PHTK) regime headed by Ariel Henry. They are demanding a transitional government of public safety (Sali Piblik) to create a foundation for free and fair elections and a return to democratic rule.  They are demanding an end to the terror inflicted by the Haitian National Police and paramilitaries, including the G-9 death squad led by ex-police officer Jimmy Cherizier, working with the PHTK regime. They are demanding an end to the proliferation of kidnappings, rape, police killings, and massacres throughout the country, such as the horrific Lasalin massacre. 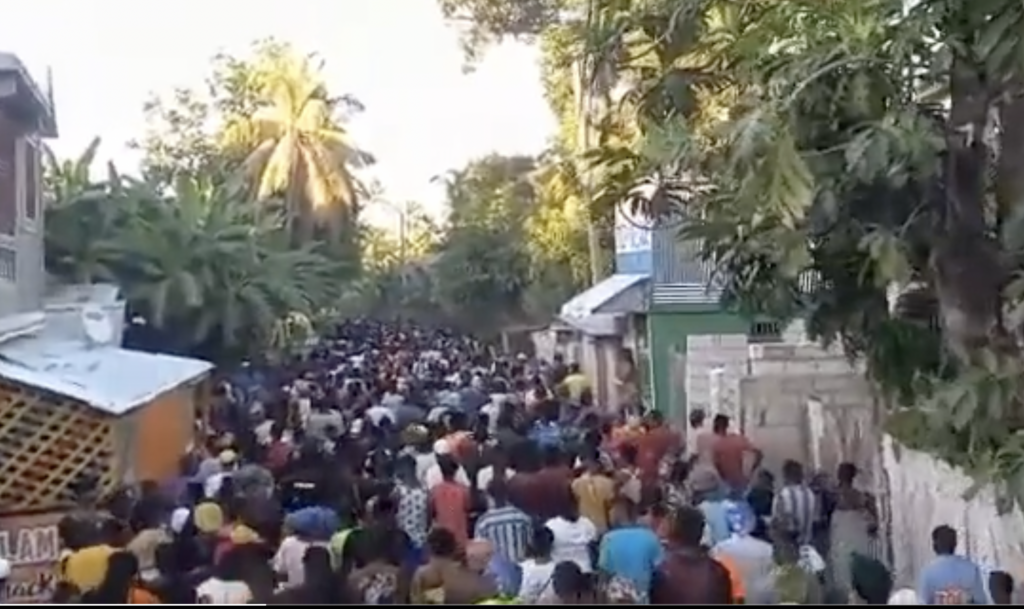 In typical fashion, the US, which has supported Henry and supplied arms to violent gangs, now proposes a cynical response to the chaos it has unleashed:  let the arsonists try to put out the fire by sending in more foreign military to suppress protest and keep Haitians under control, a move emphatically rejected by Haitians.

Referring to the crisis in Ukraine, EU foreign policy chief Josep Borrell showed the West’s true colors recently, expounding arrogantly about Europe’s privileged position as ‘a garden of liberal democracy, good economic prospects and social solidarity’ which is surrounded by ‘the jungle’.  Well, welcome to the club, Russia.  You’re now part of ‘the jungle’, too, a condescending designation—along with other choice vulgar monikers—that Western leaders have slapped on Haiti since its inception.

Haiti is not a poor country.  It’s a robbed country. Haiti’s people and valuable natural resources have been exploited over the last 500 years by the effects of slavery, racism, colonialism, imperialism, anti-communist hysteria, militarism, kleptocracy, corporate globalization and free trade imposed by Western powers.  If you’ve ever marveled at the splendor of Paris with its magnificent palaces, imposing monuments and grand avenues, recall that these were financed through the blood, sweat and tears of enslaved people working the cane fields of Saint Domingue (now Haiti), in an early chapter of the global drug trade, the drug of choice at the time being heretofore scarce sugar.

The enslaved people’s defiance and determination to assert their dignity led to the 1791-1804 Haitian Revolution culminating in the establishment of the first free republic in the Western hemisphere.  Extortion, co-opting and sabotage by Western powers set in immediately, thwarting completion of the revolutionary vision, but Haitians have never stopped keeping their eyes on the prize.

In 1915 as the movement to cast off the yoke of corrupt elites under Western patronage grew, Woodrow Wilson sent in the US Marines to quell masses agitating for their rights.  The US military occupied Haiti for 19 years, taking full control of the national treasury, re-writing the constitution, establishing an army to repress the people, and re-instituting slavery in the form of forced labor to build roads to serve military and commercial interests.  During the “red scare” of the mid-20th century, the US handsomely rewarded the merciless Duvalier dictators for keeping “communism” at bay. 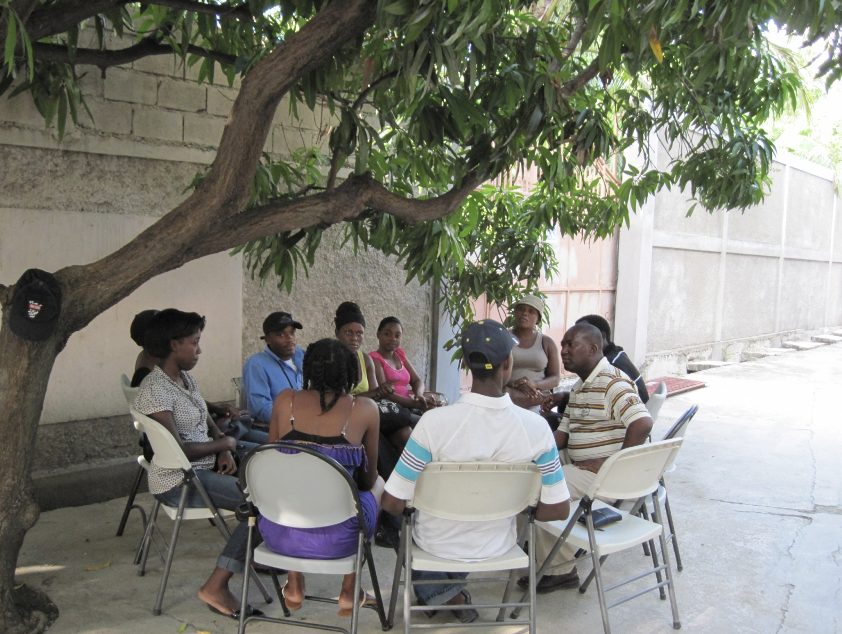 Class at the Aristide Foundation for Democracy in Port-Au-Prince, Haiti, 2011.  (Photo by M. Langlois)

The most recent blossoming of self-determination in Haiti followed the emergence of the Lavalas movement in the late 1980’s. For several years between 1990 and 2004 (interrupted by the CIA-backed violent coup d’état of 1991 and ensuing severe repression), Haitians under Lavalas leadership made remarkable gains in lifting up the poor in the areas of education, health care, increased wages, children’s rights, status of women, infrastructure, justice and human rights, political democracy, freedom of religion, combating drug trafficking and corruption, and international relations.  All this while the US waged relentless economic warfare, seeking to regain control of Haiti’s workforce and natural resources.

Adding insult to injury, no sooner had Haitians turned out in unprecedented numbers to jubilantly celebrate their bicentennial on Jan. 1, 2004—a pivotal event for all freedom loving people that was scandalously ignored by most media in the US—than the US, France and Canada conspired to carry out the February 29, 2004 coup d’état, kidnapping President Aristide and ushering in US marines, later replaced by multi-national UN forces, slamming the brakes on further implementation of the Lavalas vision of inclusion, participation and transparency.  President Aristide often emphasized that the problem is exclusion and the solution is inclusion, where everyone has a seat at the table, moving people from misery to poverty with dignity and beyond.

The US appointed coup regime cast much of the population back into misery and violently repressed the Fanmi Lavalas party, as noted in their recent statement:

“…since the kidnapping/coup d’état of February 29, 2004, the occupation of the country has caused more corruption, more massacres in the popular/working-class neighborhoods, more impunity, more hunger, more misery, more actors in the economic sector who have allied themselves with gangs that are increasing the digging of graves daily. Many billions of dollars were spent for the occupation, and for what? The situation has continued to worsen, as we all can attest. This calamity is the result of the 2004 coup…”

And yet the Haitian people’s resistance to exploitation continues, as seen in the growing mobilizations.    The Lavalas statement goes on to assert:

“The solution for Haiti is in the hands of Haitians… the time has come to find together how we will stop the machine of insecurity that is spreading death everywhere in the country. Yes, it is not too late.  The future of Haiti is in our own hands, Haitian People. Together, let us safeguard our dignity.”

To non-Haitians who ask, what can I do to help?  If you live in the EU, Canada or US (as I do), educate your fellow countrymen and tell your leaders in no uncertain terms:

Stop viewing yourselves as more enlightened, more democratic, more able to solve problems, more deserving of material comforts than the people of Haiti.  Let go of your compulsion to control others in the guise of pretending to “save” them.  End the economic, political and military meddling in Haiti and elsewhere.  Not in my name and not with my tax dollars.  Accept that you can’t always tell others what to do, and get used to respecting other nations and interacting with them collaboratively. 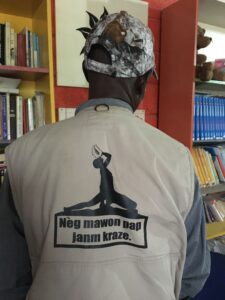 If you live in other parts of the world (aka ‘the jungle’), tell your leaders to reject US pressure to send your soldiers, dressed as gun-toting blue-helmeted ‘peacekeepers’, to Haiti.

Haitians need to be guaranteed the opportunity of full participation in shaping their own future.  Haiti rejects assistance from the gun and does not need the “gift” of loans which create onerous debt.  It does not need to be told what to plant, or for whom to provide sweatshop labor, or to whom its vast natural resources should be siphoned off.  Haitian children deserve to be nurtured and cared for, not orphaned and made destitute, ripe for trafficking.  Haiti must not be forced to fight for crumbs at the world’s banquet table.  Such injustice has lasted too long.

In my several visits to Haiti since the 2004 coup, I have seen Haitians come together to solve problems in the daily struggles of life.  I witnessed their commitment to the true values of democracy.  The Haitian people won their freedom 200 years ago, and they insist on shaping their own future.  Now it is time for the global institutions to step aside and let Haiti enjoy the freedom for which its people have fought, died, and suffered so much.  I was humbled to interact with so many people whose determination is still alive; people who refuse to give up their dream and vision of a Haiti in which everyone’s basic needs are met and the human spirit can thrive.

As is all too clear, Western thievery and arrogance are not directed at Haiti alone.  In the above paragraphs, substitute ethnic Russians in Donbass, Palestinians, Ethiopians, Eritreans, Congolese, Yemenis, Syrians, Cubans, etc., for Haitians, and you’ll connect the dots.  We must stand with the bulk of the human family on the receiving end in setting their greedy relatives straight.

Anticopyright: Editorials and articles originated on TMS may be freely reprinted, disseminated, translated and used as background material, provided an acknowledgement and link to the source, TMS: Wisdom from the Jungle, is included. Thank you.

3 Responses to “Wisdom from the Jungle”