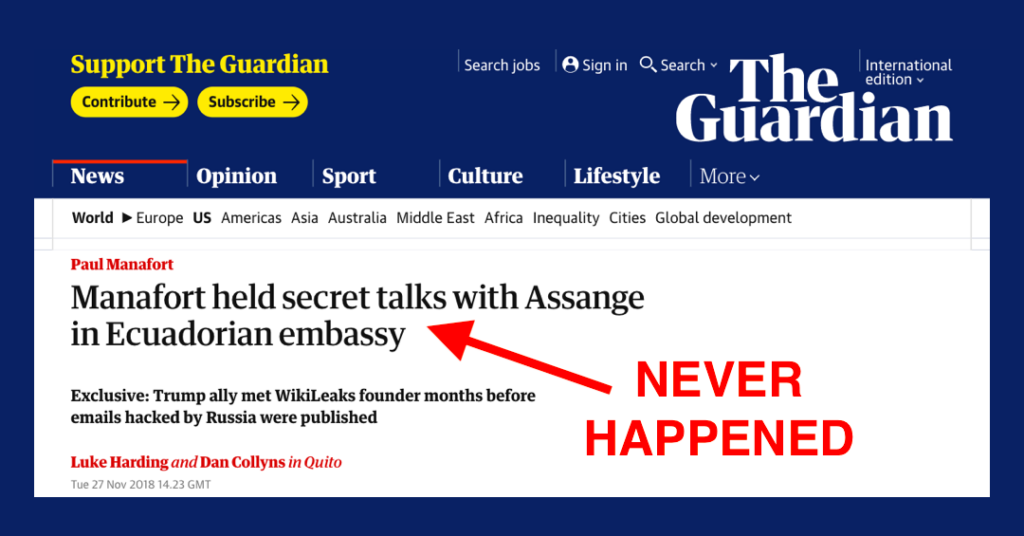 30 Nov 2022 – The Guardian has joined The New York Times, Le Monde, Der Spiegel and El País in signing a letter from the five papers which collaborated with WikiLeaks twelve years ago in the publication of the Chelsea Manning leaks to call for the Biden administration to drop all charges against Julian Assange. This sudden jolt of mainstream support comes as news breaks that Australian Prime Minister Anthony Albanese has been personally pushing the US government to bring the Assange case to a close.

The Guardian’s participation in this letter is particularly noteworthy, given the leading role that publication has played in manufacturing public support for his persecution in the first place. If The Guardian really wants to help end the persecution of the heroic WikiLeaks founder, the best way to do that would be to retract those many smears, spin jobs and outright lies, and to formally apologize for publishing them.

This is after all the same Guardian which published the transparently ridiculous and completely invalidated 2018 report that Trump lackey Paul Manafort had met secretly with Assange at the Ecuadorian embassy, not once but multiple times. Not one shred of evidence has ever been produced to substantiate this claim despite the embassy being one of the most heavily surveilled buildings on the planet at the time, and the Robert Mueller investigation, whose expansive scope would obviously have included such meetings, reported absolutely nothing to corroborate it. It was a bogus story which all accused parties have forcefully denied and no serious person believes is true, yet to this day it still sits on The Guardian’s website without retraction of any kind.

If @guardian truly wants the charges dropped against Julian Assange, a good way to facilitate that would be to retract and apologize for all the many smears and outright lies they've published about him to help manufacture consent for those charges.https://t.co/kUE6vlmbLl

This is the same Guardian which ran an article in 2018 titled “The only barrier to Julian Assange leaving Ecuador’s embassy is pride”, arguing that Assange looked ridiculous for continuing his political asylum in the embassy because “The WikiLeaks founder is unlikely to face prosecution in the US.” The article was authored by the odious James Ball, whose article begins: “According to Debrett’s, the arbiters of etiquette since 1769: ‘Visitors, like fish, stink in three days.’ Given this, it’s difficult to imagine what Ecuador’s London embassy smells like, more than five-and-a-half years after Julian Assange moved himself into the confines of the small flat in Knightsbridge, just across the road from Harrods.”

This is the same Guardian which published an article titled “Definition of paranoia: supporters of Julian Assange”, arguing that Assange defenders are crazy conspiracy theorists for believing the US would try to extradite Assange because “Britain has a notoriously lax extradition treaty with the United States,” because “why would they bother to imprison him when he is making such a good job of discrediting himself?”, and “because there is no extradition request.”

This is the same Guardian which published a ludicrous report about Assange potentially receiving documents as part of a strange Nigel Farage/Donald Trump/Russia conspiracy, a claim based primarily on vague analysis by a single anonymous source described as a “highly placed contact with links to US intelligence”. The same Guardian which has flushed standard journalistic protocol down the toilet by reporting on Assange’s “ties to the Kremlin” (not a thing) without even bothering to use the word “alleged” on more than one occasion. The same Guardian which advanced many more virulent smears as documented in a 2018 article by The Canary titled “Guilty by innuendo: the Guardian campaign against Julian Assange that breaks all the rules.”

There is, needless to say, no hint or suggestion in the Mueller Report that Paul Manafort visited Julian Assange ever in his life, let alone 3 times in the Ecuadorian Embassy during the election. It would obviously be there if it happened. How can the @guardian not retract this?? pic.twitter.com/5ory1w0mfj

Even the wording of the joint letter itself is dishonest when coming from The Guardian.

“This group of editors and publishers, all of whom had worked with Assange, felt the need to publicly criticise his conduct in 2011 when unredacted copies of the cables were released, and some of us are concerned about the allegations in the indictment that he attempted to aid in computer intrusion of a classified database,” the letter reads. “But we come together now to express our grave concerns about the continued prosecution of Julian Assange for obtaining and publishing classified materials.”

As we’ve discussed previously, the narrative that Assange recklessly published unredacted documents in 2011 is itself a dishonest smear, and the unredacted files were actually published elsewhere as the result of a real password being recklessly published in a book by Guardian journalists David Leigh and Luke Harding (the same Luke Harding who co-authored the bogus Manafort-Assange story). Assange took extraordinary measures to try and minimize the damage that was done by those Guardian reporters, but wound up getting thrown under the bus and blamed for their actions anyway.

If The Guardian is sincere in its stated desire to see the end of the persecution of Julian Assange, the single most effective thing it could do to help advance that goal would be to publicly acknowledge that it helped to deceive the world about him, and work to correct the record.

Guardian ran a campaign to demonise J.Assange in 2018, well-documented here. This is not just normal false reporting we expect from ultra-establishment media -it helped prepare the ground for Assange’s prosecution. Guardian needs further investigation. https://t.co/2lFTzO9cKG

The only reason Assange’s case doesn’t have more support currently is because so much of the public has been deceived into believing that what’s happening is not the unconscionable persecution of a journalist for telling the truth, but rather the righteous prosecution of a sinister Russian agent who has broken laws and endangered lives. The Guardian easily played a larger role in manufacturing that collective misconception than any other single news outlet in the world, and as such it could do tremendous good by retracting and apologizing for its publications which fed into it.

This is the sort of thing a publication would do if it was really interested in truth, justice, and journalistic ethics. Is it what the people who run The Guardian will choose to do? I highly doubt it.