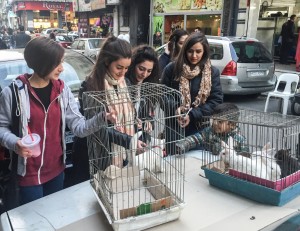 People try to live their lives and enjoy the small things in Damascus.
© Jan Oberg 2016

18 Dec 2016 – In spring 2011 I was invited by then Danish foreign minister, Villy Søvndal, to be a keynote speaker at a conference in Copenhagen arranged by the ministry and the Danish Institute for International Studies (DIIS) with experts, then UN mediator Kofi Annan’s adviser, scholars, diplomats and, most importantly, a number of Syrian (opposition) politicians and civil society representatives.

The minister left the conference when he had opened it and, like most politicians today, obviously did not give priority to listen to the input of this high-level group present in the conference room.

I made these major points, trying to be as educative as I possibly could:

1) Look at conflicts as if they are problems to be solved – adhere to the peace research concept of the ABC conflict triangle and study A for Attitudes, B for Behaviour and C for the Contradiction/conflict that stands between people. (Cf. Johan Galtung). It’s a classical model that can be applied by virtually anyone.

2) Remember that there are always more than two parties to international conflicts – this is a kind of civil war but also part of the international wars – or aggressions – conducted since the assault on Afghanistan October 7, 2001.

3) Apply this model to another simple methods, namely that of Diagnosis, Prognosis and Treatment (DTP) – try to be conflict doctors instead of Realpoliticians. That is the only – only – way in which you can approach peace in the future and prevent a huge war with thousands of dead and much destruction.

So ABC and DPT – extremely simple for anyone who wants to understand conflict and help conflict-stricken peoples and countries to solve them and not just use conflicts as opportunities to promote one’s own more or less noble interests.

But he spoke of his next trip, I think to Paris, where the “Friends of Syria” – a group initiated by then-French President Sarkozy who was responsible for much of Libya’s destruction – were planning to meet. Intuitively I felt things were already going wrong there and then.

I then added a few words of caution based on the earlier wars and (humanitarian) interventions – think Yugoslavia and Iraq that I have experienced myself – wrote a book in Danish published already in 2004 with the title “Predictable Fiasco. The Iraq Conflict And Denmark As An Occupying Power” based on some 160 interviews with all kinds of people at various social levels in Baghdad, Babylon and Basra.

5) Do not send in arms and ammunition to Syria and do not take steps that will enhance the use of violence by any group.

6) Do not divide this extremely complex society into two parties, the good (opposition) and the evil (government/regime/Assad). Demonisation will only blur your own intellectual understanding and make you overlook important features of this conflict (as any other). There is no conflict in the world that has only two parties and there is no party in which all the good are gathered on one side and all the bad ones on the other. Conflicts tend to consist of many conflicting parties, of each party holding inner conflicts and of gray shades more than white and black.

7) No viable solutions can be found without the participation in a negotiated solution of the legitimate government of Syria.

Whatever you think of President Bashar al-Assad and the Syrian government, it is the legitimate representative of the sovereign state of The Syrian Arab Republic and a member of the UN. (I fail to remember whether Assad was, already at that point, consistently referred to as “the dictator” but he wasn’t earlier when in the early 2000s he introduced a series of reforms and more liberal economy and people talked about the Syrian Spring).

8 ) Consult with all parties, broadly defined – do not try to take people straight from the killing fields to a negotiation table. That table is the end station of a long process – and do not gather parties around such a table if you are not sure to achieve some kind of result because failed negotiations only confirm each party that it is impossible to work with the other side(s). Another reason for not supplying weapons to anyone is that the possession of weapons make people less prone to work for an agreement: they can always go back to the war zone and continue fighting for a better deal than at the table.

9) Do not look only at the Syrian government and institutions – include representatives of the Syrian people in everything you do. There is no sustainable peace if not rooted in peoples wishes and visions for the future. These 23 million people are anyhow the ones who must live together after the conflict, heal society and build it up again.

Syrian participants in this conference, not the least the woman emphasised this point again and again during the day: We can manage our own problems and don’t give us “help” we are not asking for).

10) The international so-called community can not be the final arbiter about a peace plan. NATO countries have, with their recent failed wars all over, very little legitimacy as peacemakers.

11) Make extended use of the UN and staf a mission to Syria with people from countries that have little immediate interests in any particular solution to the problems of the Middle East in general and Syria in particular. Take in some Buddhists, Daoists, Gandhians and whoever is not a Muslim or Christian but can look at Syria’s problem with a slightly more detached view, use them as leaders of such a large UN mission and as mediators.

In general, a UN mission in Syria with a clear peacebuilding – not peace-enforcement – mandate (without creep), staffed by thousands of the best people from non-Western member states and well-financed will be able to do a lot of good – at least much less harm than a new direct and indirect military intervention or proxy war.

12) Follow the UN Charter that states clearly that all civilian means shall be tried and found in vain before any military action can be taken and remember Article 1 that states that peace shall be established by peaceful means.

Now why do I tell you this?

It’s very simple: Every of these 12 conflict-resolution and peace points have been ignored by Denmark as well as everyone – everyone – who has dealt with Syria, one way of the other since 2011.

There is a direct link between this ignorance and the destruction of a city such as Aleppo. I visited Aleppo during its fall/liberation in mid-December 2016.

Below a few pictures that illustrate the consequences of ignoring every known and simple conflict and peace method and pursuing nationalist, racist and militarist policies. Peace was never an important factor in anything Western countries have done in and to Syria. No matter what they say.

If it were, this would not be the result. It’s easy to blame Syria and Russia for the destruction of Aleppo. Far far too easy. 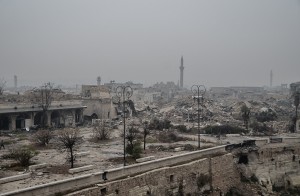 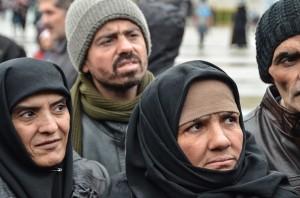 People from Eastern Aleppo who came over to the West and were cared for by the Syrian government in the Jibrin Reception Centre.
© Jan Oberg 2016 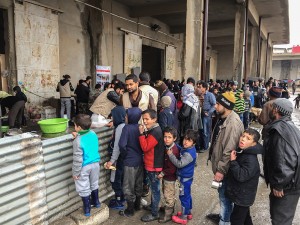 At the Jibrin Reception Centre in Western Aleppo. People from Eastern Aleppo get something to eat and medical aid after 4 years of hell in the Eastern part.
© Jan Oberg 2016 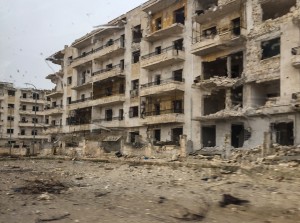