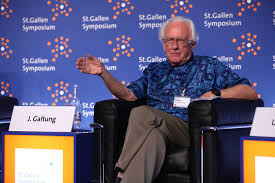 6 Dec 2016 – Johan Galtung, a Nobel Peace Prize-nominated sociologist who predicted the collapse of the Soviet Union, warned that US global power will collapse under the Donald Trump administration.

The Norwegian professor at the University of Hawaii and Transcend Peace University is recognized as the ‘founding father’ of peace and conflict studies as a scientific discipline. He has made numerous accurate predictions of major world events, most notably the collapse of the Soviet Empire.

Back in 2000, Galtung first set out his prediction that the “US empire” would collapse within 25 years.

Galtung has also accurately predicted the 1978 Iranian revolution; the Tiananmen Square uprising of 1989 in China; the economic crises of 1987, 2008 and 2011; and even the 9/11 attacks—among other events, according to the late Dietrich Fischer, academic director of the European University Center for Peace Studies.

Back in 2000, Galtung first set out his prediction that the “US empire” would collapse within 25 years. After the election of President Bush, though, he revised that forecast five years forward because, he argued, Bush’s policies of extreme militarism would be an accelerant.

After the election of Trump, I thought it might be prudent to check in with Galtung to see how he was feeling about the status of his US forecast. Galtung told Motherboard that Trump would probably continue this trajectory of accelerated decline—and may even make it happen quicker. Of course, with typical scientific caution, he said he would prefer to see what Trump’s actual policies are before voicing a clear verdict.

Galtung has doctoral degrees in both sociology and mathematics, and some decades ago developed a theory of “synchronizing and mutually reinforcing contradictions”, which he used to make his forecasts. The model was based on comparing the rise and fall of 10 historical empires.

In 1980, Galtung used his theoretical model to map the interaction of various social contradictions inside the Soviet empire, leading him to predict its demise within 10 years.

“Very few believed him at the time”, writes Dietrich Fischer in the main biography and anthology of Galtung’s works, Pioneer for Peace, “but it occurred on November 9, 1989, two months before his time limit, 1990.”

For the USSR, Galtung’s model identified five key structural contradictions in Soviet society which, he said, would inevitably lead to its fragmentation—unless the USSR underwent a complete transformation.

The model works like this: the more those contradictions deepen, the greater the likelihood they will result in a social crisis that could upend the existing order.

In the case of the USSR, the main structural contradictions were as follows: the working class was increasingly repressed and unable to self-organise through trade unions (ironic given the country’s Communist pretensions); the wealthier ‘bourgeoisie’ or elite had money to spend, but nothing to buy from domestic production, leading to economic stagnation; Russian intellectuals wanted more freedom of expression; minorities wanted more autonomy; and peasants wanted more freedom of movement

The model works like this: the more those contradictions deepen, the greater the likelihood they will result in a social crisis that could upend the existing order.

Eventually, as the highly centralised structures of the Soviet empire were unable to accommodate these intensifying pressures, the top-down structures would have to collapse.

Galtung later began to apply his model to the United States. In 1996, he wrote a scientific paper published by George Mason University’s Institute for Conflict Analysis & Resolution warning that “the USA will soon go the same way as [previous] imperial constructions… decline and fall.”

But the main book setting out Galtung’s fascinating forecast for the US is his 2009 book, The Fall of the American Empire—and then What?

The book sets out a whopping 15 “synchronizing and mutually reinforcing contradictions” afflicting the US, which he says will lead to US global power ending by 2020—within just four years. Galtung warned that during this phase of decline, the US was likely to go through a phase of reactionary “fascism”.

He argued that American fascism would come from a capacity for tremendous global violence; a vision of American exceptionalism as the “fittest nation”; a belief in a coming final war between good and evil; a cult of the strong state leading the fight of good against evil; and a cult of the “strong leader”.

Galtung warned that during this phase of decline, the US was likely to go through a phase of reactionary “fascism”.

All of which, Galtung said, surfaced during the Bush era, and which now appear to have come to fruition through Trump. Such fascism, he told Motherboard, is a symptom of the decline—lashing out in disbelief at the loss of power.

Among the 15 structural contradictions his model identifies as driving the decline, are:

Galtung’s book explores how the structural inability to resolve such contradictions will lead to the unravelling of US political power, both globally, and potentially even domestically.

Trump has made clear that he thinks US troops are still needed in Iraq and Afghanistan, and even proposed sending more troops to Iraq. He also said that we should have ‘grabbed’ the country’s oil. But he has also heavily (and incoherently) criticized US military policies.

Domestically, Trump has promised to deport 11 million illegal migrants, build a wall between the US and Mexico, compel all American Muslims to sign up to a government register, and ban all Muslim immigration to the US.

On the one hand, Trump might well offer an opportunity to avoid potential conflicts with great power rivals like Russia and China—on the other, he may still, stupidly, fight more unilateral wars and worsen domestic contradictions relating to minorities.

For Galtung, Trump’s incoherent policy proposals are evidence of the deeper structural decline of US power: “He [Trump] blunts contradictions with Russia, possibly with China, and seems to do also with North Korea. But he sharpens contradictions inside the USA”, such as in relation to minority rights.

On the one hand, Galtung said, Trump might well offer an opportunity to avoid potential conflicts with great power rivals like Russia and China—on the other, he may still, stupidly, fight more unilateral wars and worsen domestic contradictions relating to minorities.

Motherboard asked Galtung whether he thinks Trump would speed up his forecast of “collapse”, or slow it down.

Even if we give Trump the benefit of the doubt, he said, and assume that he “prefers solving underlying conflicts, particularly with Russia, to war—in other words for the US not be imperial—then yes, that still speeds up the decline from above, and from the center… Of course, what he does as a President remains to be seen.”

But what exactly is collapsing?

“An empire is more than violence around the world,” said Galtung. “It is a cross-border structure with a center, the imperial country, and a periphery, the client countries. The point about imperialism is to make the elites in the periphery do the jobs for the center.”

The center country may be a dictatorship or a democracy. So for Galtung, the collapse of the US empire comes “when the periphery elites no longer want to fight US wars, no longer want to exploit for the center.”

For Galtung, a key sign of collapse would be Trump’s attitude to NATO. The President-elect has said he would be happy to see NATO break-up if US allies aren’t willing to pay their dues. Trump’s ‘go it alone’ approach would, Galtung said, accelerate and undermine US global empire at the same time.

“The collapse has two faces,” said Galtung. “Other countries refuse to be ‘good allies: and the USA has to do the killing themselves, by bombing from high altitudes, drones steered by computer from an office, Special Forces killing all over the place. Both are happening today, except for Northern Europe, which supports these wars, for now. That will probably not continue beyond 2020, so I stand by that deadline.”

But this global collapse, also has potential domestic implications. Galtung warned that the decline of American power on the world stage would probably have a domestic impact that would undermine the internal cohesion of the United States:

“As a trans-border structure the collapse I am thinking of is global, not domestic. But it may have domestic repercussion, like white supremacists or even minorities like Hawaiians, Inuits, indigenous Americans, and black Americans doing the same, maybe arguing for the United States as community, confederation rather than a ‘union’.”

Galtung warned that the decline of American power on the world stage would probably have a domestic impact that would undermine the internal cohesion of the United States.

Galtung is not pessimistic about his forecasts, though. Having always seen the collapse of the “US empire” as inevitable—much like the collapse of the Soviet empire—he argues that there is real opportunity for a revitalization of the “American republic.”

The American republic is characterised by its dynamism, its support for the ideals of freedom and liberty, its productivity and creativity, and its cosmopolitanism toward the ‘other.’

Galtung’s answer is, perhaps, revealing: “If he manages to apologize deeply to all the groups he has insulted. And turn foreign policy from US interventions—soon 250 after Jefferson in Libya 1801—and not use wars (killing more than 20 million in 37 countries after 1945): A major revitalization! Certainly making ‘America Great Again’. We’ll see.” 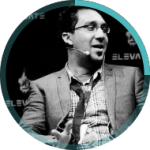 Nafeez Mosaddeq Ahmed, Ph.D. is a member of the TRANSCEND Network for Peace, Development and Environment and founder, editor-in-chief of INSURGE intelligence. He is an investigative journalist, bestselling author and international security scholar. He is the winner of a 2015 Project Censored Award, known as the ‘Alternative Pulitzer Prize’, for Outstanding Investigative Journalism for his Guardian work, and was selected in the Evening Standard’s ‘Power 1,000’ most globally influential Londoners. Nafeez has also written for TRANSCEND Media Service, The Independent, Sydney Morning Herald, The Age, The Scotsman, Foreign Policy, The Atlantic, Quartz, Prospect, New Statesman, Le Monde Diplomatique, New Internationalist, Counterpunch, Truthout, among others. He is a Visiting Research Fellow at the Faculty of Science and Technology at Anglia Ruskin University. He is the author of A User’s Guide to the Crisis of Civilization: And How to Save It (2010), and the scifi thriller novel Zero Point, among other books. His work on the root causes and covert operations linked to international terrorism officially contributed to the 9/11 Commission and the 7/7 Coroner’s Inquest.

5 Responses to “US Power Will Decline under Trump Says Johan Galtung, Futurist Who Predicted Soviet Collapse”