The abuse of Aboriginal prisoners with disabilities in Australian jails is confronting, and ongoing. In this special series Michael Brull profiles the shocking revelations uncovered in a report written by Human Rights Watch. Click on the numbers to read each of the other stories in the series – 2, 3, 4, 5.

15 Feb 2018 – For years, there has been considerable evidence of the significant discrimination visited upon Aboriginal people with disabilities in the criminal justice system. Research into this important issue is developing, and is shocking. It should be a national scandal, akin to the Don Dale revelations.

In late 2011, media attention began to grow in relation to Marlon Noble. Marlon is an Aboriginal man, who was imprisoned in Western Australia for 10 years for crimes there is no evidence he committed. The reason he was imprisoned that long is because the legal system provided for indefinite detention of people with mental disabilities, who were judged unfit to stand trial.

In 2012, a report by the Aboriginal Disability Justice Campaign (ADJC) explored the broader scale of the indefinite detention without trial of Aboriginal people. The ADJC found there were at least 30 Aboriginal people being detained without trial on this basis. This was based on their own research, as the government hasn’t provided statistics on this issue.

After news broke of the torture of Dylan Voller at Don Dale Youth Detention Centre, I spoke to Patrick McGee, the coordinator of the Aboriginal Disability Justice Campaign. He explained that a young Arrente man, “KA”, had a severe mental disability and was imprisoned after allegedly killing his uncle. 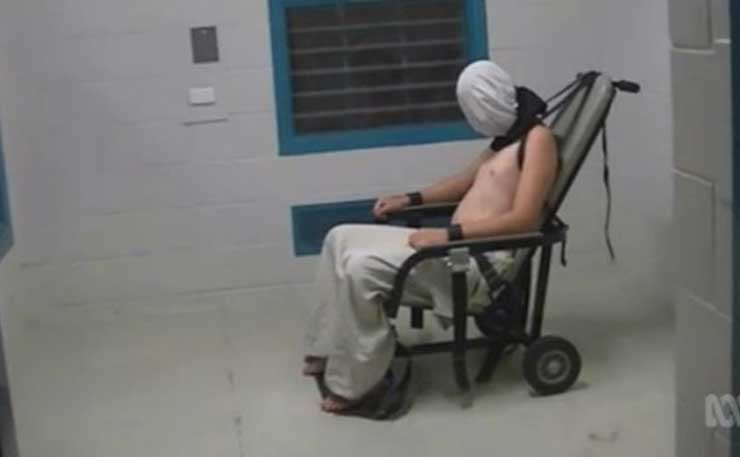 A screencap from the July 25 Four Corners program, showing Dylan Voller restrained in a chair, wearing a spit hood.

KA repeatedly banged his head against cell bars and walls. The prison responded by putting him in a restraint chair, and using chemical restraints on him. The prison doesn’t disclose to Patrick, the guardian of KA, when those restraints are used. He has to find out by carefully reading reports by the Department of Corrections submitted to the Northern Territory’s Supreme Court.

The restraint chair was used on KA at least 17 times from 2012-15. The longest period in the chair was for two and a half hours. Patrick strenuously opposes each use, and the prison ignores his objections. McGee argued that a maximum security prison was a totally inappropriate place for someone with a severe intellectual disability, which was not equipped to deal with KA’s complex needs.

It is in this context of growing awareness that the new Human Rights Watch report has emerged. Titled I Needed Help, Instead I Was Punished, it was researched and written by Kriti Sharma. Research and editing support was provided by other HRW staff.

The HRW team conducted 10 weeks of fieldwork in Queensland and Western Australia. Though they hoped to visit NSW prisons, the government ignored requests for cooperation, and didn’t facilitate access to NSW prisons. They interviewed 275 people, including 136 current or recently released prisoners with disabilities in the three states. 63 of those individuals were Aboriginal. They also interviewed prison staff, health workers, activists, academics, lawyers and others. They visited 14 prisons, and took pictures to illustrate their concerns about their conditions.

The resulting report, about the way people with disabilities are treated in prisons, is deeply harrowing. At the end of the report, HRW makes various recommendations. Like so many worthwhile reports in Aboriginal affairs, it is unlikely that most of their recommendations will be implemented, particularly without public pressure. Thus, I think their findings should be more widely disseminated.

The over-representation of each group connects to the wider institutionalised discrimination each community faces. For example, “The lack of comprehensive mental health and social services has created a pathway to prison for various at-risk populations in Australia. Many people with disabilities encounter the criminal justice system because of the difficulty of identifying and recognizing a disability, of understanding the necessary related support, and of providing adequate community-based health and social services.”

For Aboriginal people, their over-imprisonment rate is “ … integrally linked to the social and economic disadvantages that result from years of structural discrimination”. The incredible increase in the Aboriginal and Torres Strait Islander prison population of 88 per cent since 2004 (versus 28 per cent for non-Indigenous prisoners) “reflects over-policing of Aboriginal and Torres Strait Islander people, the introduction of more punitive laws, and changes in the way the criminal justice system treats offenders — for example, a rise in the number of prisoners on remand, more punitive sentencing laws and practices, and limited availability of non-custodial sentencing options”. 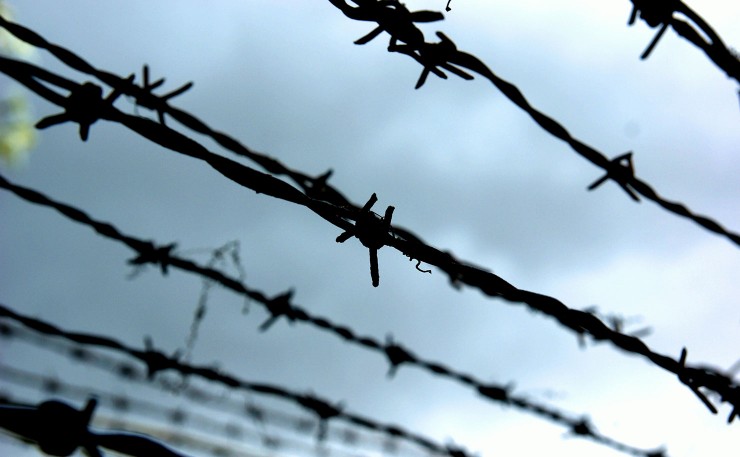 The Australian Human Rights Commission has identified systemic barriers preventing access to justice for people with disabilities. These can include lack of community support to prevent violence and disadvantage, to lack of support in the bail process.

People with “mild cognitive disabilities” can face particular disadvantages, as they are not judged as worthy of disability related government services and support. People with disabilities can also be viewed by the judiciary and police as unreliable and untrustworthy.

HRW went on to review a 2015 report on the detention across Australia of people with disabilities without trial. They found that at least 100 were so detained, and at least 50 were Aboriginal or Torres Strait Islander people.

The report then turns to the terrible bullying and abuse in prison. People with disabilities are particularly vulnerable, both to staff and other prisoners. They are often less capable of defending themselves, their complaints are regarded as less credible, and many prisoners are afraid of complaining about how they are treated due to fear of reprisals. This abuse can take the form of verbal, physical and sexual abuse.

HRW documented 32 cases of sexual violence and 41 cases of physical violence against prisoners with disabilities. These were perpetrated by fellow prisoners, or by prison staff. 15 of the victims of sexual abuse were female, 17 were against males.

Few reported their abuse, “due to shame or the fear of retaliation”. To give a sense of the scale, that makes some 23.5 per cent of prisoners and ex-prisoners interviewed stating they experienced sexual abuse, and some 30 per cent being subjected to physical abuse.

HRW also found evidence of systemic racial abuse. “In 11 out of 14 prisons,” they found “evidence of staff and prisoners expressing racism in language and behaviour towards Aboriginal and Torres Strait Islander prisoners. Racism in prison can manifest itself in many forms, such as name-calling, racial slurs, verbal abuse, harassment, biased treatment, and at times violence.”

Prisoners are also often subjected to abuse and insults for their disabilities. HRW found evidence of this in all the prisons visited. They found that “people with disabilities are repeatedly picked on, bullied, and harassed by other prisoners or prison staff due to their disability”. They “are seen as easy targets. Fellow prisoners mock and insult them, calling them a ‘spastic’ or ‘a waste of air.’ They are intimidated and blackmailed or cheated out of their cigarettes, food, or other belongings”.

Prisoners with disabilities often require carers in prison. Prison staff respond with the cost-saving measure of making other prisoners their carers. HRW reports that, “Prison staff said they make every effort to choose prisoner-carers carefully to ensure they will genuinely care for the prisoner with the disability.” In practice, this is not always what happens, especially given that prisoners with disabilities become extremely vulnerable to abuse by the prison carer.

In one of many shocking passages, HRW writes that a “senior nurse in Queensland said that six of the eight current carers were convicted sex offenders”:

The nurse thought this abuse “was happening ‘quite frequently,’ but that it was often not clear because men often do not tend to disclose such information freely. ‘At the end of the day at six o’clock,’ she said, ‘the prisoners are locked in here [all night]with their carers.’”

Due to this widespread abuse, “many prisoners with disabilities live in constant fear of others, in and out of cells, including during showers, meals, and recreation time. In overcrowded facilities, where people are forced to ‘double up’ in single cells, people with disabilities are often the targets of bullying.”

Michael Brull writes twice a week for New Matilda. He has written for a range of other publications, including Overland, Crikey, ABC’s Drum, the Guardian and elsewhere.