20 Aug 2018 – On August 15, 2018, the Associated Press (AP) reported about Akihito, the Japanese Emperor, with the following headline: “Japanese emperor tries to make amends for his father’s war“.

The headline of that article exactly expresses the Emperor Akihito’s struggle over peace through his agony and moral responsibility. In addition, the Emperor does not hesitate to express his opinion which clashes that of Prime Minister Shinzo Abe.  While the Emperor believes that it is his duty to protect the Peace Constitution, Abe intends to amend it. (See, for example: Is Japan’s Emperor Akihito Trying To Stop Abe?  Emperor Akihito Plays Defense on Japan’s Constitution.
Hirohito, Akihito’s father, was obviously one of the very main war criminals of WWII in the Asian-Pacific region. 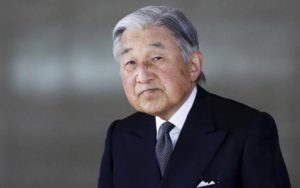 For example, among many others: Horrific Japanese Crimes in WWII That History Forgot. However, he did not take any substantial responsibility for that war. Besides, Douglas McArthur, the Supreme Commander for the Allied Powers (SCAP) did not prosecute Hirohito at the International Military Tribunal for Far East. There were two main war criminals who survived the war crime trial: Hirohito and Nobusuke Kishi. The former was not even prosecuted; the latter, Prime Minister Shizo Abe’s grandfather, was prosecuted but not sentenced. See Nobusuke Kishi, Ex-Tokyo Leader.  CONFIDENTIAL-Central Intelligence Agency: Nobusuke KISHI

It is unclear if Hirohito himself spoke about his own political and legal responsibility for that war. However, he had the role for WWII. (See New record of WWII role of Japanese emperor Hirohito: )  Not only that, he was warned not to begin the war. Nonetheless, he began the war in the Asia-Pacific region as part of WWII. (Japan: Hirohito warned attack on Pearl Harbor would be ‘self-destructive‘)  In the Constitution of the Empire of Japan, it was clearly stipulated that he was the supreme commander and, therefore, he was the supreme responsible person. 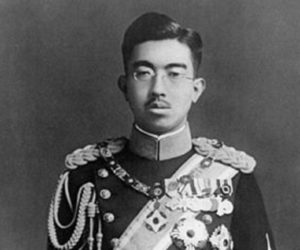 (See Articles 1, 11, 12, and 13 of the Constitution) Furthermore, in his statement at the official press conference on October 31, 1975, about the atomic bomb attacks, he stated, “I think that the atomic bombings were unavoidable.”  What did the citizens of Hiroshima and Nagasaki think about Hirohito’s words as such?

or the same press conference video around 2:40. 1975 昭和天皇初訪米＆初公式記者会見:

It seemed that the two atomic bomb attacks to Hiroshima and Nagasaki were not that definitive problems for Hirohito even though how desperately his people in Hiroshima and Nagasaki suffered. These two attacks were not attributed to Japan’s surrender. (See, for instance: The Bomb Didn’t Beat Japan … Stalin Did;  Researcher: U.S. Atomic Bombs Not Main Cause of Japan’s Surrender;  The Atomic Bombs and the Soviet Invasion: What Drove Japan’s Decision to Surrender?)

This implies that if the USSR did not invade Manchuria, Hirohito might have continued the war even if the United States dropped more atomic bombs into more Japanese cities. Were the untold sufferings of his people and virtually no possibility for winning the war not the reason for him to terminate the war by surrendering to the Allied Powers?

As such, it is debatable how much Hirohito was empathetic to his people then, especially near or at the end of the war when his country was catastrophic. For example, in his “Imperial Rescript on the Termination of the War”, Hirohito did not express his apology or remorse for giving enormous sufferings to his people, not to mention tremendous sufferings of peoples in the neighboring countries, which were caused by the Japanese military forces whose supreme commander was Hirohito himself. (See the full text of his Imperial Rescript in the official English translation)
Moreover, it was Hirohito’s idea, not the political pressure by the US government, that Okinawa was offered to the US military forces for their permanent use.

Hirohito sent his messenger to McArthur’s office for that purpose. Today almost all Okinawan citizens know that. (See  Enclosure to Dispatch No. 1293 dated September 22, 1947, from the United States Political Adviser for Japan, Tokyo, on the subject “Emperor of Japan’s Opinion Concerning the Future of the Ryukyu Islands“: and Okinawa) To this date Okinawa has been the US military main strategic focal point in Far East. Meanwhile, Okinawan residents’ sufferings have also been enormous.  (Japan’s Sacrificial Lamb – The Okinawa Military Base Controversy; US military in Okinawa: 70 years of crimes, militarism, pollution’;  Okinawa and the U.S. military, post 1945)

Hirohito began the war and ended it with a horrendous result. After that, he kept his mouth shut. Akihito saw the untold grief and disaster of his country when he was a child. He also saw his father’s “attitude” (i.e. keeping his mouth shut) after WWII toward millions of suffering people both inside and outside Japan. Probably Akihito learned lessons from his father.

Now, Akihito is carrying a huge and unbearable cross on his shoulders, created by his father, Hirohito. Akihito cannot avoid carrying it. He has been carrying it for decades. I am impressed by his courageous and sincere attitude. It is difficult to overcome one’s fear, caused by possible physical danger, for instance. It is far more difficult to overcome one’s ego and pride to accept the supreme political and moral responsibility for the sufferings of peoples, caused by the war that was declared by his father. Without any excuse or complaint, Akihito accepted his father’s tremendous scale of political and moral responsibility.

Quote
[O]ne of the duties that Emperor Akihito has apparently imposed on himself as the “symbol of the state” is his series of visits over the years to places, both in Japan and    abroad, that were the sites of fierce battles and devastation during the war — including Iwojima in 1994, Hiroshima, Nagasaki and Okinawa in 1995, Saipan in 2005, Peleliu Island in Palau in 2015 and to the Philippines in 2016.

According to people close to him, his visits to these sites were intended to pray for the souls of all the people who died in the war — not just the Japanese — and to keep the memories of the war from fading away.
Unquote

It may be said as follows: If Hirohito was the Emperor “of the Japanese Empire”, Akihito is the Emperor “for the Japanese people” and is a “sincere and empathetic neighbor” for peoples of the neighboring countries. (In this regard, see: Akihito reflects on peace in his last address on end of the war)

Akihito’s struggle for peace reminds me of one of Dag Hammarskjöld’s poems:

Satoshi Ashikaga is a member of the TRANSCEND Network for Peace Development Environment. Having worked as researcher, development program/project officer, legal protection/humanitarian assistance officer, human rights monitor-negotiator, managing-editor, and more, he prefers a peaceful and prudent life, especially that in communion with nature.  His previous work experiences, including those in war zones and war-torn zones, remind him of the invaluableness of peace.  His interest and/or expertise includes international affairs, international law, jurisprudence, economic and business affairs, project/operations or organizational management, geography, history, the environmental/ecological issues, audio/visual documentation of nature and culture, and more.

Anticopyright: Editorials and articles originated on TMS may be freely reprinted, disseminated, translated and used as background material, provided an acknowledgement and link to the source, TMS: Japanese Emperor’s Remorse and Efforts to Make Amends for His Father’s War, is included. Thank you.