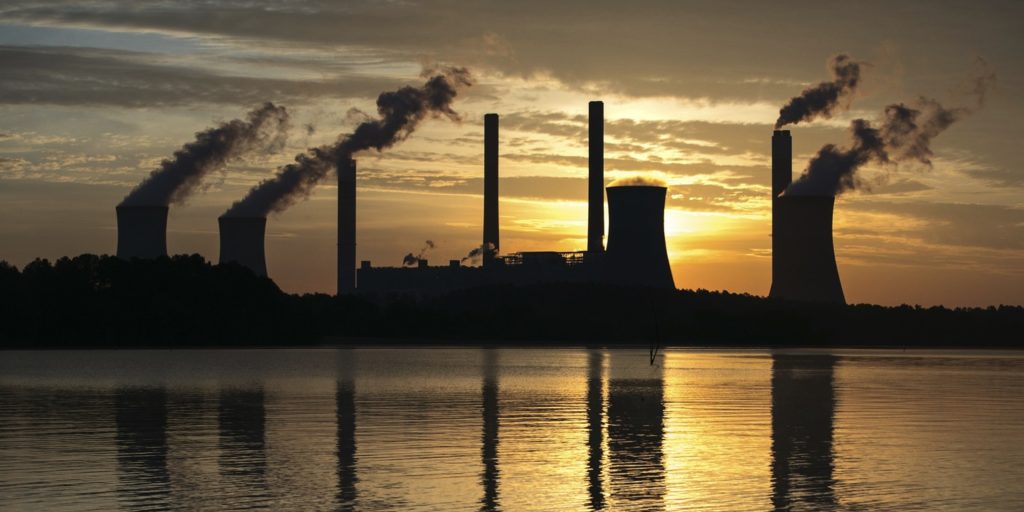 9 Oct 2018 – Around the middle of the last century, the chemical DDT was found to pose a risk to human and animal health. The ultimate response — after a prolonged fight between environmentalists and the chemical industry — was a federal ban on all uses of the substance found to be unsafe.

On Monday [8 Oct], the Intergovernmental Panel on Climate Change released a daunting report, suggesting that we are currently on track for around 3 degrees Celsius of warming caused by greenhouse gas emissions. The IPCC authors promise that we will see coastal cities swallowed by the sea, global food shortages, and $54 trillion in climate-associated costs as soon as 2040.

That fast-approaching catastrophe is the motivation for the demands of Global South residents and their allies, for whom rising tides and superstorms are already a reality. They’ve long chanted “1.5 to survive” through the fluorescent-lit halls of U.N. climate talks, and this new report — which outlines pathways to limit warming to 1.5 degrees Celsius — is a testament to that work. The figure is in line with the “well below 2 degrees” target outlined in the Paris Climate Agreement and, according to the co-chair of one of the IPCC working groups that crafted the report, Jim Skea, hitting that target “is possible within the laws of physics and chemistry.”

A social reaction on par to the approach to DDT, in other words, could yet salvage human civilization. It’ll be enormously difficult — far more so than getting a single chemical banned. And we’d eventually have to do it everywhere. Capitalism, moreover, wasn’t built around DDT the way it was around fossil fuels. “Limiting warming to 1.5 is not impossible,” IPCC chair Hoesung Lee said in a press conference last night, “but will require unprecedented transitions in all aspects of society.”

It’s not as if moving to phase out fossil fuels more directly would be unprecedented. Costa Rica is taking on the “titanic and beautiful task of abolishing the use of fossil fuels in our economy,” according to the country’s 38-year-old prime minister, Carlos Alvarado. In New Zealand, Prime Minister Jacinda Ardern’s Labour government has banned new oil exploration on the road to a zero-carbon economy.

Yet many of the policymaking conversations around curbing greenhouse gas emissions revolve around how to incentivize fossil fuel producers to gradually wean off their bread and butter through pricing mechanisms, rather than the kind of breakneck regulatory phase-out that would pre-empt economic and environmental ruin. Oil companies — eager to paint themselves as allies in the climate fight — welcome the approach. Several fossil fuel producers are now sponsoring efforts like the Climate Leadership Council, or CLC, and its carbon tax plan, which would kneecap the government’s ability to regulate carbon dioxide directly while levying a modest fee on emissions — high enough to continue disincentivizing coal, but too low to pose a threat to oil and gas. The plan would also pay out a yearly $2,000 dividend to individuals around the U.S., without using revenue to fund things like green infrastructure or research and development.

Amid the doom and gloom that tends to accompany climate stories, it’s easy to lose site of who’s largely responsible for today’s mess, and who should pay the highest price as we navigate through it.

“Almost 50% of global carbon emissions arise from the activities of around 10% of the global population, increasing to 70% of emissions from just 20% of citizens,” climate scientist Kevin Anderson wrote in response to the new report. “Impose a limit on the per-capita carbon footprint of the top 10% of global emitters, equivalent to that of an average European citizen, and global emissions could be reduced by one third in a matter of a year or two.” To wit, just 100 companies have been responsible for 71 percent of greenhouse gas emissions since 1988.

Anderson adds that “to genuinely reduce emissions in line with 2°C of warming requires a transformation in the productive capacity of society, reminiscent of the Marshall Plan,” and that there should be “[no] more second or very large homes, SUVs, business and first-class flights, or very high levels of consumption.”

Unlike the Paris Agreement — which never mentions fossil fuels — this new IPCC report makes it painfully obvious that avoiding that fate and meeting the Paris goals also relies largely on two things: scaling up zero-carbon energy sources and rapidly phasing coal, oil, and gas out of the world’s economies. In a press conference announcing the report Sunday, Skea spelled out the situation in response to a question from The Intercept: “I think the messages are quite clear. We have four different illustrative ways in which governments could think about how to keep global warming within 1.5 degrees, and they all involve really quite significant changes in the pattern of fossil fuel use.”

The Summary for Policymakers unveiled last night makes the case still more explicitly, via the pathways Skea referenced. Those forecasts count in various degrees of negative emissions that range from simple afforestation (planting trees) to the large-scale deployment of technologies like carbon dioxide removal, which remain untested at the scale necessary to make even a small dent in global emissions. Scenarios that build in more room for negative emissions have more gradual fossil fuel phase-out timelines, but also require leagues more faith that those technologies will be both workable and cost-effective in the coming decades. If there aren’t massive technological breakthroughs that allow them to be rolled out at a to-date unheard of level, report authors recommend that by 2030, the world’s economies phase out 78 percent of coal, 37 percent of oil, and 25 percent of gas relative to 2010 usage levels. By 2050, those figures are still more stark: Coal should decline by 97 percent, oil by 87 percent, and gas by 74 percent.

“Pathways limiting global warming to 1.5°C with no or limited overshoot,” the report concludes, “would require rapid and far-reaching transitions in energy, land, urban and infrastructure (including transport and buildings), and industrial systems. These systems transitions are unprecedented in terms of scale, but not necessarily in terms of speed, and imply deep emissions reductions in all sectors.” 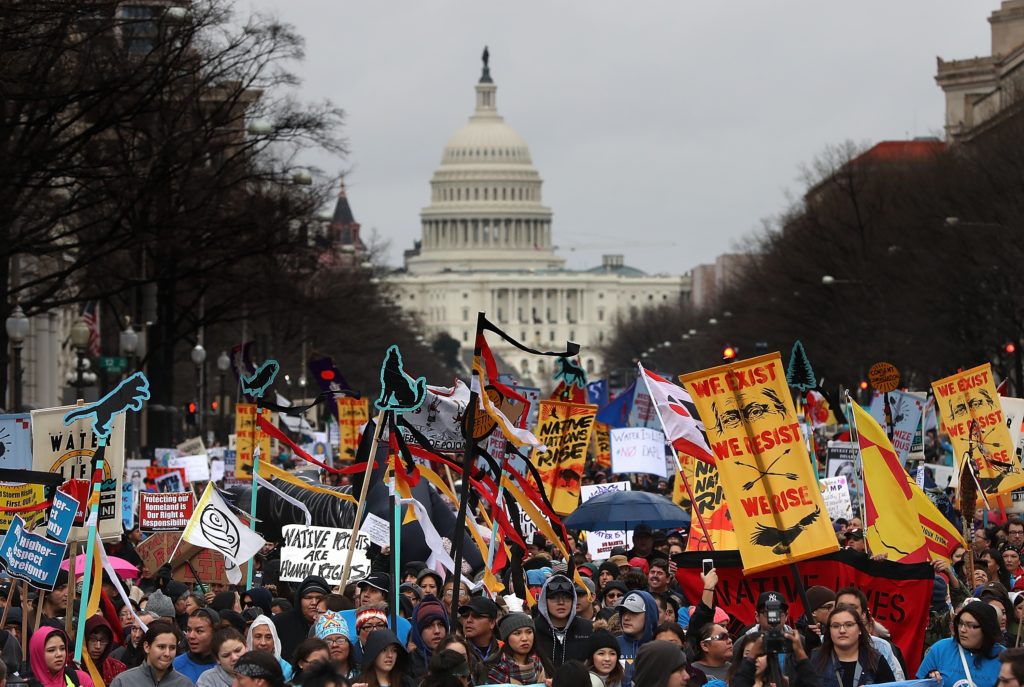 Protesters march during a demonstration against the Dakota Access Pipeline on March 10, 2017 in Washington, D.C. Photo: Justin Sullivan/Getty Images

At a bare minimum, we have to ditch fossil fuels to have a halfway decent shot at averting planetary catastrophe — as quickly as possible. “Keep It in the Ground” has for years been a demand of climate and environmental organizers fighting fossil fuel infrastructure projects like the Keystone XL and Dakota Access pipelines. Any honest reading of the IPCC’s new report suggests anyone committed to preserving a habitable Earth should agree.

As Nick Schulz, director of stakeholder relations at Exxon Mobil, told me after a CLC-sponsored event last month, “If you’re looking for a policy solution, you want the most efficient and most effective policy solution. If you talk to leading economists, they will say a carbon tax is the best you can do.” CLC founder Ted Halstead calls his plan a “Killer App” for climate policy, dubbing it the “most effective climate solution.” In a Fortune op-ed, he and former Federal Reserve chair Janet Yellen reiterated that “the plan’s reliance on a market-based carbon tax also makes it — in the view of economists of all stripes — the most cost-effective solution,” boasting about the support the CLC plan enjoys from the likes of BP, Exxon Mobil, and Shell.

Asked about that argument, Peter Erickson, senior scientist at the Stockholm Environmental Institute, wasn’t so eager to take the sage wisdom of economists at face value. “If you’re really agnostic as to who pays the cost and where the emission reductions come from, then [carbon pricing] is efficient. But the question of effectiveness is somewhat different. We have lives to save. We need to have a livable planet.”

“It’s not necessarily the case that we are going to be able to get there in the most cost-efficient way designed by economists using the same tools that they’ve laid out for decades. We’ve had plenty of experience with those — and we should keep trying — but we shouldn’t have blinders on to think that’s the only way to get there,” he added. “I try to approach it from the perspective of what do we need to maintain a livable Earth and humanity, not what do we need to appease the business community. From a science- and equity-based perspective, you need direct policies to get off of fossil fuels. We need more of the same in terms of subsidies to electric vehicles, but also bans on sales of new combustion vehicles, like they said they’re going to do in China. We need bans on new fossil fuel expansion.”

There’s also reason to suspect more indirect approaches simply aren’t taking the lead. A recent report from the Organization for Economic Cooperation and Development found that carbon prices worldwide are dangerously below where they would need to be to make a serious dent in emissions. Announcing that report, OECD Secretary General José Angel Gurría warned that “the gulf between today’s carbon prices and the actual cost of emissions to our planet is unacceptable.”

Few would argue that carbon pricing isn’t an essential piece of the climate policymaking puzzle and a common sense proposal. But it’s not the silver bullet Yellen and Halstead claim. Asked by HuffPost’s Alexander Kaufman whether carbon pricing alone could get the job done, several working group members laughed.

The widespread ban on DDT that passed in the U.S. eventually came to the U.K. Reflecting on the fight there, Martin Harper, of the Royal Society for the Protection of Birds, told The Guardian recently, “It took 10 years to get DDT banned after its effects had been demonstrated. And similarly today, when warned about a chemical’s danger, governments wait until research results are unequivocal. Then they suggest industry takes voluntary action. Only when that fails does it issue a ban, years too late.”