Cuban Compassion: Training Doctors for a Pacific Island Nation Running Out of Time

Boys play on a beach in Kiribati in 2014. Cuba is training doctors to tend to people on the Pacific island nation, struggling with disease amid the worsening effects of climate change.
(Shutterstock)

You may not know where it is.

Pronouncing it is tricky (Ker-a-bas). It’s a small republic of 114,000 people spread out over 32 atolls in the middle of the Pacific Ocean, near the international date line and right on the equator.

Palm trees line the white sandy shores. Turquoise water laps the sand. But is it an ideal island oasis? Hardly.

The battle of Tarawa, a horrific skirmish in the Second World War, took place on Kiribati. And now a climate change battle is crashing on its shores amid a crisis of tuberculosis, leprosy and other damnations.

Most of Kiribati sits about two metres above sea level. The Intergovernmental Panel on Climate Change estimates that sea levels will rise at least two metres before the year 2100. This gives Kiribati no more than 80 years.

Anote Tong, the former president of Kiribati, has said that for “Kiribati it is already too late” and that the international community should consider how people can migrate with dignity.

In response, Australia and New Zealand offer temporary escape, while Fiji sold 5,500 acres of its land to Kiribati for $8.77 million dollars. If all I-Kiribati, as the nation’s people are known, occupied this land the population density would be about 5,300 people per square kilometre. This violates the UNHCR’s minimum standards for refugee camps.

But as others work to help the I-Kiribati flee, Cuba encourages them to stay. Havana is training I-Kiribati physicians for free with the condition that they will return to work in their home country. Why?

First, let’s take a look at what New Zealand and Australia are proposing for Kiribati and other Pacific island nations.

“Pacific peoples have expressed desire to continue to live in their own countries, and current work is primarily focused on mitigating the impacts of climate change.”

If Pacific peoples want to stay on their islands, why do Australian and New Zealand aid programs have not-so-hidden agendas of moving people off of the atolls?

Certainly it’s more than Washington’s USAID, and Ottawa’s Global Affairs Canada — the foreign development branches of two countries with enormous carbon footprints — are doing for Kiribati. Neither country is offering any assistance to Kiribati.

Enter Cuba. The country is offering close to 40 medical scholarships to Kiribati, which will nearly double the country’s physician workforce, and all under the idea that they should remain on the atolls. 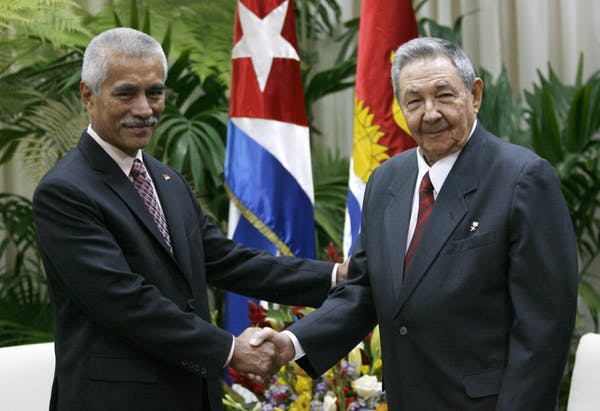 Beyond the climate tragedy, Kiribati faces compounding health calamities. Almost 700 cases of active tuberculosis were recorded in 2018, along with 155 new cases of leprosy. While these conditions are often treated at the hospital in Tarawa, there is little in place to prevent these maladies from occurring.

On top of this is a dengue crisis. Almost one in two children are stunted, and one in four adults have Type 2 diabetes. Both are the result of serious nutritional deficiencies. The lack of sanitation also makes the country’s lagoons toxic, making rainwater the only drinking water.

With only 59 physicians in the country, more are needed. Kiribati’s treatment of tuberculosis and leprosy meets basic needs, but almost nothing is in place for physicians to actively work on disease prevention.

Cuba’s medical education is well known for building community-level routines of health promotion around the world.

Aiming to improve health on Kiribati

Compare Cuba’s plan — to build better health from within Kiribati itself — to temporary work permits and a refugee settlement on an overcrowded parcel of land.

It’s a bold statement to offer a program that encourages skilled professionals to remain in the eye of the storm. And yet it reaffirms the “desire to remain,” as Lees-Galloway mentioned.

It also echoes Tong’s claim that by the time that Kiribati disappears, “no one will be immune from the catastrophic consequences of climate change.”

Extreme climatic events will alter human existence. And as they do, the question remains: How well will we take care of each other?

Will donor nations engage in development co-operation to foster health and livelihoods for a nation of future climate change migrants? Or will it come down to a few temporary visas for low-skilled workers who would otherwise be pressed into a refugee camp? Already, New Zealand has offered additional training and support to the I-Kiribiati graduates from Cuba working in the Pacific. Such support is encouraging.

But Cuba, in particular, offers a compelling example of how we can take care of each other during the climate crisis, regardless of where we are on the planet.

Kiribati is the first land to run out of time. Where will be next? And how will we take care of each other?

One Response to “Cuban Compassion: Training Doctors for a Pacific Island Nation Running Out of Time”