[Author’s Note: The 39th President of the United States (1977-1981), Jimmy Carter has been in the news recently, and we wish him well….  I consider him one of the great people I’ve had the honor of meeting.  Following his too-brief tenure in the White House, Carter worked gratis for decades with “Habitat for Humanity,” physically building and refurbishing houses for those in need…. In these noisy days of sham journalists, virulent political wrangling and pontificating “educators”—on every side of the philosophical spectrum–we pause to acknowledge a man who strove for peace during his presidential term, built houses for the poor after he left office, and found truths to share in the perdurable gemstones of words.—G.S.C.]

Review of “Always a Reckoning” by Jimmy Carter, Times Books

[Originally published in The Atlanta-Journal-Constitution, 25 Dec 1994] 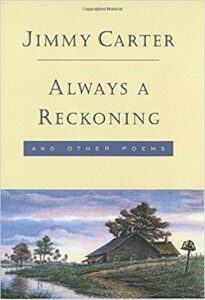 In the world of bluff and cant where politicians live, it’s unusual to find the intricate workings of a singular heart revealed in memorable verse.  Nevertheless, in his ninth book, former president Jimmy Carter takes a bold step to restore a measure of humanity to our public figures.  He peels back layers of feeling in simple, heartfelt poems.

There are two ways to look at this volume of 44 poems.  The first is biographical: Any utterance of a famous personage, being part of the historical record, has intrinsic value as a personal, barometric reading of an era.  The second approach is trickier: Forget the bio, forget the record—do these poems sing in and of themselves?

Whichever highway or byway one chooses, we come to an auspicious destination here.  Carter employs an easy, narrative, flowing line—in the tradition of Robert Frost or Edgar Lee Masters.  He writes with candor about his childhood–a favorite black teacher/companion; his loving, disciplinarian father and kind-hearted mother, “Miss Lillian”; and about his wife and helpmate, Rosalynn:

I’d pay to sit behind her, blind to what
was on the screen, and watch the image flicker
upon her hair.

Reading these poems, we get a deeper sense of the man behind the “presidential” image.  Or, more to the point, we get a better sense of how much the man and his image melded.  The Carter revealed here is the same man who tilled the soil for peace in the Middle East and made human rights the moral compass of his Administration.  He is a man of sensitivity, boldness of vision, and basic decency. 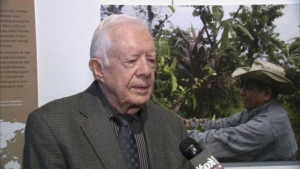 But, is he a poet?  The answer lies in the following lines from “Light Comes in Turkey Country”:

This is the best use of sound in the volume—meanings and sensations crammed into a singing density.  The “m’s” knit with sibilant “s’s” and liquid “l’s” and “r’s” that illuminate and particularize the mixed sensations of a morning hunt.  This is what poets do by instinct and by training.

As with any poet, there are lapses, as in the beginning of “Mister Woodruff and Old Bess”:

Life was hard in those Depression years.
Money was scarce, and swaps the way
we had to trade.  Mister Woodruff,
at his stable, used to say
that no one got the best of him.

One wishes Mr. Woodruff had more to say or could have said it better!  Likewise, the first line is a throw-away.  There are poems in the volume that are too “talky” and prosaic, too much like journal entries.  “Ars longa, vita brevis,” the Romans used to say.  Which roughly translates into: “It’s pretty darn hard to get this stuff right!”

When Carter does get it right, his words deserve inclusion in any fine anthology of American verse.  In “A Reflection of Beauty in Washington,” he renders what Robert Frost called “a momentary stay against confusion.”  From the White House roof, under a dark

sky: “suddenly we heard a sound/ primeval in its tone and rhythm.”  Turning, the writer espies: “long-wavering v’s/ breasts transformed to brilliance/ by the lights we would have dimmed.”

Perspective, specificity, apropos sounds and echoes are the hallmarks of poetry, and Carter demonstrates these qualities in “Life on a Killer Submarine,” turning the hunt around:

…in spite of everything
we did to keep our sounds suppressed,
the gradient sea could focus, too,
our muffled noise.

I eagerly await more poems like this one, and the White House poems—poems that effloresce out of Carter’s extraordinary life.  I hope he will continue to pull back layers of feeling about the great events he witnessed and shaped, and will continue to plumb his themes: digging for meanings hidden under surfaces, and justly reckoning accounts.

Poetry is an oft-disparaged art today.  But, in publishing this book—handsomely illustrated by Sarah Elizabeth Chuldenko—the president-poet from Plains claims for it the central place it once had in our lives, and claims for himself a mantle worthy of his office and the Ages.

Dr. Gary Corseri is a member of the TRANSCEND Network for Peace Development Environment. He has published/posted poems, articles, fiction and dramas at Transcend Media Service and hundreds of publications and websites worldwide.  He has performed his work at the Carter Presidential Library and his dramas have been produced on PBS-Atlanta.  He edited the “Manifestations” literary anthology.  He has published 2 novels and 2 poetry collections, has taught in US public schools and prisons and in US and Japanese universities. Contact: Gary_Corseri@comcast.net.

Anticopyright: Editorials and articles originated on TMS may be freely reprinted, disseminated, translated and used as background material, provided an acknowledgement and link to the source, TMS: Poet Inhabits the Heart of Jimmy Carter, is included. Thank you.