Syria: The Human Cost of War

No Turning Back: Life, Loss and Hope in Wartime Syria, by Rania Abouzeid (London: Oneworld Publications, 2018) 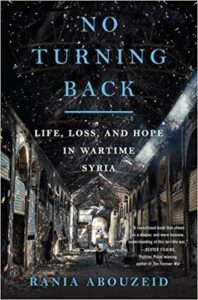 A moving book by Lebanese journalist Rania Abouzlid. As an Arabic speaker, she was able to move in Syrian society to interview a range of Syrians caught up in the violence.  She was also able to interview Syrian refugees in Turkey, Jordan and Lebanon, sometimes the same persons that she had interviewed first in Syria.  As a writer for U.S. journals, she was also often in the USA and so was able to follow the evolution of U.S. policy toward the Syrian conflict (to the extent that there is a policy.)

“Syria has ceased to exist as a unified state except in memories and on maps.  In its place are many Syrias.  The war there has become a conflict where the dead are not merely nameless, reduced to figures.  They are not even numbers.  In mid 2013, the United Nations abandoned trying to count Syria’s casualties due to the difficulty of verifying information, although estimates put the death toll at well over 500,000 people.  Half of Syria’s population of twenty-three million is now displaced.  No life is inconsequential.  Each is a thread in a communal tapestry, holding the larger intact.”

The book is an effort to give color and shape to these threads of the tapestry. However, few of those interviewed were authorities or civil servants of the al-Assad-led government. She explains,

“In the summer of 2011, I was blacklisted by the Syrian regime, but not as a journalist.  Instead, I was branded a spy for several foreign states, placed on the wanted list of three of the four main intelligence directories in Damascus, and banned from entering the country.  This forced me to focus on the rebel side by illegally trekking across the Turkish border into northern Syria, although I still managed a few trips to government held areas.”

As her interviews highlight, the “rebel side” is highly diverse.  There are interviews with 10 men who had been part of the government’s military and who defected and joined the Free Syrian Army.

There are also 10 interviews with members of the Jabhat al-Nusra, an offshoot of the Islamic State (ISIS).  Most of these men were in opposition to the government well before the fighting began, often being held in prison.  They describe the conditions in the prisons – one motivation for their later actions. 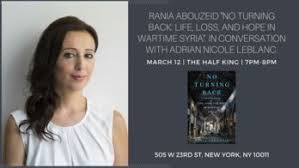 There are also interviews with people who before the armed conflict had been lawyers, students, non-governmental organization activists.  They were swept up by the violence and were forced into refugee states in other countries.

The title of the book No Turning Back is a strong image of the avalanche that is armed conflict.  Once the violence starts, there is no turning back.  One can only discuss “what is next?” once one has reached the bottom of the mountain.

We seem to be near the end of the avalanche and reaching the bottom of the mountain in Syria.  With Russian-Turkish cooperation in northeast Syria and with the possibility of a “Constitutional Committee” that would slightly increase the support base of the al-Assad government to meet in Geneva, most possibilities of the future have been set out.  The cost in the lives of people is well set out in the book. The reference to “Hope” in the title is less obvious, but it is a book well worth reading.

Anticopyright: Editorials and articles originated on TMS may be freely reprinted, disseminated, translated and used as background material, provided an acknowledgement and link to the source, TMS: Syria: The Human Cost of War, is included. Thank you.