Bolivia’s Evo Morales Steps Down: Reaction from Latin America and Beyond

11 Nov 2019 – A round-up of international reactions to the news of the resignation of Latin America’s longest-serving leader. 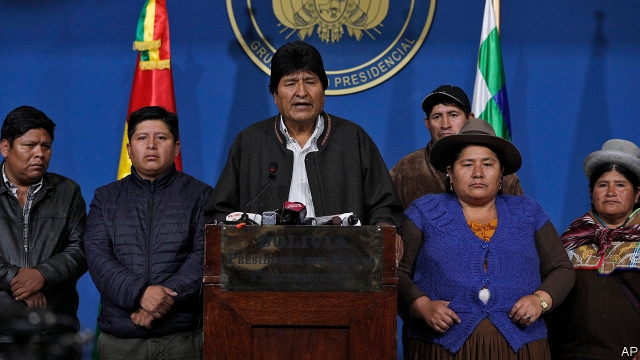 Evo Morales has stepped down as Bolivia‘s president after the military encouraged him to leave the post to ensure stability following weeks of protests against his disputed re-election.

In a televised address on Sunday, Latin America’s longest-serving leader, said he was resigning for the “good of the country”.

“I want to tell you, brothers and sisters, that the fight does not end here,” Morales said from his stronghold in the Chapare region in central Bolivia.

“We will continue this fight for equality, for peace,” the 60-year-old added, who has said he is the victim of a “coup”.

The announcements prompted celebrations but there were also reports of violent unrest erupting in the administrative capital, La Paz, in the city of El Alto and other parts of the country.

Morales said his house in Cochabamba was attacked by “violent groups” and, on Twitter, accused police of issuing an “illegal” warrant for his arrest.

Bolivia’s police chief denied the claim in a television interview on Sunday, while the military said in a statement that it was launching air and land operations to “neutralise” groups acting unlawfully.

The resignation of the last survivor of the so-called “pink tide”, which ushered in leftist governments in Latin America two decades ago, prompted reaction across the region and beyond.

Here’s a round-up of international responses to the latest developments.

Antonio Guterres, the UN secretary-general, expressed deep concern about the situation in Bolivia, according to his spokesman.

“It was similar to those tragic events that gripped our Latin American [continent] last century,” said Ebrard, who assumed his role after a leftist party won Mexico‘s election in July last year.

“Mexico will maintain its position of respect for democracy and institutions.”

Ebrard added that Mexico had already received 20 members “of the Bolivian executive and legislative in its official residence in La Paz,” adding that his country would offer Morales asylum if he sought it.

One Response to “Bolivia’s Evo Morales Steps Down: Reaction from Latin America and Beyond”