Industrial Agriculture, Based on War Technologies, Kills Millions of Species: Agroecology Is the Future

It Is Driving the Sixth Mass Extinction

On 6 August 1945 the atomic bomb was dropped on Hiroshima which immediately killed 80,000 people with tens of thousands more dying later as a result of radiation. As we remember the innocent victims, let us also think of the innocent victims killed in concentration camps and during the war as a result of the chemicals of war of the Poison Cartel.   This war and the poisoning continues.

These war technologies gave rise to chemical-based industrial agriculture, which is continuing to kill millions of species, driving the sixth mass extinction. Species are disappearing at 1000 times the normal rate as toxics and poisons spread to every corner of the world. The Amazon and Argentinian forests and savannas, so rich in biodiversity, are being destroyed to grow GMO soya.

The world is facing an ecological and climate emergency, a food and health emergency, driven by industrial agriculture and the chemicals of the Poison Cartel.

In India, 300,000 farmers have now committed suicide and half the children are malnourished as a result of this industrial, globalised model of agriculture that poisons the earth, displaces farmers and replaces real food with commodities for trade.

Every 5 seconds a child under 5 dies because of hunger. Every year 9 million people die of hunger. According to the FAO more than 1 billion people suffer from hunger, including in rich countries where food is abundant.  This means that 1 in every 6 people on Earth don’t get enough food to live a healthy life.

Every year 200,000 people die of pesticide poisoning. Every sixth death in the world is due to cancer, making it the second leading cause of death (second only to cardiovascular diseases). Only 5% of cancers are genetic. The rest are due to toxics in the environment and in our food.  In 2017, 9.6 million people are estimated to have died from the various forms of cancer.  WHO has identified Glyphosate as a carcinogen.  Bayer and Monsanto have now 18,000 cases filed against them in US courts for causing cancers.

50% of the GHG driving climate change are emitted by the industrial food system. According to the WHO climate disasters result in over 60 000 deaths every year.

The Poison Cartel has given us decades of ecocide and genocide through its war chemicals.

As the alternative to chemical based industrial agriculture, Agroecology has been well proven. This includes all chemical free ecological farming systems, including Organic Farming, Permaculture, Biodynamic Agriculture, and different schools of natural farming.

The multidimensional crises facing the world today can be addressed by returning to our Agroecological Roots.

The 10 elements of Agroecology are:

The word for life in Hindi is Jiva and living is “Jaivik”. That is why ecological agriculture and Agroecology in India is referred to as “Jaivik Kheti”.   We are a civilisation that has upheld Diversity at the highest levels.

As The Rig Veda reminded us:

Ekam Sad Vipra Bahudha Vadanti
The Real is one, the learned speak of it variously

What is called Organic Farming today is the distillation of 10,000 years of Agroecological knowledge of India. In 1905, more than a hundred years ago, the British sent their agricultural ‘guru’, Albert Howard, to “improve” Indian agriculture and set up the Pusa Institute. When he arrived he found the soils fertile and no pests in the fields.  So instead he made the Indian peasant his Professor. He then wrote his classic An Agricultural Testament based on India’s indigenous Agroecological sciences. Howard talks about how Indian peasants learnt to farm in “Nature’s ways” and made farming as permanent as the forest by applying Nature’s principles of diversity and law of return in agriculture.

It is inaccurate to present organic as if only organic that is “certified” and “organic industry” is organic.

Organic is not a product. It is not a mere technique.

It is a world view and a set of principles. And these principles are derived from nature and are the basis of our indigenous Agroecological traditions.

The organic world view is based on the principle of non separation and awareness of humans being part of a living world, in contrast to the mechanistic, industrial world view which sees humans as masters and manipulators of nature.

For over a century, Organic farming has evolved as a sophisticated system with a scientific foundation in Agroecology, a regulatory system that excludes GMOs, and an economic system from the local to the global level that provides an alternative to the ecocide and genocidal industrial model promoted by the Poison Cartel .

For this reason the Cartel is orchestrating an aggressive attack on organic farming in every country of the world where it is a significant alternative.

20 years ago, when I sued Monsanto in the Indian Supreme Court,  the company began spreading the falsehood that I was importing the Western concept of “Organic” to India. I responded by organising the Howard lectures, to remind that it was India that gifted Organic to the world. The Soil Association which was formed based on Howard’s book, and prominent global leaders, including Prince Charles and the late Edward affirmed their gratitude to India during their lectures for being the source of inspiration for the global organic movement. We honoured also Indian organic teachers like Nammalvar and Narayan Reddy .

It is therefore scientifically misleading to present organic farming as “imported” to India and to pit natural versus organic, as is becoming fashionable in some circles, as part of the divide and rule policy of the Poison Cartel.

Because organic philosophy, standards and systems exclude GMOs, the Poison Cartel is attacking organic to destroy the alternative that people have turned to for chemical and GMO free food.

Confusion is being created about organic so as to sneak in GMOs. Those being used by the Poison Cartel are unscientifically claiming that GMOs such as Bt cotton can be part of Natural farming.

India is being diverted and misled to prevent us from our turning to our ecological roots and knowledge to address the emergency in our country and to defend our sovereignty.

The Poison Cartel is propping up and supporting people who promote GMOs, and are calling Organic more dangerous than an Atom Bomb.

Calling Organic “worse than an atom bomb “ is to be ignorant of India’s agriculture history, and of the roots of the international organic movement in India’s ancient indigenous traditions. It is in effect an attack on India’s Ecological Civilisation and Indigenous Knowledge.  It is becoming an instrument of the Poison Cartel who wants to destroy our seed sovereignty, food sovereignty  and knowledge sovereignty.

The latest ploy of the Poison Cartel is to try and destroy India’s rich Agroecological traditions and practices with a strange, undefined beast named “Zero Budget Farming”.

The richness of imagination of our oneness with nature and our languages are being extinguished by an imported and imposed phrase – Zero Budget Farming – which is meaningless in Indian languages, but also in English . The Dictionary clearly states the meaning of budget as “an estimate of income and expenditure for a set period of time.”

Budget does not mean expenditure alone, it also includes income.

For a farmer, Zero budget Farming will mean zero income. This is a recipe for making sure the agrarian crisis continues, farm incomes keep falling and drop to zero. This will create the future the Poison Cartel wants, one of farming without farmers.  The farmer will not gain, the corporations will.

Zero Budget Farming is a corporate driven agenda to empty our minds of knowledge and intelligence to make sustainable and just choices, and empty the farmers’ pockets. “Zero Budget” is Mente Nullius, to create empty minds which cannot think and decide for themselves.

The AP experiment with zero budget farming is not based on Zero Budget for the state because it is supported by billions of dollars of loans which will have to be paid back.

The AP experiment also violates the core 10 elements of Agroecology synthesised by FAO from inputs from communities and scientists from across the world.

The future is based on diverse Agroecological Systems in India and across the world, not the continuation of the rule of the Poison Cartel which will accelerate the current emergency, with more farmers committing suicide, more children dying of hunger and malnutrition, more climate catastrophes, more species extinction.

This industrial war against the Earth and its people must be stopped, for bringing peace with the Earth, and the health and survival of its citizens. 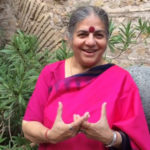 2 Responses to “Industrial Agriculture, Based on War Technologies, Kills Millions of Species: Agroecology Is the Future”