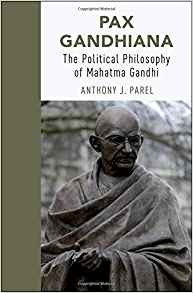 In a world where mainstream studies of peace and politics are dominated by what passes for realism and what passes for world order, the distinguished Gandhi scholar Anthony Parel has derived from a close study of Gandhi’s works a political philosophy that promises in the long run to be more realistic than the so-called realists.   It rests on a deeper order, an order in the human soul, than the global political and economic order established after World War II whose current disintegration mainstream scholars are now lamenting.

Fareed Zakaria has in recent years written a series of elegant polemics against ‘illiberal democracy,’ updating in many ways the older arguments of the classics of liberalism and of Karl Popper that if we desire, as most of us do and all of us should, civilized human relations, we must steer clear of what Popper called ‘tribalism’ and von Hayek called ‘fatal arrogance.’  We must avoid mixing true liberal capitalism with socialism, populism, religion, economic nationalism, personality cults, and/or ethnic identity.

There have been any number of works on one or another ‘crisis of governability.’ Most of them hold, for example Norberto Bobbio’s The Future of Democracy, that if democracy is to survive it must limit its ambitions to what can be accomplished within the framework of the currently dominant basic cultural structure.  The World Economic Forum recently concluded its 2019 annual meeting announcing a series of initiatives under the heading ‘Globalization 4.0: Shaping a Global Architecture in the Age of the Fourth Industrial Revolution.’

Although all of the above can be mined searching for points of light pointing toward necessary fundamental cultural change, on the whole they mostly remain in a broad sense within the confines of what Anthony Parel, in an earlier work defined as ‘the Machiavellian cosmos.’  This earlier work was not just a scholarly study of Niccolò Machiavelli (1469-1527).  It traced the hegemony of themes typical of that thinker in modern life.   As such, it provides a foil for his studies of the very different cosmos in which Mahatma Gandhi lived and moved and had his being.

Even human rights, which are commonly construed as the antithesis of Machiavellian thinking, can be read in more than one way.  We would suggest that one of them is Machiavellian in Parel’s sense. The 1948 Universal Declaration of Human Rights can be read as the normative basis of the Post World War II global order that promised social democracy but could not deliver it.  Instead, that promise transmuted itself into neoliberalism.

In today’s context, human rights can also be read as primarily and fundamentally the four first-generation rights of 1789 (liberty, property, security, and the right to revolt); while the social rights of 1948 are read juridically as merely aspirations, and read politically, again echoing a consensus of scholars including Bobbio, as unrealizable.  This second reading of human rights, so prominent in our challenging times when the very survival of humanity and the biosphere requires fundamental change, fits the pattern of what Parel calls the Machiavellian Cosmos as we understand it.

Parel’s writings on Gandhi, including Pax Gandhiana, are clearly intended to offer an alternative to humanity’s current impasse. Parel clearly takes his stand, as a Gandhi scholar, in another cosmos, another way of reading reality and of reading what it means to be human, calling for a new civilization with ancient roots.  Key terms of its discourse are dharma, artha, kama and moksha. (Simplifying:  virtue, order, shared prosperity, spiritual transcendence).   As Gandhiji once said, clearly separating his views from the dominant ones now failing us, ahimsa’s first premise is seeing every person, not just as an abstract idea but as a passionate conviction, as a soul.

Pax Gandhiana is about the Gita teaching of renunciation of the fruit of one’s actions, while immersing oneself in politics and economics. It is about swaraj and swadeshi. Simplifying again:   One key kind of swaraj, spiritual swaraj means freeing oneself from internal bondage through spiritual self-discipline.    Swadeshi is local self-reliance.

Gandhi reframed and subordinated the prevalent profit motive of economics and employed benevolence and social affection as fuel to increase the economic growth of a nation. According to him, the wealth of a nation consisted more in persons who enjoyed a good quality of life both materially and ethically than in possession of goods.  He never considered the right to private property as absolute. Practically, property was subject to the condition of meeting legitimate needs of the political community in which one lived. Regarding the use of one/s property, Gandhi proposed his well-known theory of trusteeship, a theory that (consciously or not) echoed Christian doctrines of stewardship and servanthood.

Neither does Parel represent Gandhi as infallible.  Gandhi himself described his life as a series of experiments with truth.  But every experiment runs the risk that the hypothesis it is testing is false, and indeed, Gandhi frequently changed his mind (see, for example, the third page of Chapter 5 of Pax Gandhiana)

Gandhi also described himself as a servant and his life as a series of opportunities for service.   But every would-be servant of humanity (or would-be Samaritan serving one particular person in need) runs the risk of doing harm intending to do good.    In this respect every conscientious human being, speaking and acting from any tradition whatever, or from no tradition at all, is fallible.

In tracing the development of his political philosophy, Pax Gandhiana portrays Gandhi as an exemplar of a human being persistently trying (and sometimes failing and learning from failure) to do the right as God (or ‘Truth”) gave him the light to see the right.

Anthony J. Parel is emeritus professor of political science at the University of Calgary.

Anticopyright: Editorials and articles originated on TMS may be freely reprinted, disseminated, translated and used as background material, provided an acknowledgement and link to the source, TMS: Pax Gandhiana: The Political Philosophy of Mahatma Gandhi, is included. Thank you.

One Response to “Pax Gandhiana: The Political Philosophy of Mahatma Gandhi”