Welcome to Hawaii’s ‘Plastic Beach’, One of the World’s Dirtiest Places

Hawaii has long evoked images of a Pacific paradise but Kamilo Beach, located on the Big Island, presents a starkly different reality.

10 Jan 2020 – An array of plastic crunched underfoot as Mattie Mae Larson walked down Kamilo Beach. Toothbrushes, a plastic broom, a leaking bottle, the back of a TV.

Larson used to come to this remote stretch of Hawaiian sand as a child to climb 10ft-high mountains of debris, searching for treasures.

“As kids, we called it plastic beach,” she recalls. But today she’s back with a different mission.

Kamilo Beach, located on the south-eastern tip of Hawaii’s Big Island, has been dubbed one of the most plastic-polluted spots on the planet. On a bright day last summer, Larson and fellow members of the Hawaii Wildlife Fund (HWF), a team of conservation volunteers, collected 1,400lb of it.

Hawaii has long evoked images of a remote Pacific paradise, a land of pristine beaches and extraordinary biodiversity. But its unique location has forced the islands to reckon with an unwelcome guest: plastic debris washing up in vast quantities, sullying its waters and threatening its marine life. A 2019 study published in the journal Proceedings of the National Academy of Sciences found that Hawaiian fish begin eating plastic particles just days after being born.

For Larson and other activists, Kamilo Beach has become ground zero of the crisis. 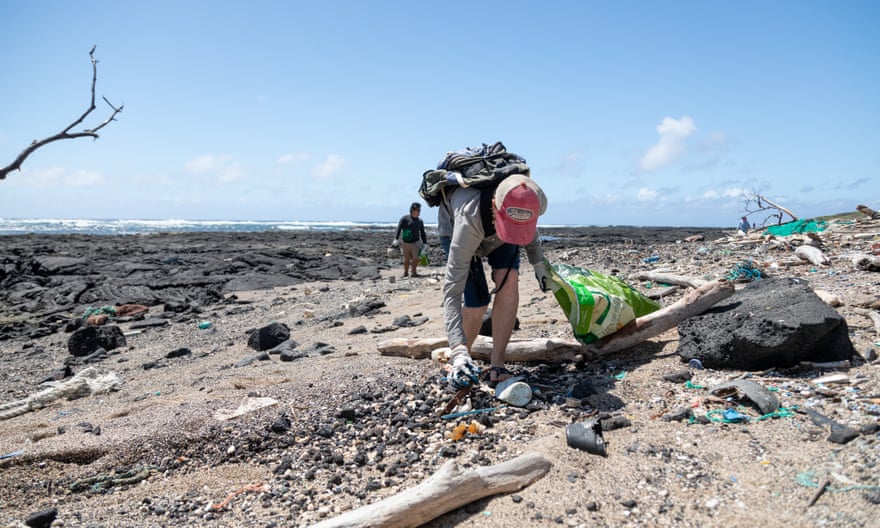 Hawaii sits at the center of swirling ocean currents, just east of the Great Pacific garbage patch. As a result, its shoreline catches plastic from all over the world, some of it decades old. Just a few weeks prior, Larson found a vintage Sea and Ski tanning lotion bottle, most likely from the 1950s.

On Kamilo Beach, plastic pollution accumulated unchecked for decades due to inaccessibility. The very first cleanup here was organized after the group’s founder, Bill Gilmartin, witnessed the birth of a rare Hawaiian monk seal pup on the massive piles of plastic. In 2003, he led a team in removing more than 50 tons of marine debris over three days.

Regular cleanups have prevented the return of 10ft tall piles of plastic, but daily debris continues to trickle in, with no end in sight. HWF estimates that between 15 and 20 tons of debris wash up here annually, and that 96% of it is plastic. The group has so far removed 283 tons of plastic debris from the shores of Hawai’i island, and a significant portion has been from this location alone.

Larson and her team divide into two groups. Each participant is tasked with collecting a specific type of plastic, which will be categorized and recorded.

Along the wide beach, plastic is ever present. The waves crashing on jagged black lava rocks glisten with blue, pink and white flecks of microplastic. The soft white sand is speckled with a variety of household items – a plastic spoon, the end of a broom, the sole of a shoe, half a dustpan. Many items are covered in barnacles and algae acquired from unknown years of ocean travel. 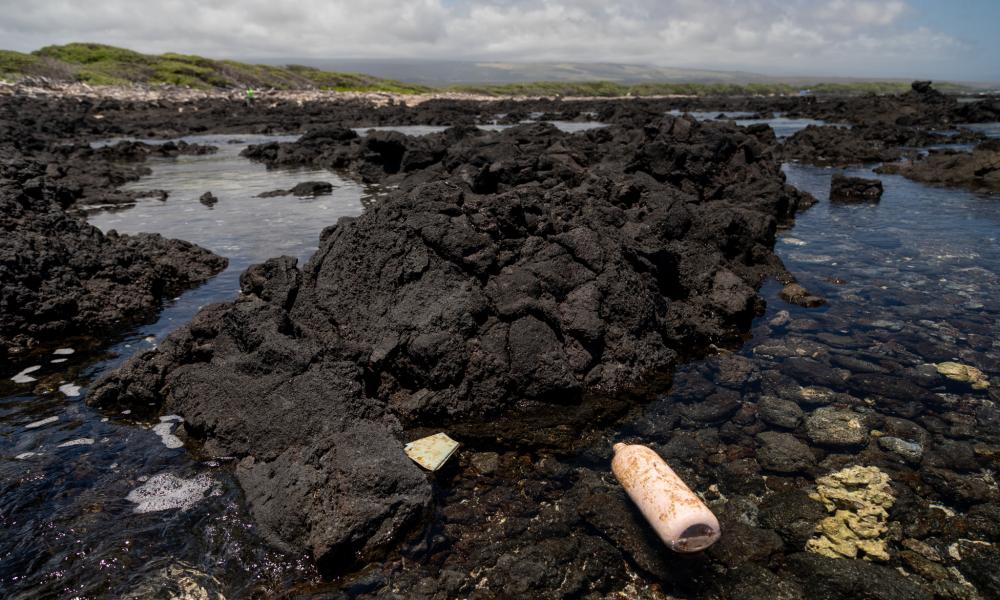 Kamilo Beach has been dubbed one of the most plastic-polluted spots on the planet.
Liz Barney/The Guardian 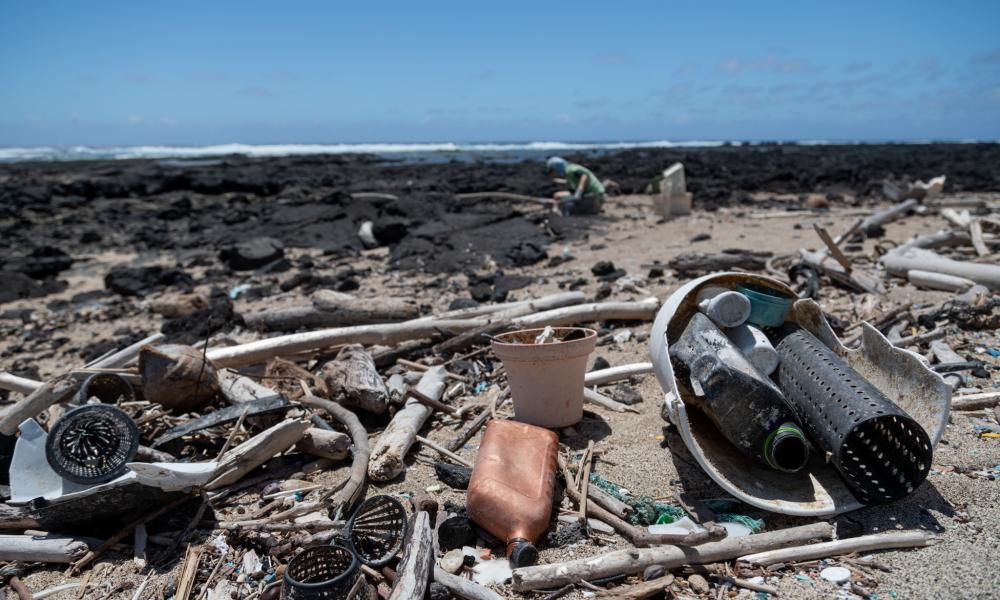 A cleanup on Hawaii’s Kamilo Beach, which has been inundated with plastic waste.
Liz Barney/The Guardian

In many ways, Larson’s shifting relationship with plastic mirrors that of wider society – once hailed as a wonder-material, plastic is now a reviled pollutant found on every corner of the planet and deep inside our bodies. “Literally, plastic was so cool when I was growing up in the 90s,” Larson says. “You had to have slap bracelets and banana clips in order not to be teased at school.”

“It’s crazy to look back on that perspective,” she says. “I remember having one of these moments in a college geology class where everything flashes in front of your face and I realized, oh my God, that’s not right, that’s my plastic, and fish are eating that.”

Longtime residents describe a transformation of their homeland from pure to plastic-riddled. Roger Bialas, who has been spearfishing around Oahu for over 30 years, says the waters “used to be crystal clear”.

“It was like swimming in an aquarium. Every color of fish you could think of.” Now he sees a lot of “food wrappers, shopping bags”, as well as fishing lines.

“Sometimes after being in the ocean, back on land, my skin feels dirty,” he adds. 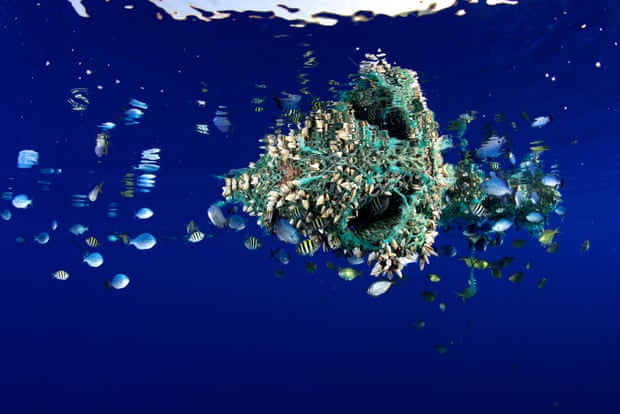 Reef fish, commonly eaten by local fishermen, are often the most likely to consume plastic particles, but the contamination doesn’t stop there. Many of those reef fish are eaten by larger fish, such as tuna, which absorb the plastics into their fatty tissues. In a culture that celebrates fresh fish and raw dishes such as poke, many fear for the health repercussions.

Ted Clark is a spearfisher and glass sculptor who shares his catch with family, neighbors, and others in need of food. He lives on the east side of Oahu, and has seen the plastic trash increase over the last decade.

“I hate cutting out plastic from fish,” he says, explaining that fish do not know the difference between plastic and food, especially when they’re in a feeding frenzy.

At a 400-year-old fishpond in Kāne‘ohe Bay on Oahu – one of many built by ancient Hawaiians that allowed saltwater in through the porous rocks, while keeping fish from escaping – plastic trash collects on the high watermark along its rock walls, according to Rosalyn “Roz” Ku‘uleimomi Rubio Dias Concepcion.

“I’ve definitely seen an increase in plastic washing up on shore since I’ve started, and I would have to say in the last three to four years it’s become more of an issue,” she says.

Concepcion described the plastic debris that floats around and into the Waikalua Loko fishpond as “a constant thing”. Crates, bottles, straws and nets, she said, also wash into the fishpond during the “extreme high tides”. She says they’ve found fish in the pond and surrounding bay eating algae that grows off the floating plastic. “They are digesting the very fine, fine microparticles. Then you find it’s in their stomach.” 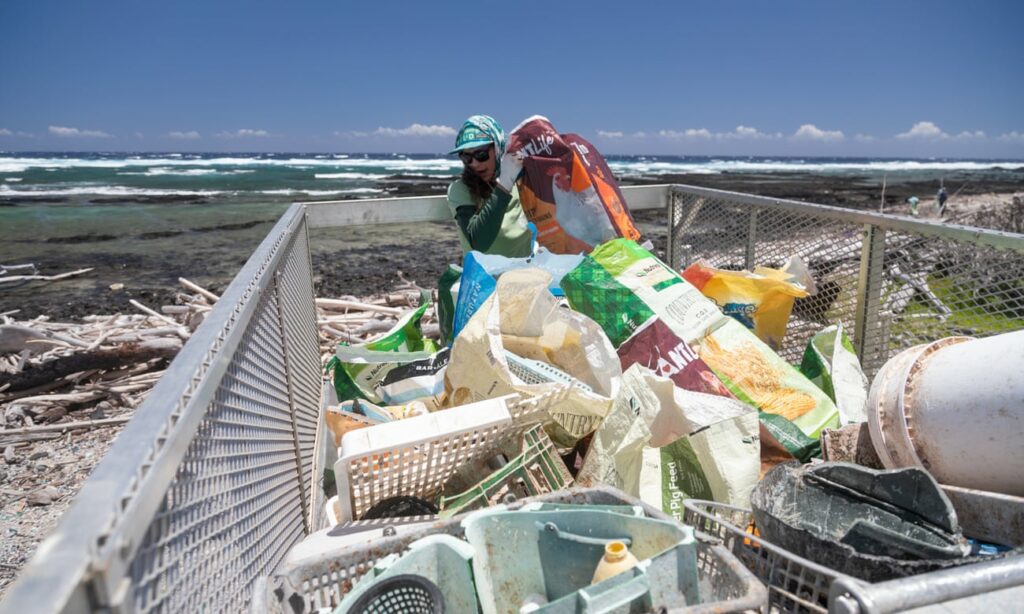 Hawaii’s efforts to push back on rampant plastics consumption have been among the boldest in the country. In 2015, it became the first state in the US to ban plastic bags at grocery stores. Earlier this year, Maui and the Big Island banned polystyrene containers. And Honolulu, the state’s capital, in December passed one of the most restrictive plastic bans in the US, prohibiting all single-use plastic food containers, including straws and utensils, as well as Styrofoam.

Steven Colbert, the department chair of the marine science program at the University of Hawaiʻi at Hilo, describes the bans as positive steps, saying the state needs to reduce its dependence on these materials as well as figure out ways to prevent them from getting into the environment.

“Here’s the thing about the chemistry of plastic, it will never go away.”
— Megan Lamson

“A lot of those Styrofoam containers were being used to take your plate lunch down to go to the beach to eat it,” says Colbert. “And then they weren’t being disposed of properly and that Styrofoam was getting into our oceans.”

Data collected by the HWF has been used in support of legislation to reduce plastic use.

“Here’s the thing about the chemistry of plastic, it will never go away,” says Megan Lamson, a scientist and cleanup volunteer with HWF. “When your bathtub is overflowing, you have to turn off the water before you start baling.”

Her words ring truer here than on the mainland US – when you’re surrounded by thousands of miles of blue Pacific, making plastic “go away” is a challenge. The state’s landfills are reaching capacity, forcing the local counties to look for alternatives.

As a result of market volatility in the wake of China’s new limits on plastic imports, Hawaii county officials announced in October that they would no longer accept plastic recycling, diverting thousands of tons of additional waste to landfill. Kauai county, meanwhile, has also begun landfilling once-recyclable plastics, while on Oahu, most trash is now being incinerated. 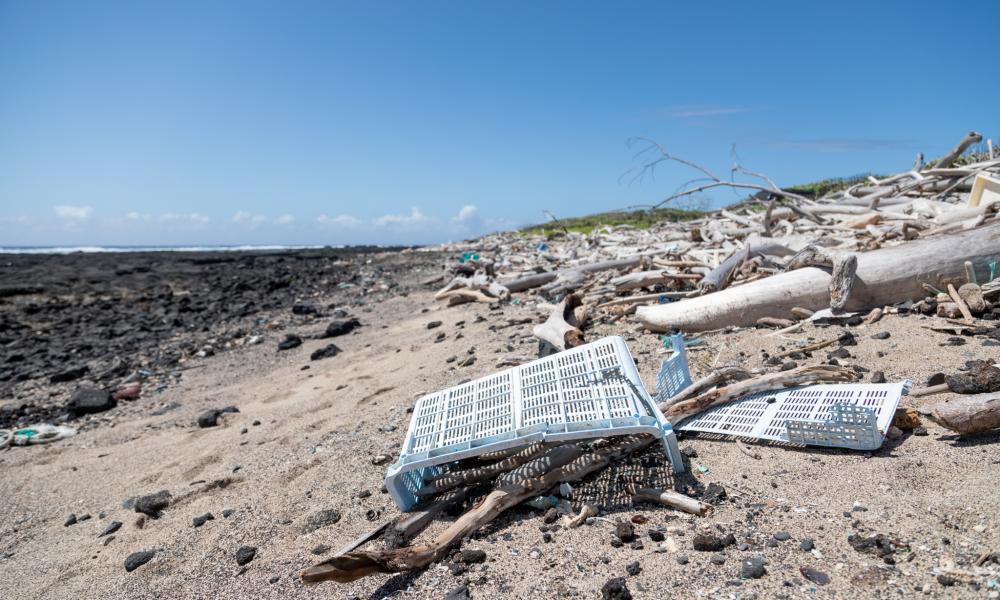 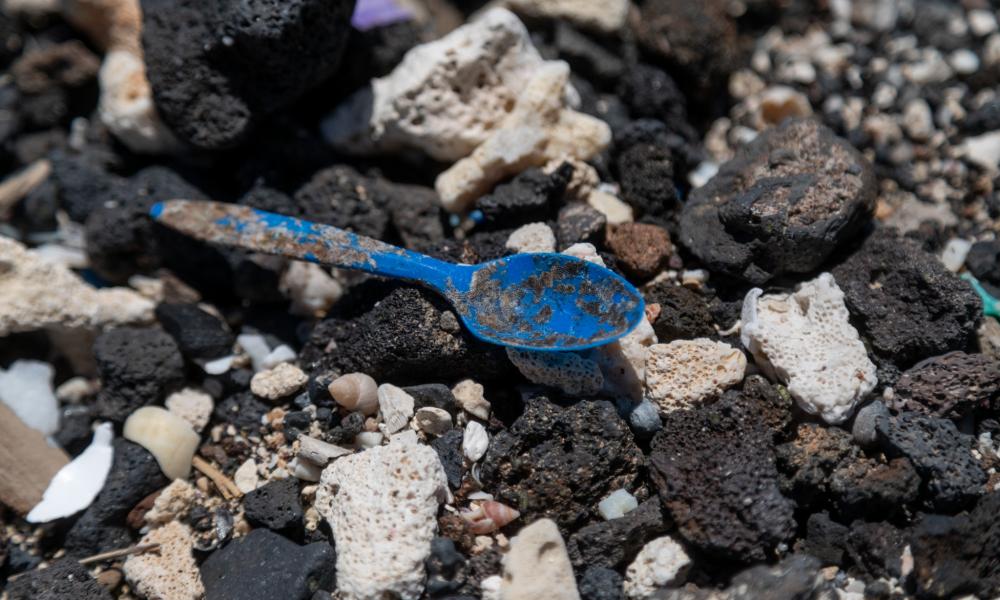 Hawaii’s efforts to push back on rampant plastics consumption have been among the boldest in the country. Liz Barney/The Guardian

“We are in a literal state of emergency when it comes to our municipal waste,” says Lamson.

Most experts agree that without big changes in the way corporations produce and consumers use plastics, places like Hawaii will continue to bear the brunt of the planet’s dependency.

In the meantime, volunteers continue to fight the rising tide, piece by piece.

Back at Kamilo, a group of Canadian engineers prepared to test the Hoola One, a vacuum-like machine that collects sand and separates the microplastics. These tiny fragments, formed when plastic breaks down, are the greatest challenge during beach cleanups.

Read more: The missing 99%: why can’t we find the vast majority of ocean plastic?

The group glanced nervously at each other, admitting they were not expecting such rough roads. The machine sits on the back of a trailer with small tires not equipped for off-roading on jagged lava rock. But the group remained hopeful.

A few days later, they report back. The machine removed 230lb of microplastics in just a few days.

It’s only a start, and there’s a long way to go. But the crew doesn’t plan on giving up. “If we can clean up Kamilo,” says Samuel Duval, a Hoola One engineer, “we can clean up anywhere in the world.”

Liz Barney is a freelance writer and photographer based in Honolulu. Her work focuses on active living and the outdoors.

Michelle Broder Van Dyke is a writer from Honolulu, Hawaii. Her work focuses on news from the Pacific region.