NATO’s Destruction of Serbia: And Where Is Serbia, China and the West Today?

Independent Kosovo was established – against UN SC resolution 1244. Thanks to the Clinton administration and Madeleine Albright. CNN’s Amanpour endorsed it generously on TV with her State Department husband, James Rubin, a chief operator in the non-negotiations at Rambouillet. And TIME, of course, knew the truth too.

Serbia suffered tremendously from the 78 days of indiscriminate, hard bombing. I know because I was there.

Finally, Serbia and its president Milosevic was threatened with total destruction of Belgrade. And gave in.

Western hubris after the Cold War was won? Of course!

Russia was on its knees. International law and the UN Charter sidelined. Militarism embraced. Full-spectrum dominance. The winner takes it all! Right – but with the risk of losing it all later. It’s called hubris.

Oh, what ignorance. Hardly 5 foreign ministry people in Europe knew a thing about the complexities of Yugoslavia. 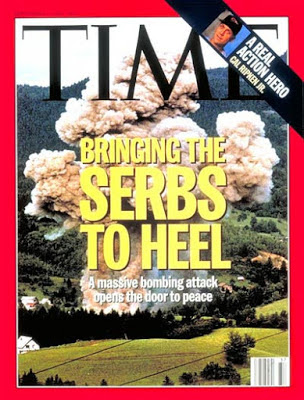 Kosovo – the 2nd Albanian state in Europe – still doesn’t function. Hardliners in that war are still leaders, protected by the Americans who back then called Kosovo “ours” – I know because I interviewed them in Prishtina.

Serbia – moving ahead with no more illusions about a decent treatment by the EU or the US. It’s now Europe’s main friend of China (whose embassy NATO bombed by so-called accident). Huge Chinese air bridge of aid to Serbia these very corona days.

China – well you know what has happened there the last 20 years. And how it is the main builder of a new world order.

NATO – outdated and sharing little but inner conflicts because it should have been closed down when the Soviet Union and the Warsaw Pact dissolved.

The EU – unable to handle Yugoslavia, 2015 refugees, Iran/JCPOA or helping its Spanish and Italian brothers and sisters with the corona. China is able.

The US – moving towards (more) authoritarianism and inner dissolution, rioting and revolver violence: Wait and see how the coronavirus’ political dynamics will play out there…

For all the West – A world order loser in deep inner structural crisis.

Yugoslavia was a game-changer – TFF said it then and warned about all the Western actions in the most comprehensive ever peace and conflict study of Yugoslavia – a good 2000 A4 pages equivalent.

No, not written years after but while it happened. Predictions more precise than any government’s.

And with lots of alternatives and peace plans lined up too. Because there were alternatives to the destruction of that country and to the bombing for Kosovo. But everything done was – peace-prevention:

Yugoslavia – What Should Have Been Done?

Sadly, the West is destroying itself because of militarist hubris. There is no one it can blame for its manifest destiny downwards – except, of course, the Serbs, Russians, Chinese and Iranians and …

3 Responses to “NATO’s Destruction of Serbia: And Where Is Serbia, China and the West Today?”