28 Sep 2020 – “What is Google?” is a question that is often asked. Is it a library; is it a teacher, a search engine, an internet browser, a digital platform, or all of the above?

Whether you want to know about some historical or political facts, or you want to brush up on your knowledge of some aspect of science, Google usually has all the answers and often some beautiful pictures or diagrams to explain some puzzles.

Do you want to know who the last Czar of Russia was, or who defeated Napoleon when he wanted to conquer Russia? The answers are all available. In fact you will also find interesting information about Napoleon and how he was he defeated; you will also come to know about how the institution of czarism ended in the country.

Politics is all pervasive these days. There is vast reportage in the social media regarding the presidential election to be held in USA later this year and what are the possibilities of Donald Trump being re-elected. All this information is not likely to be available on the Google at present, but if you want to know any fact about earlier presidents and why no woman has yet been elected as US President, you will not be disappointed by this search engine.

Similarly, a lot of information is available about Chinese politics including that of Mao Tse Tung, and how China has become an economic superpower. Knowledge of Chinese language, its culture, population, its relationship with Taiwan or with Japan and neighbouring countries, can also be determined to a fair amount of accuracy.

Mahatma Gandhi is a universal figure today due to his contribution to nonviolence, truth, religious amity, love for the sanctity of our Earth. If any details about any of these aspects or of his struggle for freedom against the British government are required, just go to the Google teacher. One should also mention that he had deep interaction with some South African leaders such as Nelson Mandela and Bishop Tutu inspiring them to struggle against the colonial government. Mandela was imprisoned for many years but at the end he became the first president of a free government.

Recognising his struggles, Gandhi’s birth anniversary — October 2, is now designated as the International Day of Nonviolence by the United Nations. He named his autobiography My Experiments with Truth, which stresses his attachment to this important aspect of life.

Who discovered the concept and importance of zero, how the Roman system of writing large numbers was irksome and some related questions can be answered on Google. In fact, a professor of mathematics in an Indian university once confessed that he was not familiar with some information regarding the number theory provided. The contribution of the Indian mathematician Ramanujan and his association with G H Hardy of Cambridge, who realised the genius of the Indian, is also highlighted.

How yoga is becoming popular in many parts of the globe as a means of mental and physical fitness can be easily appreciated by people. On India’s initiative, 21 June has been designated by the United Nations as the International Day of Yoga.

Those who may be interested in languages of the world and their growth, in classical languages such as Greek, Latin and Sanskrit, their current status and number of speakers, can find interesting information in this search engine. Also how different languages have interacted with each other. For example, not many may know that Persian was the official language of the Mughal emperors in India for over three centuries; one can find a countless number of Persian words commonly used in the Hindi language even today. Portugal also occupied some eastern part of India. A few Portuguese words are also found in modern Hindi language.

Not only languages interacted with each other, religions also do so. Buddhism travelled from India to many countries of the East including Cambodia, Burma, China, Japan and other regions. Similarly Christianity travelled from place to place due to movement of colonial powers. Islam has moved from Arabia to Iran, Afghanistan, India and beyond to Indonesia (the latter) which is home to largest number of Muslims in the world with India having the second largest number even though it was truncated in 1947 into Pakistan and what is now Bangladesh. As Islam reached Iran, people believing in previous religions such as Zoroastrianism travelled to India for shelter.

Those who love to travel by car to new destinations in a particular city, find the Google Maps very useful, in fact indispensable. Before, one would need to stop at some point and enquire where a particular place was and how to go there. Not anymore.

It is no surprising that the CEO of Google, Sundar Pichai, of India, and his contributions over the years to bring it to preeminence are suitably stressed. A few of his pictures, after he joined Google in 2004, display his evolution over the years both as a person and as a contributor to Google’s growth. 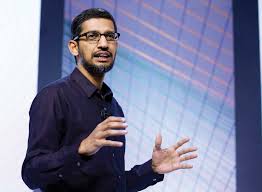 On a personal, egoistic note, my name also figures on Google in the discipline of   Peace Research and as a contributor to various articles posted on the TMS Weekly Digest. There is another person by the same name — he is a neurosurgeon but I don’t know him.

I should not say anything more about myself lest the TMS Editor rejects my essay for this reason.

Anticopyright: Editorials and articles originated on TMS may be freely reprinted, disseminated, translated and used as background material, provided an acknowledgement and link to the source, TMS: Googling in Today’s World, is included. Thank you.