Why the US Is Falling–and Faster than You May Expect: A 40-Year-Old Prediction Coming True 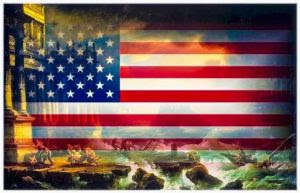 30 Sep 2020 – The unique, dominating position of the United States in the post-1945 world is well-known. It maintains this position thanks to both a very large historical goodwill capital and former glory in the eyes of generations around the world – and thanks to rampant militarism and imperialism that has destroyed the good ‘America’ that it used to be.

The world’s major division the next few years will be this: Are you on the side of continued US global dominance or do you want to see a new multipolar world with more balance and the US in the role of a partner among equals?

In my view, the US no longer has the capacity to lead itself effectively and find solutions to its own multi-dimensional crisis be it the economy, democracy, climate change, warfare addiction, social polarization, racism and on top of it all the Covid-19 crisis.

Not being able to lead itself, no one should wish that the US should lead the world. Neither does it have any right to.

While its allies, friends and admirers are increasingly turning sceptical, others turn away and look for other partners be it China, Russia or Iran.

While the friends of the US should try to help it out of its addiction to its outdated self-image, the designated enemies, of course, cannot help the US as it simply would not listen. Strangely, these countries also need the US and have sought and still seek constructive cooperation but in vain.

The fact is that no one threatens the US (and certainly not Russia with less than 8 % of the military expenditures of NATO. The US has become its own worst enemy but blames others for its problems.

Sadly, it seems that there is not one ministry of foreign affairs among the EU /NATO countries that has even thought of developing a strategy for the post-US dominated West.

Countries such as China, other BRICS and many others are building a new world order. Will the West, therefore, loose completely, or will parts of it still be able to save what can be saved and transition into the future multipolar world order?

The chances of a “yes” to that question is diminishing by the day.

The list of twenty points below was written long before the Presidential candidate debate on September 29 (it would be an offence to children to say that they behaved like children). But that debate only confirmed these points – and the simple point that it doesn’t matter much whether the next president of the US will be Trump or Biden.

It’s the system, stupid! And it is rapidly coming to an end.

It’s a valid intellectual-theoretical point that one cannot apply characteristics from psychology – basically the science of the individual – to much larger aggregates such as people, nations or the global system. That’s the fallacy of levels.

That said, let’s anyhow try to just a bit of such “psychologizing” to make it more familiar to the reader.

“And faster than you may expect”?

One should hesitate to appear too sure about predicting the final end. Sometimes terminally ill people live longer than medical expertise predicted. Taking the risk anyhow, I would say within the next presidential term 2021-2026 or at the latest by 2030.

When the cracks are frequent enough and big enough, the decline and breakdown accelerate exponentially. Remember the end of the Cold War in 1989 when border guards just opened the gates and people started moving feely.

In a Danish academic book from 1981 (1) I predicted the fall of the West thus:

“The Western world is on its way down and the present crisis is not just cyclical and also not just a crisis of capitalism (it is not exclusively economic) but a sort of civilizational crisis. The global system that has existed with Europe-US as its centre and developed over the last 400-500 years is going through convulsions of a deeper nature than is normally perceived.

Neither liberalism nor Marxism which are both Western thought systems and neither the US nor the Soviet Union appears as attractive models to the rest of the world. They are in deep crisis themselves – socially as well as economically – while Japan, China and a series of new growth centres and regional larger powers are rising, particularly in Asia.

The wealthy, overdeveloped countries are approaching certain ‘objective’ limitations in terms of nature, raw materials, exploitation of human beings, the sheer size of the systems as well as management problems, social pressures, etc.

Armament and the increasing militarization of various types of social structures everywhere is an (attempt at) “rejuvenation treatment” in the old- age phase of the West, a sort of compensation for diminishing power in other areas.”

Conclusion: Governments, businesses, academia and others who in these years hold on to the US Empire will become a periphery in the future world order.

Prof. Jan Oberg, Ph.D. is director of the Transnational Foundation for Peace and Future Research, TFF and a member of the TRANSCEND Network for Peace Development Environment.

One Response to “Why the US Is Falling–and Faster than You May Expect: A 40-Year-Old Prediction Coming True”