Martin Luther King: The Saint Honored by the Government That Shot Him in the Face … A “Forgotten” Extrajudicial Political Assassination [?] 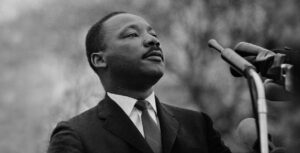 Martin Luther King, Jr. Day was signed into law as a federal holiday in 1983. I do not wish to trivialize this accomplishment: it took great persistence by civil society groups and it had to conquer serious opposition. Yet what it has established is an indigestible paradox in the nation’s list of saints and heroes.

Recall that the jury in the 1999 civil trial examining the assassination reached a startling conclusion on December 8, 1999: US government agencies had conspired successfully to kill Dr. King.

Mainstream media carried little about this trial and verdict in 1999 and they persist in ignoring it to this day. When challenged they tend to say that the claims were muddy and confused and vulnerable to easy refutation. Actually, the plaintiffs’ case was strong, and the jury, after sitting and listening to presentation of evidence and argument from November 15 to December 8, was quickly able to reach consensus on the verdict. The great variety of evidence presented by attorney William Pepper pointed to the impossibility of the lone assassin hypothesis (James Earl Ray) and to the conspiring of several bodies, including the local police (Memphis Police Department), the mafia (local representative Frank Liberto), and federal police, intelligence and military units. In other words, the combination of forces that carried out the murder was not very different from that which had killed President Kennedy. Such was the planning, the commitment, and the determination of the assassins that there was little chance Dr. King could have survived the day. He was led like a lamb to the slaughter onto the balcony of the Lorraine Motel.

Reading the transcript of this trial takes some time (it’s about 2700 pages long), but having done so I am impressed by attorney Pepper’s persistence and skill in getting to the heart of this matter. Yet if the findings are to have political force, and if the mainstream media persist in pretending the trial never took place, it falls to active citizens to do their part to make the trial and the findings known. They should tell people about this trial, encourage people to read it, quote from it, and emphasize its importance. They should not let it be trivialized (as the current Wikipedia article on Martin King tries to do) by pretending the claims of government conspiracy were weak and have been refuted—they have not.

King was killed not just because he was a civil rights activist, but because he was planning the Poor People’s Campaign, which would have involved nonviolent disruption of business as usual in Washington on behalf of all of the nation’s poor, whatever their colour. This made the 1% uncomfortable. King was also killed because he had passionately criticized his country’s pursuance of the Vietnam War—his major denunciation of that war at Riverside Church in New York City had taken place one year to the day before he was killed. The eloquent and uncompromising talk had made everyone from President Johnson to the U.S. military and intelligence communities uncomfortable.

Far from being confused and muddy, I think the central arguments presented in 1999 have been quite well established. Moreover, there was little sophistication in the attempts to buy off and threaten James Earl Ray, to discourage and even kill eyewitnesses, and to pretend against all evidence that government investigations had been thorough and had found nothing to seriously question the case against Ray.

The truth is that the lone gunman theory bit the dust in 1999, and anyone who attempts to resurrect it had better be able to challenge chapter and verse of this civil trial.

For those who have not read the trial transcript, I shall end with an exemplifying segment—worth quoting to friends who might be unfamiliar with it.

This material is taken directly, with only minor omissions, from the court transcript of testimony given in mid-afternoon, November 30th, 1999.

A former Memphis Yellow Cab driver, Louis Ward, is on the stand answering questions put to him by attorney William Pepper. Ward describes what a fellow cab driver, Paul Butler, saw and reported as an eyewitness to the assassination and its aftermath. Why Butler himself was not on the stand will eventually become clear.

Some of these details were reported by Butler via car radio right after the assassination, while Ward heard other details face-to-face from Butler a bit later in the day.

“…as I raised up and looked, that rifle  popped — it didn’t sound like a rifle, it sounded like two boards clapped together. And he said, I seen his jaw and part of his neck blowed away. It was like he had a stick of dynamite in his mouth. He said, as I wheeled and looked, I seen a cluster of smoke coming up out of the bushes, and then I seen the guy come running up. He didn’t have no rifle. But he said, I know that he is the one that had to shoot him. And then he headed towards the — headed north towards  the squad car. And, of course, we thought the police had picked him up. Because it was a  black and white squad car…

Q. So he’s telling you that after the  shot he saw a man come out of the bushes –

Q. Which was parked where?

A. He said about a half a block north of the motel.

Q. And then what happened to that car?

Q. I see. So both you and Mr. Butler had thought that the police had apprehended the shooter.

Q. What happened next? Did any police come out to the airport?

A. Yes. While I’m standing there talking, a squad car drove up with a lieutenant and a patrolman…And the lieutenant wrote the report down that he [Butler] had and told him that they would be back in contact with him. So they got in the squad car and left after they got the report.

Q. So they took a report from Mr. Butler and they — they left. Where were you standing when that report was being taken?

Q. You overheard this report being given?

Q. All right. Then what happened next?

A. Well, they called — the dispatcher called him to come in to the headquarters. We have a headquarters. Said he was wanted down there. Well, later on that night, not too much later, I was in town and drove by the cab company and there was several squad cars down there. And I figured that they were, you know, taking some more reports. And then I found out later that he was supposed to be at court at 9 o’clock the next morning.

Q. He was supposed to give a statement –

Q. — the next morning? And how many squad cars were around Yellow’s offices that night?

[Two weeks then pass before Ward goes back to Yellow’s headquarters, when the following takes place.]

Q. When was the next time you actually went into the offices and –

A. Oh, it was — well, I went into the office when I first came back to work. I went in then. That’s when I — I asked him about Mr. Butler.

Q. Who did you ask about Mr. Butler?

A. There was four or five cab drivers standing around talking. And I just asked them. And that’s when they told me — I don’t even remember which one told me. But he said he had been throwed out of a high- speed automobile between Memphis and West Memphis. And they found him about 10 o’clock the next day. [April 5, 1968]

A. The next — the next morning. They said they found his body about 10 o’clock or 10:30 the next morning. He was supposed to have been in court at 9 o’clock that morning  and he wasn’t there. They found his car there at the cab company. And — but he wasn’t — he wasn’t — never made it to court. But then about 10:30 they said they found his body between Memphis and West Memphis.

And so it is that Martin Luther King, Jr. Day, finding its way into the nation’s calendar of saints and heroes, has the potential to shake this calendar of myths and fibs into pieces.

Prof. Graeme MacQueen is co-editor of the Journal of 9/11 Studies and co-author, with Johan Galtung, of Globalizing God-Religion, Spirituality and Peace, TRANSCEND University Press, 2008. MacQueen was founding director of the Centre for Peace Studies at the McMaster University in Hamilton, Ontario, where he taught for 30 years. He holds a Ph.D. in Buddhist Studies from Harvard University and is a member of the TRANSCEND Network for Peace Development Environment. MacQueen was an organizer of the Toronto Hearings on 9/11, is a member of the Consensus 9/11 Panel, and is a former co-editor of the Journal of 9/11 Studies.

Anticopyright: Editorials and articles originated on TMS may be freely reprinted, disseminated, translated and used as background material, provided an acknowledgement and link to the source, TMS: Martin Luther King: The Saint Honored by the Government That Shot Him in the Face … A “Forgotten” Extrajudicial Political Assassination [?], is included. Thank you.

One Response to “Martin Luther King: The Saint Honored by the Government That Shot Him in the Face … A “Forgotten” Extrajudicial Political Assassination [?]”