Who to Believe about Venezuela’s Election?

11 Jan 2021 – In early December I traveled to Venezuela to be an election observer at their national assembly election. I was part of a group of eight persons from Canada and US organized by CodePink. There were about two hundred international observers in total, including the  Latin American Council of Electoral Experts.  I have previously been an official election observer in Honduras and was an unofficial observer at the 2015 Venezuela national assembly election.

Before the election, our small group met eight leaders of the Democratic Alliance. This is the major opposition coalition. Pedro Jose Rojas of Accion Democratica said the US sanctions are not doing what is claimed; they are hurting average citizens. Bruno Gallo of Avanca Progressista said Venezuela needs negotiation not confrontation. Juan Carlos Alvarado of the Christian Democratic Party said Venezuelans have been “victims of politics” and that dialogue and flexibility are needed. Several leaders spoke about the importance of the national assembly and the road to change is through voting not violence. Several leaders expressed the wish for better relations with the US; another one said Venezuelan sovereignty needs to be respected.  The common request was to end US sanctions and interference in Venezuelan politics.

We visited the factory where voting machines were assembled, tested and certified. The staff was openly proud of their work. In March this year, nearly all the pre-existing voting computers were destroyed in a massive fire at the main election warehouse. There were calls to delay the December election. But in six months, forty thousand new computers were ordered, built, assembled, tested and certified for the December election. 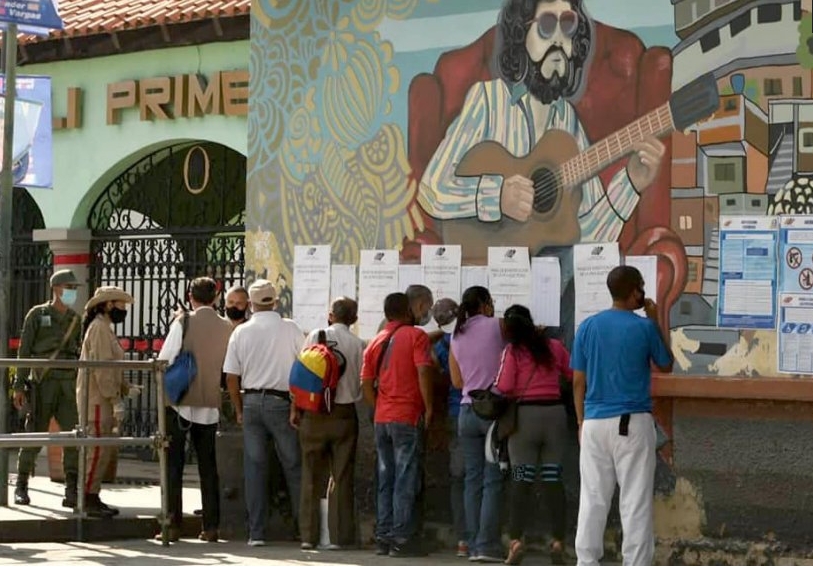 On election day, Sunday December 6, we visited many different elections sites. Typically, the election voting takes place at a school, with five or ten classrooms designated as “mesas”.  Each voter goes to his or her designated classroom / “mesa”.

The voting process was quick and efficient, with bio-safety sanitation at each step. The first step is to show your identity card and prove your identity with fingerprint recognition. Step 2 was to make your voting choices at the touchscreen computer and receive a paper receipt. Step 3 is to verify the receipt matches your voting choice and deposit the receipt in a ballot box. The fourth and final step is to sign and put your fingerprint on the voting registry.  The entire voting process took about 3 minutes.

At the end of the voting day, we observed the process of tabulating the votes. At each “mesa”, with observers from other parties present,  the paper receipts were recorded one by one. At the end, the results were compared to the digital count.  Voting results were then transmitted to the headquarters for overall tabulation.

Election results were announced by the Council for National Election (CNE) which manages the entire process.  CNE leaders are not permitted to be members of any party and the CNE leadership was recently changed at the request of the opposition.  In our discussion with leading opposition members, they complained about incumbent party advantages but acknowledged the election process is free, fair and honest. 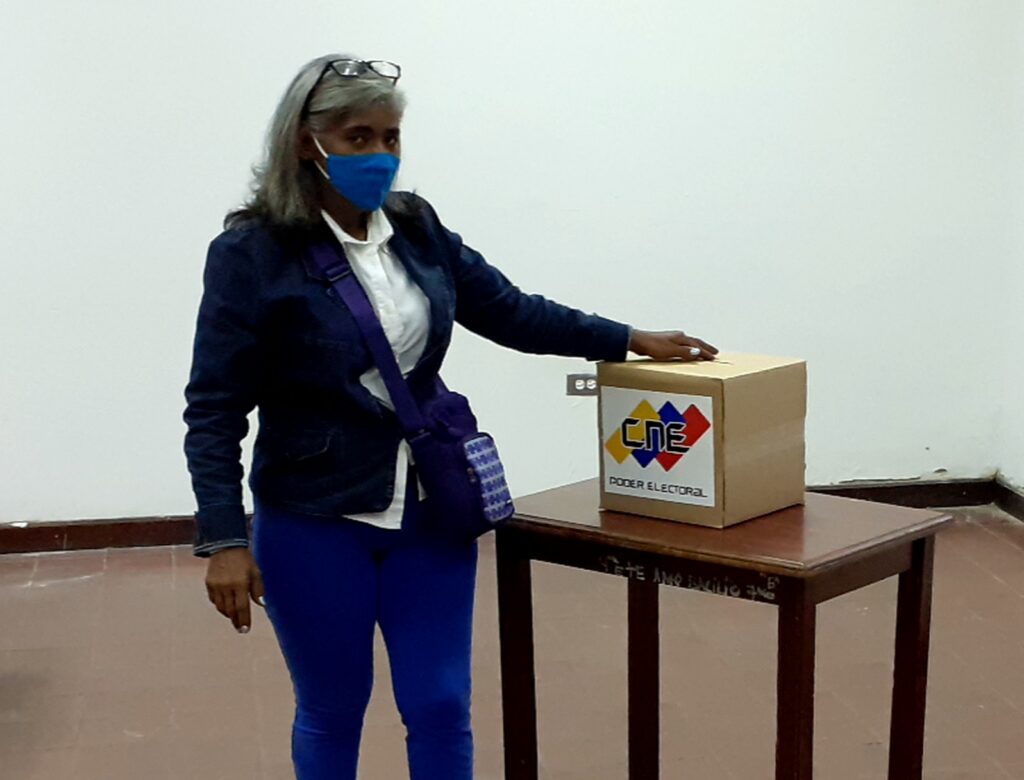 With this firsthand experience, on December 29 I watched a PBS Newshour segment  about the Venezuela election and overall situation.   PBS reporter Marcia Biggs said, “Maduro’s party essentially ran unopposed in this month’s election.”   As noted above, this is untrue.

In fact, there were 107 parties and over 14,000 individuals competing in the December 6 election for 277 national assembly seats. While 8 parties were in alliance with the governing United Socialist Party of Venezuela (PSUV), there were over 90 opposition parties. The strongest opposition coalition was the Democratic Alliance comprising 7 opposition parties.  The Democratic Alliance won 1.1 million votes or 18% of the vote. The LEFT opposition to the PSUV, under the banner of the Communist Party of Venezuela, received 168 thousand votes.

Reporter Marcia Biggs claimed that “politics permeates everything in Venezuela and can determine whether you support Maduro and eat or go hungry.” This claim is based on a campaign statement by PSUV Vice President Diosdado Cabello encouraging people to vote. He jokingly said that women are in the forefront and can say to their family, “No vote, no food.” Video of him making the statement is here.  This statement has been distorted out of all meaning and context.

The PBS story showed a fistfight in the national assembly, implying that it was the Venezuelan government.  But, as reported in the “Juan Guaidó surreal regime change reality show”,  the fight was between competing factions of the Venezuelan opposition.

When they showed Juan Guaidó climbing over a fence, that was a publicity stunt to distract from the important news that Luis Parra was elected Speaker of the national assembly one year ago.  That was embarrassing because Guaidó’s claim to be “interim president” was based on his being Speaker.

Election turnout was lower than usual at 31% but one needs to account for the election taking place despite covid19 with no mail-in voting. Also, millions of registered voters have had to leave the country due to economic hardship. Also, transportation is difficult due to gasoline scarcity. This was a national assembly election, equivalent to a US mid-term election, which gets lower turnout. Note that 95% of voting eligible Venezuelans are registered voters compared to just 67% in the USA.  Thus a turnout of 50% registered voters in the US equates to 33% of eligible voters. 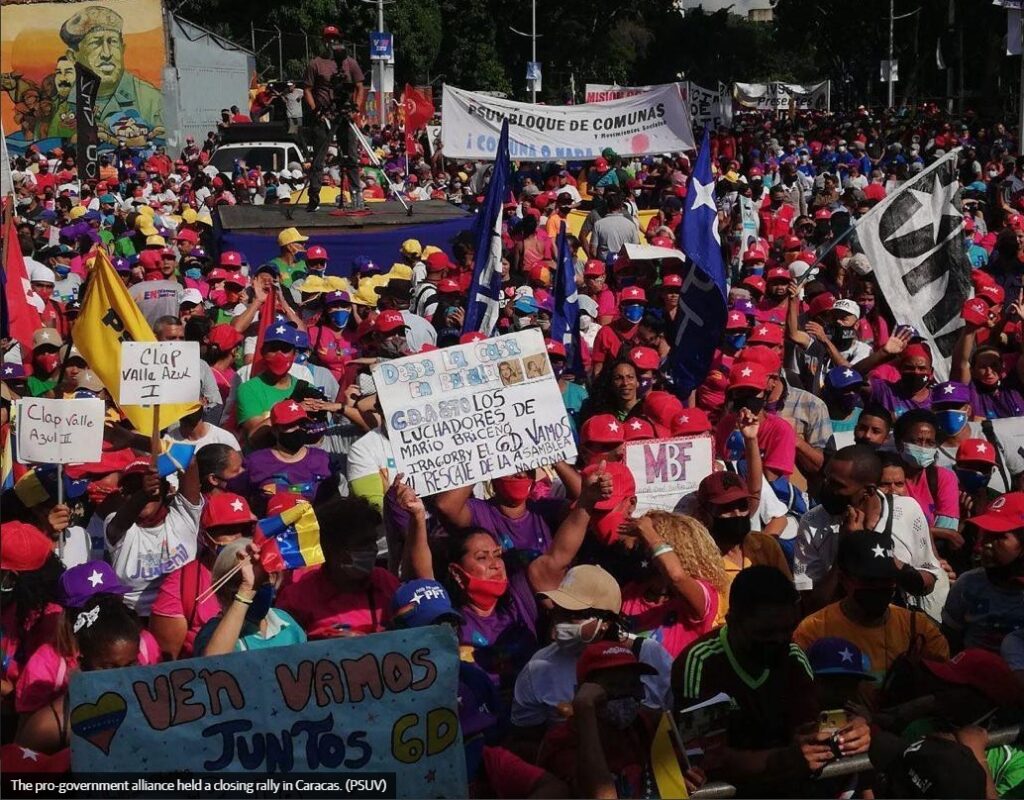 US Meddling in Venezuela

The star of the 7-minute PBS story is Roberto Patino, the Venezuelan director of a food distribution charity. The report neglects to mention that Patino is associated with a major US foreign policy institution. He is a Millennium Leadership fellow and “expert” at the neoliberal Atlantic Council where the “regime change” goals against Venezuela are  clear.  His food charity “Alimenta la Solidaridad” is allied with the “Rescue Venezuela” funded by the US with the apparent goal of undermining the Venezuelan government and promoting “interim president Juan Guaidó”.

Roberto Patino says the Venezuelan government is “very paranoid and they see conspiracies all over.” Paranoia is a mental condition where there is fear of imaginary threats.  But US threats and aggression against Venezuela are not imaginary; they are very real:

In 2002 the US supported the kidnapping and coup against the popular and elected President Hugo Chavez. The years have gone by but US hostility persists.

Based on the past twenty years, Venezuela’s government has good reason to be on guard against US threats, meddling and intervention. The PBS program ignores this history.

Another hero of the show is the exiled politician Leopoldo Lopez. He was imprisoned in 2014 for instigating street violence known as “guarimbas” which led to the deaths of 43 people.

Like Patino, Lopez  is from the Venezuelan elite, studied in the US and has major public relations support in the US. Like Guaidó, Leopoldo Lopez is more popular in Washington than his home country.

Will the US respect Venezuelan sovereignty?

If the PBS Newshour reporters had not been so biased, they would have interviewed members of the moderate opposition in Venezuela. Viewers could have heard Democratic Alliance leaders explain why they participated in the election, why they are critical of US economic sanctions and US interference in their domestic affairs. That would have been educational for viewers.

But viewers of the PBS special did not learn this. Instead, they received a biased report ignoring the moderate opposition and promoting a few US supported elites.  The report ignores or denigrates the efforts of millions of Venezuelans who carried out and participated in an election which compares favorably with the election process in the US.  You would never know it from PBS, and you might not believe it, unless you saw it with your own eyes.

Anticopyright: Editorials and articles originated on TMS may be freely reprinted, disseminated, translated and used as background material, provided an acknowledgement and link to the source, TMS: Who to Believe about Venezuela’s Election?, is included. Thank you.