Afghanistan 2022: Peace without Reconciliation Will Be a Salvaging Operation for Biden

19 Apr2021 – What can President Biden’s team and his Secretary of State Antony Blinken salvage from the promised withdrawal of U.S. troops from Afghanistan? American dreams of ‘democracy’ produced the Afghan nightmare President Biden wants to terminate in September 2021. Can he replace the nightmare with something that resembles peace, based on realism?

As Max Fisher points out in his April 16th article in the New York Times, “The Contradiction That Doomed America’s Mission in Afghanistan,” involved two critical decisions taken in mid-December 2001: the failure to seek reconciliation, which is essential for peace; and the decision to create a centralized republican, democratic State, which Afghanistan had never been.

Afghans have no culture of democracy. Discussion and compromise sometimes, but one-man-one-vote is unknown in Afghan history. Afghan strong men take decisions, and Afghan women stay at home. That is how Afghan society works.

Afghans are defensive, and proud.

Afghans have only ever known conquest and Kings.

The historical ‘Father of Afghanistan’ was Ahmad Shah Durrani, who seized the throne of Afghanistan in 1747.  He took power from the Ghilzai Pashtuns (Mir Wais Hotak) of Kandahar and installed the Durrani Pashtun dynasty. 1747 seems a long time ago to Americans: George Washington was just 15 years old…. But for Afghans, 1747 is just the day before yesterday. 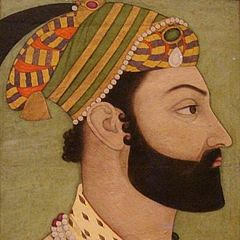 The Durrani Pashtuns held power – with plenty of ups and downs, including three Anglo-Afghan wars where British won battles but Afghans always won the war – until 1973. The Communist-inspired coup that removed King Zahir Shah, ushered in decades of war, repression and ten years of Russian occupation and bombings. After the Red Army withdrew in 1989, the Afghans kept fighting. By 1994, Pakistan had helped the Taliban to win power. Their leader was one-eyed Mullah Omar from Kandahar, a Ghilzai Pashtun. After 250 years, the Ghilzais were back in power. There was no peaceful reconciliation: brute power is what Afghans have always experienced.

The 2001 attacks known as 9/11 were organized and executed by Saudi Arabian terrorists. Not a single Afghan was involved. Osama Bin Laden married Mullah Omar’s daughter, but no one has suggested that she flew a plane to New York. When George W. Bush started bombing Afghanistan in October 2001, most Afghans thought the Russians had returned. Few Afghans had ever heard of New York. Recently in the New York Times (15th April 2021), Timothy Kudo, a captain in the U.S. Marines, describes meeting an Afghan Elder who assumed he was a Russian. Kudo is not sure the Elder understood the difference between Russia and America. The title of his article: “I Fought in Afghanistan. I Still Wonder, Was It Worth it?”

On the advice of the naturalized American and oil pipeline negotiator Zalmay Khalilzad (a Noorzai Pashtun), George Bush put his trust in Hamid Karzai, head of the Durrani Popalzai Pashtuns. Bush and Co naïvely believed democracy to be a universal ideal. He proved (in Afghanistan, Iraq and Syria) that democracy does not work when tribal loyalty comes first.

A realistic assessment of Afghan options in December 2001 was the following:

Karzai chose the first option. In December 2001 at the shrine of Sher-i-Surkh outside Kandahar, Karzai was crowned with wheat by the leaders of various Afghan Pashtun tribes, re-enacting the 1747 coronation of Ahmed Shah Durrani. Karzai even included a descendant of the religious leader Sabir Shah who had crowned King Ahmad Shah with ears of wheat, symbolizing his rule over the land. Karzai saw himself as a Durrani monarch. Americans did not have the imagination to understand this was their best option. The reconciliation of conflicted Afghan political parties under an acceptable Pashtun King, a recognized successor to Ahmad Shah Durrani, was not part of the American agenda. As Max Fisher explains, the Bush framing of war as ‘Good versus Evil’ excluded negotiation with the Taliban. Instead, Bush created a ‘forever war’ against an idea: the ‘global war on terror.’ 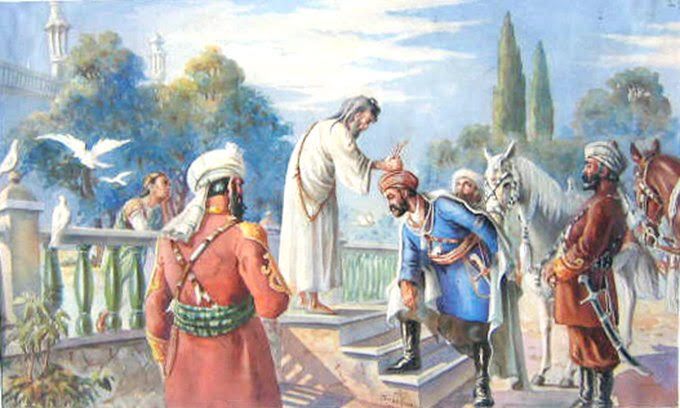 The conqueror Ahmad Shah Durrani is crowned in Kandahar in 1747 with a sheaf of wheat.

Elections Have Undermined the Role of Afghanistan’s Presidents

The concept of elections is foreign to Afghan perceptions of power. When Hamid Karzai was selected by the Americans in 2001, he was a credible political figure, an international personality with good English, educated in India. He had succeeded his father as head of the Popolzai Durrani Pashtun tribe after the assassination of his father in Quetta, N.W. Pakistan, by the Taliban. But as an Afghan observed to me with a smile: “How can Karzai expect to rule Afghanistan? He has been chosen by foreigners; and he has never killed anybody.”

Afghans expect strong leaders. In Afghan eyes, every successive ‘election’ reduced the stature of Hamid Karzai, proved he was an American puppet and diminished Karzai’s authority. Americans saw elections as legitimizing President Karzai; Afghans saw each election as confirmation that Karzai was a foreign puppet. America’s policies reduced Karzai from ‘king’ to ‘president’ …. to a  powerless figurehead …. to mockery as ‘mayor of Kabul’.

Americans know not what they do!

The ‘election’ of Afghan president Ashraf Ghani, an economist from Columbia University, with a turnout of 18% was shamocracy, but not democracy.  What legitimacy is conferred by a turnout of 18%? What rural Afghan would ever vote for an American economist, a foreign puppet? And rural Afghan women simply do not vote. The U.S. have ensured that Ashraf Ghani is irrelevant.

Afghanistan Is a Buffer State Not a Nation

Afghanistan is not even a country, far less a nation. Afghanistan is a buffer state conquered by Pashtuns, favored by the 19th century Russian and British Empires to prevent them from having a common frontier. North of the Hindu Kush mountains, an aggressive minority of mainly Ghilzai Pashtuns exiled from Kandahar by the Durrani, dominate the Uzbek, Turkmen and Tajik farmers who always hated Pashtuns. On the Western frontier live Persian-speaking Tajik and Aimaq farmers, paying taxes to the Durrani. In the mountainous center of Afghanistan live Hazara Mongols descended from the hordes of Genghis Khan and Tamberlane (Timur Lang): feared by all Sunni Muslim Afghans because their ancestors destroyed great Muslim civilizations back in the 1200s, the Hazara are despised as Shia Muslims and distrusted as allies of Iran. Southern Afghanistan is filled with Pashtun tribes permanently on the edge of war: to the extent that a boy receives his first knife at age 7, and his first rifle at age 12 with which he is expected to shoot his hereditary enemies in the neighboring Pashtun tribe.

My Afghan caricature comes close to the truth. Crowned King in Kandahar, the Americans failed to crown Karzai in Kabul. Instead, America chose option 3, and they have been trying to create a democratic colony for the past 20 years. They were doomed to fail.

Dismemberment (option 4) remains a long-term possibility. In the short term, only No 2 seems possible: the Ghilzai Mullahs of the Taliban will return to power. They came to power in 1994 thanks to Pakistan, where their rear bases are still protected by the ISI, the semi-independent Inter-Service Intelligence of the Pakistani army.  How independent of Pakistan can the Taliban ever be?

Zalmay Khalilzad, the Noorzai Pashtun who has run America’s Afghan policy since the 1990s, remains President Biden’s Special Representative for Afghan Reconciliation. He knows he must negotiate the removal of president Ashraf Ghani (send him back to Columbia University), and he needs to be able to offer a generous package of U.S. assistance conditional upon things like ‘no terrorist plots’ and ‘please integrate existing police and soldiers, instead of killing them’ and ‘please allow girls to stay in school.’  Pakistan will be the guarantor of the agreement … or not. That is about as much as the President Biden’s administration can expect to salvage from George W. Bush’s Fourth Anglo- Afghan (American) War. 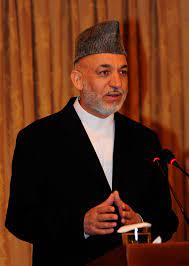 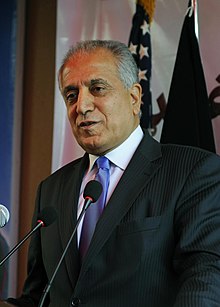 What most Afghans want, is peace. Peace may include education for women – at least for urban women. Peace may include the integration of police and military units. Peace may include open borders to encourage trade, or closed borders to reduce smuggling. Opium production? Forget it!  During the past 20 years, America never invested in alternative cash crops for Afghan farmers, who must therefore feed their children by continuing to grow and export opium. Economic development was always neglected in favour of U.S. military expenditures, and bad policies produce poor outcomes.

To get the best deal possible and transform NATO’s military withdrawal into a peaceful Afghanistan, President Biden, Secretary of State Blinken and Ambassador Khalilzad will need to persuade Russia and Pakistan to give practical support to their withdrawal agreement, while obtaining the tacit agreement (or neutrality) of China, India and Iran. President Ashraf Ghani is a nice fellow, but he is not part of the solution. 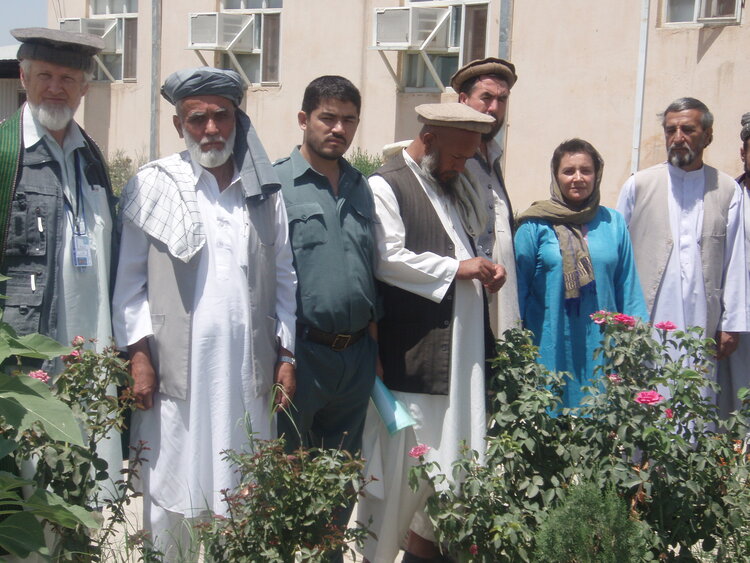 The author (left) and his U.N. colleague Mme Chimène Mandakovic meeting a group of Mujaheddin Kommandars during a 2007 mission in Afghanistan, to evaluate the UN’s rather successful disarmament programme that allowed the creation of a new army.

Robin Poulton is a member of the TRANSCEND Network who has been working in West African peace and development since 1980. A researcher with UNIDIR Geneva (United Nations Institute for Disarmament Research), School of World Studies at Virginia Commonwealth University, West Africa Research Association and elsewhere, he is author most recently of Peace Is Possible about peace building and disarmament in Cambodia with the Khmer Rouge. Website:  https://robinpoulton.com/. Email: repoulton@epesmandala.com

Anticopyright: Editorials and articles originated on TMS may be freely reprinted, disseminated, translated and used as background material, provided an acknowledgement and link to the source, TMS: Afghanistan 2022: Peace without Reconciliation Will Be a Salvaging Operation for Biden, is included. Thank you.

One Response to “Afghanistan 2022: Peace without Reconciliation Will Be a Salvaging Operation for Biden”