Gates Unhinged: Dystopian Vision for Agrifood Must Not Succeed

18 Apr 2021 – We are currently seeing an acceleration of the corporate consolidation of the entire global agrifood chain. The high-tech/data conglomerates, including Amazon, Microsoft, Facebook and Google, have joined traditional agribusiness giants, such as Corteva, Bayer, Cargill and Syngenta, in a quest to impose a certain type of agriculture and food production on the world.

The Bill and Melinda Gates Foundation is also involved (documented in the recent report ‘Gates to a Global Empire‘ by Navdanya International), whether through buying up huge tracts of farmland, promoting a much-heralded (but failed) ‘green revolution’ for Africa, pushing biosynthetic food and new genetic engineering technologies or more generally facilitating the aims of the mega agrifood corporations.

Of course, those involved in this portray what they are doing as some kind of humanitarian endeavour – saving the planet with ‘climate-friendly solutions’, helping farmers or feeding the world. This is how many of them probably do genuinely regard their role inside their corporate echo chamber. But what they are really doing is repackaging the dispossessive strategies of imperialism as ‘feeding the world’. 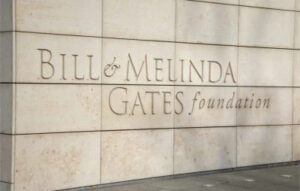 Since the Green Revolution, US agribusiness and financial institutions like the World Bank and the International Monetary Fund have sought to hook farmers and nation states on corporate seeds and proprietary inputs as well as loans to construct the type of agri infrastructure that chemical-intensive farming requires.

Monsanto-Bayer and other agribusiness concerns have since the 1990s been attempting to further consolidate their grip on global agriculture and farmers’ corporate dependency with the rollout of genetically engineered seeds, commonly known as GMOs (genetically modified organisms).

In her latest report, ‘Reclaim the Seed’, Vandana Shiva says:

“In the 1980s, the chemical corporations started to look at genetic engineering and patenting of seed as new sources of super profits. They took farmers varieties from the public gene banks, tinkered with the seed through conventional breeding or genetic engineering, and took patents.”

Shiva talks about the Green Revolution and seed colonialism and the pirating of farmers seeds and knowledge. She says that 768,576 accessions of seeds were taken from farmers in Mexico alone:

“… taking the farmers seeds that embodies their creativity and knowledge of breeding. The ‘civilising mission’ of Seed Colonisation is the declaration that farmers are ‘primitive’ and the varieties they have bred are ‘primitive’, ‘inferior’, ‘low yielding’ and have to be ‘substituted’ and ‘replaced’ with superior seeds from a superior race of breeders, so called ‘modern varieties’ and ‘improved varieties’ bred for chemicals.”

It is now clear that the Green Revolution has been a failure in terms of its devastating environmental impacts, the undermining of highly productive traditional low-input agriculture and its sound ecological footing, the displacement of rural populations and the adverse impacts on village communities, nutrition, health and regional food security.

These are just a brief selection of peer reviewed and ‘grey’ literature which detail the adverse impacts of the Green Revolution.

As for GM crops, often described as Green Revolution 2.0, these too have failed to deliver on the promises made and, like the 1.0 version, have often had devastating consequences.

The arguments for and against GMOs are well documented, but one paper worth noting appeared in the journal Current Science in 2018. Along with PC Kesavan, MS Swaminathan – regarded as the father of the Green Revolution in India – argued against introducing GM crops to India and cited various studies about the failings of the GMO project.

Regardless, the industry and its well-funded lobbyists and bought career scientists continue to spin the line that GM crops are a marvellous success and that the world needs even more of them to avoid a global food shortage. GM crops are required to feed the world is a well-worn industry slogan trotted out at every available opportunity. Just like the claim of GM crops being a tremendous success, this too is based on a myth.

There is no global shortage of food. Even under any plausible future population scenario, there will be no shortage as evidenced by scientist Dr Jonathan Latham in his recent paper ‘The Myth of a Food Crisis’.

However, new gene drive and gene editing techniques have now been developed and the industry is seeking the unregulated commercial release of products that are based on these methods.

It does not want plants, animals and micro-organisms created with gene-editing to be subject to safety checks, monitoring or consumer labelling. This is concerning given the real dangers that these techniques pose.

Many peer-reviewed research papers now call into question industry claims about the ‘precision’, safety and benefits of gene-edited organisms and can be accessed on the GMWatch.org website.

It really is a case of old wine in new bottles.

And this is not lost on a coalition of 162 civil society, farmers and business organisations which has called on Vice-President of the European Commission Frans Timmermans to ensure that new genetic engineering techniques continue to be regulated in accordance with existing EU GMO standards.

The coalition argues that these new techniques can cause a range of unwanted genetic modifications that can result in the production of novel toxins or allergens or in the transfer of antibiotic resistance genes. The open letter adds that even intended modifications can result in traits which could raise food safety, environmental or animal welfare concerns.

The European Court of Justice ruled in 2018 that organisms obtained with new genetic modification techniques must be regulated under the EU’s existing GMO laws. However, there has been intense lobbying from the agriculture biotech industry to weaken the legislation, aided by the Gates Foundation.

The coalition states that various scientific publications show that new techniques of genetic modification allow developers to make significant genetic changes, which can be very different from those that happen in nature.

In addition to these concerns, a new paper from Chinese scientists, ‘Herbicide Resistance: Another Hot Agronomic Trait for Plant Genome Editing’, says that, in spite of claims from GMO promoters that gene editing will be climate-friendly and reduce pesticide use, what we can expect is just more of the same – GM herbicide-tolerant crops and increased herbicide use.

The industry wants its new techniques to be unregulated, thereby making gene-edited GMOs faster to develop, more profitable and hidden from consumers when purchasing items in stores. At the same time, the costly herbicide treadmill will be reinforced for farmers.

None of this is meant to imply that new technology is bad in itself. The issue is who owns and controls the technology and what are the underlying intentions. By dodging regulation as well as avoiding economic, social, environmental and health impact assessments, it is clear that the industry is first and foremost motivated by value capture and profit and contempt for democratic accountability.

This is patently clear if we look at the rollout of Bt cotton in India which served the bottom line of Monsanto but brought dependency, distress and no durable agronomic benefits for many of India’s small and marginal farmers. Prof A P Gutierrez argues that Bt cotton has effectively placed these farmers in a corporate noose.

Monsanto sucked hundreds of millions of dollars in profit from these cotton farmers, while industry-funded scientists are always keen to push the mantra that rolling out Bt cotton in India uplifted their conditions.

Those who promote this narrative remain wilfully ignorant of the challenges (documented in the 2019 book by Andrew Flachs – ‘Cultivating Knowledge: Biotechnology, Sustainability and the Human Cost of Cotton Capitalism in India‘) these farmers face in terms of financial distress, increasing pest resistance, dependency on unregulated seed markets, the eradication of environmental learning,  the loss of control over their productive means and the biotech-chemical treadmill they are trapped on (this last point is precisely what the industry intended).

When assessing the possible impacts of GMO agriculture, it was with good reason that, in their 2018 paper, Swaminathan and Kesavan called for:

“able economists who are familiar with and will prioritise rural livelihoods and the interests of resource-poor small and marginal farmers rather than serve corporate interests and their profits”.

Whether through all aspects of data control (soil quality, consumer preferences, weather, etc), e-commerce monopolies, corporate land ownership, seed biopiracy and patenting, synthetic food or the eradication of the public sector’s role in ensuring food security and national food sovereignty (as we could see in India with new farm legislation), Bill Gates and his corporate cronies seek to gain full control over the global food system.

We could see farmerless industrial-scale farms being manned by driverless machines, monitored by drones and doused with chemicals to produce commodity crops from patented GM seeds for industrial ‘biomatter’ to be processed and constituted into something resembling food.

The displacement of a food-producing peasantry (and the subsequent destruction of rural communities and local food security) was something the Gates Foundation once called for and cynically termed “land mobility”.

Technocratic meddling has already destroyed or undermined agrarian ecosystems that draw on centuries of traditional knowledge and are increasingly recognised as valid approaches to secure food security, as outlined in Food Security and Traditional Knowledge in India in the Journal of South Asian Studies, for instance.

But is all of this inevitable?

Not according to the International Panel of Experts on Sustainable Food Systems, which has just released a report in collaboration with the ETC Group: ‘A Long Food Movement: Transforming Food Systems by 2045‘.

The report outlines two different futures. If Gates and the global mega-corporations have their way, we will see the entire food system being controlled by data platforms, private equity firms and e-commerce giants, putting the food security (and livelihoods) of billions at the mercy of AI-controlled farming systems.

The report’s lead author, Pat Mooney, says that agribusiness has a very simple message: the cascading environmental crisis can be resolved by powerful new genomic and information technologies that can only be developed if governments unleash the entrepreneurial genius, deep pockets and risk-taking spirit of the most powerful corporations.

Mooney notes that we have had similar messages based on emerging technology for decades but the technologies either did not show up or fell flat and the only thing that grew were the corporations.

“In return for trillions of dollars in direct and indirect subsidies, the agribusiness model would centralise food production around a handful of untested technologies that would lead to the forced exodus of at least a billion people from hundreds of millions of farms. Agribusiness is gambling on other people’s food security.”

Although Mooney argues that new genuinely successful alternatives like agroecology are frequently suppressed by the industries they imperil, he states that civil society has a remarkable track record in fighting back, not least in developing healthy and equitable agroecological production systems, building short (community-based) supply chains and restructuring and democratising governance systems.

As stated in the report, the thrust of any ’Long Food Movement’ strategy is that short-termism is not an option: civil society groups need to place multiple objectives and actions on a 25-year roadmap and not make trade-offs along the way – especially when faced with the neoliberal-totalitarianism of Gates et al who will seek to derail anything or anyone regarded as a threat to their aims.

The report ‘A Long Food Movement: Transforming Food Systems by 2045’ can be accessed here.

4 Responses to “Gates Unhinged: Dystopian Vision for Agrifood Must Not Succeed”