Are We Human? Are We Free? Defeating the World Economic Forum’s ‘Great Reset’ before It Destroys Us

What most people will probably never know is that 2021 is shaping to be the year in which humanity and freedom are both destroyed.

Not because a virus will kill us, because the virus does not exist. For just two of the myriad demonstrations of this point, see ‘COVID-19: The virus does not exist – it is confirmed!’ and ‘Statement On Virus Isolation (SOVI)’. And for an account of one researcher’s fruitless search over the course of a year to find evidence of an isolated virus, via Freedom of Information requests to 90 health/science institutions all over the world, watch ‘Does the Virus Exist? Has SARS-CoV-2 Been Isolated? Interview with Christine Massey’.

Rather, the injectable being marketed as a ‘vaccine’ will kill a substantial proportion of the human population – for one of the most straightforward explanations of this fact by three highly qualified experts (Professor Dolores Cahill, Dr Judy Mikovits & Dr Sherri Tenpenny) watch ‘The Truth about the Covid-19 Vaccine’ – and turn most others into a human relic, known technically as a ‘transhuman’ or, if you like, ‘cyborg’. See ‘Beware the Transhumanists: How “Being Human” is being Re-engineered by the Elite’s Covid-19 Coup’.

But while the injectable will have devastating consequences on the human population and must be strenuously resisted, it is the hidden and complementary measures being introduced by the criminal global elite under the guise of the World Economic Forum’s ‘Great Reset’ that will ensure the fundamental transformation of life for those humans and transhumans left alive.

If you doubt this, I can only invite you to read what ‘The Great Reset’ portends for humanity. If you want to read a summary, see ‘Killing Democracy Once and for All: The Global Elite’s Coup d’état That Is Destroying Life as We Know It’.

In essence, the net outcome of the many measures that are being implemented, most of them ‘hidden’ behind the worldwide focus on the non-existent virus, will be a substantial human depopulation and enslavement of the rest. For more detail explaining what is already in train and how things will unfold, see the explanation, analysis and many references cited on ‘We Are Human, We Are Free’.

There are many options for resisting what is happening but most that are familiar are doomed to fail. Here, in brief, is why.

If you believe that mass protests will compel governments to respond to movement demands to cease implementing their heinous agenda, it would be useful for you to think a little more deeply about what is taking place. For a start, governments are not driving ‘The Great Reset’; it is an initiative of the global elite and governments are simply elite puppets. Moreover, movements that rely on mass protests only and which are focused too narrowly – such as on resisting lockdown measures, mandatory injection or ‘injection passports’ – cannot impact the elite program overall. To do that, we need a combination of strategically-focused actions that undermine elite power to promote and implement its ‘Great Reset’ agenda which has very many components. And to achieve that outcome, protests are simply the wrong tactic (unless they are specifically used to raise awareness of strategic means of resisting ‘The Great Reset’ and its associated measures in relation to the fourth industrial revolution, eugenics and transhumanism).

If you believe that ‘democratic’ processes will save us, you might be interested to know that these have long been under the control of the global elite and simply provide a convenient mechanism for dissipating the dissent of those who are unaware. For a full explanation of this point, see ‘Killing Democracy Once and for All: The Global Elite’s Coup d’état That Is Destroying Life as We Know It’.

And if you believe that challenges through the legal system will deliver us justice, be aware that these too were long ago captured by the global elite and are used to thwart fundamentally progressive initiatives, whatever occasional victories (invariably on issues that do not concern the global elite) in limited jurisdictions appear to suggest otherwise. In any case, there is no court in the world that has jurisdiction to require the global elite to appear before it to answer for its many outstanding crimes against peace, war crimes and crimes against humanity, nor those crimes it is inflicting now. As discussed by a diverse range of scholars and activists in the 18th , 19th and early 20th centuries, the rule of law is the rule of elite violence. See ‘The Rule of Law: Unjust and Violent’.

Finally, if you believe that violence, in any form, will get us out of this mess, you are giving inadequate consideration to the preeminent geopolitical reality of our time: the military forces at the command of the global elite, starting with the national military forces, including nuclear arsenals, committed to the NATO Alliance. Not to mention the police forces of each jurisdiction. And given the elite agenda includes substantial depopulation, from their viewpoint how this occurs, militarily or otherwise, is really immaterial. So a key strategic consideration is devising the appropriate ways to mobilize military and police forces in support of us.

Given that military and police personnel have far more in common with the communities in which they live than they have in common with the global elite, history offers many examples in which thoughtful nonviolent activists were able to achieve this very effectively. Moreover, while it might be counterintuitive, strategic nonviolent struggle is superior to military violence, as strategic theory explains and history has demonstrated. See The Strategy of Nonviolent Defense: A Gandhian Approach.

In essence then, effective resistance to this elite coup depends on mobilizing enough ‘ordinary’ people to take the strategically-focused nonviolent action – essentially acts of noncooperation to thwart key elite initiatives – that will shift power from the global elite to us. No other option is genuinely realistic or has the sheer power to be as effective.

Hence, as part of the ‘We Are Human, We Are Free’ strategy, earlier this year Anita McKone and I launched ‘The 7 Days Campaign to Resist the Great Reset’, carefully explaining why each of the actions nominated was important in undermining elite power. And recently, Henna Maria in Spain created the beautiful flyers, outlining essential elements of the campaign, displayed with this article.

If you wish to play a vital role in the defence of humanity and human freedom, you are invited to undertake the actions indicated on these flyers, and share them with those who you think might be interested. Provided enough people take these actions on an ongoing basis, the global elite’s capacity to kill or enslave each one of us can be defeated.

What you choose to do, one way or the other, will help shape the fate of humanity. 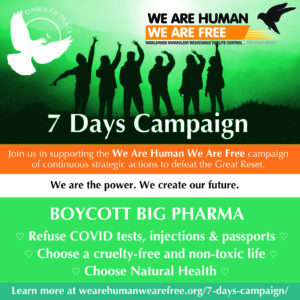 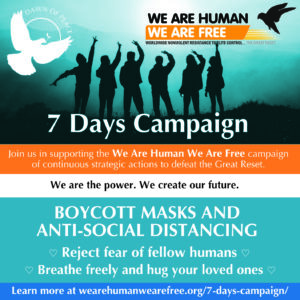 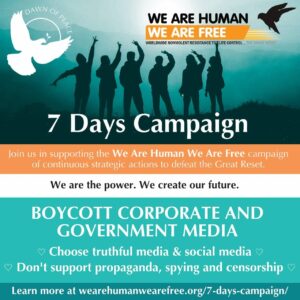 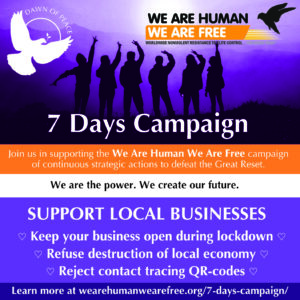 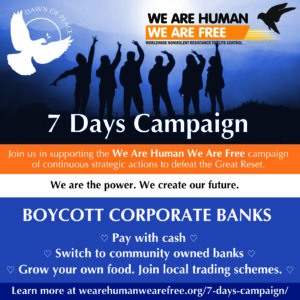 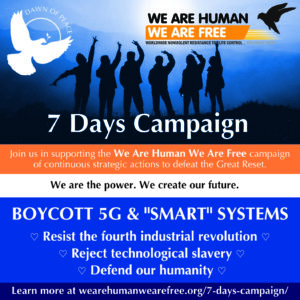 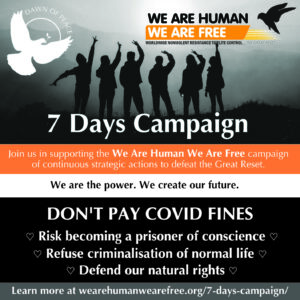 Anticopyright: Editorials and articles originated on TMS may be freely reprinted, disseminated, translated and used as background material, provided an acknowledgement and link to the source, TMS: Are We Human? Are We Free? Defeating the World Economic Forum’s ‘Great Reset’ before It Destroys Us, is included. Thank you.

2 Responses to “Are We Human? Are We Free? Defeating the World Economic Forum’s ‘Great Reset’ before It Destroys Us”