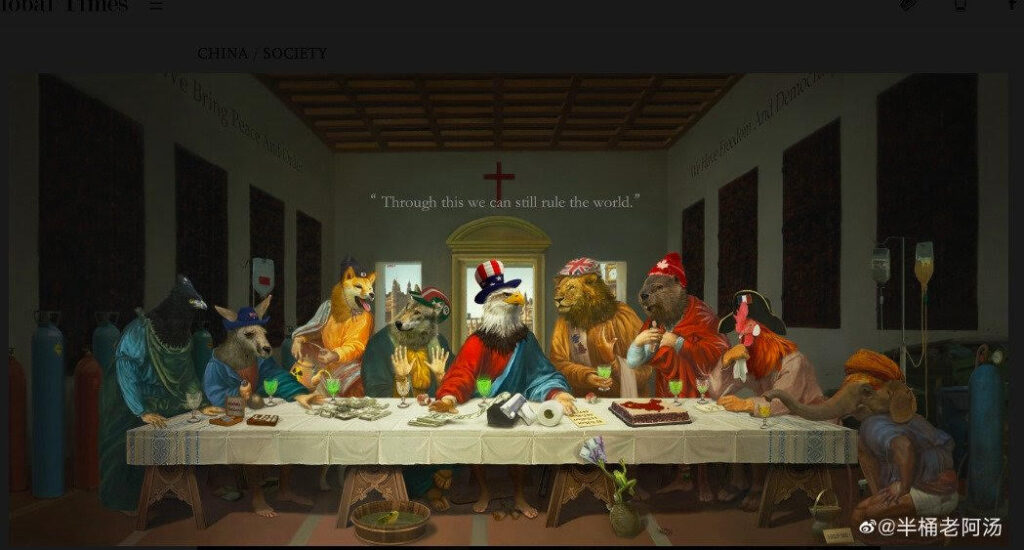 Satirical art piece above by Bantonglaoatang, a Chinese cartoonist, mocking the Group of Seven (G7) members that attempt to suppress China.

Since Russia’s foolish and totally unacceptable war on Ukraine started, there no longer seems to be any limit to what can be said about Russians and Russia and what can be done to isolate the country and its people economically, culturally, socially, financially and in the media. The word ‘Putin’ explains everything as if by magic.

The contempt and hatred must have been latent deep in the collective unconscious for a very long time. It is probably largely a consequence of the so-called free media’s systematic, one-sided “threat assessments” over decades – without comparative analysis with NATO’s behaviour and military overspending – and the omission of any perspective on Russia’s history, security needs or its perception of us.

To explain something has been distorted – by whom? – to be identical with defending. The conversation is dumbing down. The case – the ball – disappears, and all that remains is the persona, categorisation and positioning: “Putin Versteher,” “pro-Russian,” “anti-NATO,” “Putinist,” or “paid by the Kremlin.”

With the classic reservation of a few exceptions, governments, politicians, scientists, and the media are today entirely at the mercy of emotion. Laws can be broken, special regulations imposed, money taken from the world’s poor for Ukrainian refugees; the business world has suddenly become PR-politically correct with Ukraine flags and blue/yellow lights and immediate cessation of all activities in Russia.

The EU overnight has no resource problems with 2-3 million refugees from Ukraine, while in 2015 it could not cope with 1.5 million – mostly Muslims, and this is important – from the war zones the US and other NATO countries have ravaged for decades and many times worse than Russia has done at least until today in Ukraine. Germany decides – again without analysis – to immediately rearm up to US$ 112 billion per year. Russia’s is US$ 66 billion!

In the frenzy of the dog pack, no one will risk appearing cautious, moderate or understanding when it comes to the underlying Russia-NATO conflicts. They denounce the violence – Russia’s but not that of others to nearly the same extent – and overlook entirely the underlying conflicts, which are Russia and NATO and certainly not Russia and Ukraine. Ukraine is only the unfortunate war theatre of war.

More weapons and more rearmament – whatever the cost to our society in the slightly longer term, which no one is analysing – is the only answer needed. We must stand together now, and we do.

But what do we do if it turns out the day after tomorrow to be fundamentally wrong and self-destructive policies?

Cultural events involving Russians are shut down in a row – exhibitions and concerts. The grotesque thing is that these measures also affect Russian artists who have explicitly denounced Russia’s invasion. In other words, they are being punished because they are Russian.

Ministers are urging scientists to stop ongoing research collaborations and not start new ones. Russian goods are removed from shops. Peace and other demonstrations go only to the Russian embassies, not to those of the NATO countries, which – extremely provocatively – have just expanded NATO and let all the wise warnings go to waste. And, as mentioned, waged wars on a scale that dwarfs Russia in comparison.

Facebook sees fit to allow hate speech against Russians – and only them, of course – as long as it’s within the context of the war in Ukraine.

I wonder how far Russians and the rest of us will be forced to suffer under this modern-day parallel to anti-Semitism: Russophobia?

I wonder when this collective psychosis, this mass hysteria with a single focus, will end generations from now?

The Slippery Slope of Lawlessness

There now seems to be an orgiastic heat of self-righteousness. The entire response – every single action in response to Russia’s war on Ukraine – has been decided in such a short time that there has been no time for any kind of impact assessment even 6 months ahead, let alone on a 6 year or 30-year horizon. Not within a national, European or global framework.

The G7 countries are freezing Russia’s US$ 400 billion debt. This is pure theft. They are closing airspaces so that, for example, the Russian foreign minister cannot fly to meetings at the UN in Geneva. The EU/NATO world cuts off oil and gas imports from Russia and imposes countless sanctions on anything and anyone that can move in Russia: “We are coming to get you!” – President Biden said in his State of the Union address.

That’s not how you behave if you feel inferior or fearful of your opponent – the way you argue when you need to raise military spending. And former NATO Secretary-General Anders Fogh Rasmussen tells Danish TV2 that – “Putin will be beaten to a pulp by NATO. Once NATO moves, it will be with enormous force. You have to remember that the investments we make in defence are ten times as big as Putin’s.”

And now the heavily over-armed must over-arm even more?

Thousands of Western companies operating in Russia are now facing possible nationalisation. Will Western governments and/or insurance companies compensate them after leaving? Just think of the cost to German business of this on a 10-20 year horizon – that is, at best, the time it will take until we can hope for a rapprochement with Russia after this.

The boomerangs will come back to us. Be sure of that. And when it happens so severely, the only response from any decision-maker will be: Well, it was and is all Putin’s fault!

But that doesn’t hold water by the West’s own standards.

NATO has provoked Russia with its expansion for 30 years and ignored dozens of warnings about where it was going. When solid, highly experienced American statesmen and intellectuals of a very different calibre than those in the West today – like George F. Kennan, Henry Kissinger, John Mearsheimer, Jack Matlock and William Perry – warned against NATO expansion and attempts to bring Ukraine into NATO, they were simply ignored.

It has broken the promises not to expand NATO an inch, made to Gorbachev in 1989-90. It has set up The Ballistic Missile Defence that deliberately undermines Russia’s ability to respond to a nuclear attack. It has waged war in Yugoslavia, treating both Russia and the UN and international law as inferior.

I am not the only one who predicted years ago that there would be a reaction. Nobody listened. Now Russia has reacted – over-reacted. I agree it is an over-reaction and have argued that Putin could have done other things than this invasion.

Proportionality, Collective Punishment and Violation of Freedom of Expression

Here we are faced with a classic dilemma and responsibility: A may provoke B, but it is still B who chooses his way of reacting and must be held responsible for it.

It is precisely this reasoning about the responsibility of the provoked side for its reaction that must also apply to the response of the NATO/EU countries to Russia’s invasion.

While the West’s response to the invasion is a complete knee-jerk hate policy, it also borders on systematic violation of international law. It is not proportional. It is a deliberate use of collective punishment that the Geneva Conventions and their protocols prohibit. It is all the more so when those who carry it out believe that they are facing a dictator. In a democracy, it might be argued that the people share responsibility for the actions of leaders because they have become leaders through free elections. The situation is quite different in what the same people call dictatorships, where the people cannot be held jointly responsible (I am not saying that Russia is a dictatorship; I am challenging the reasoning of those who think it is).

The closing down of access to Russian media such as RT and Sputnik is a clear violation of The International Covenant on Civil and Political Rights of 1966, Article 19 about the right to seek information freely. And of Article 20 that ”Any propaganda for war shall be prohibited by law” and

”Any advocacy of national, racial or religious hatred that constitutes incitement to discrimination, hostility or violence shall be prohibited by law.”

One must also raise the issue: What kind of suffocating, very hard, broad, unconditional and unlimited sanctions like those the US and EU – not the UN – have decided can possibly be compatible with international law?

Although it is difficult to judge when such things actually happen and should be condemned, the whole public discussion tends to violate at least the spirit of these international law provisions. And it cannot and should not be swept off the table by reference to Russians or others doing the same. We are responsible for our actions.

The West itself tramples on international human rights 24/7 at the moment.

Such fairly obvious ethical-legal dimensions are, of course, completely sidelined. The inner swine dog has frothing at its mouth, and in all its lying self-righteousness can’t get enough. Regardless of decency, the spirit and the letter of international law.

The Boomerangs of Hate – The Self-Destruction of the West

We, our children and grandchildren, will pay dearly for this – the self-isolation and accelerated decline and fall of the West. And perhaps nuclear war – deliberate or by technical and human error.

And it is, one wants us to remember forever, all one person’s fault, Vladimir Putin. And him “we” need neither understand nor take into account. The amateur psychologists and editors are now queuing up in our media to have him diagnosed as almost insane. He went insane on 23 February 2022.

That way this hellishly complex conflict over decades with at least 50 parties can be reduced to issues of one person’s mental health. And it also follows that “we” bear no responsibility whatsoever for the fact that the world is now in the most existentially threatening situation since 1945. We are up against a Russian Hitler – ”Putler” – and now no trick is too small, no lie too big.

So where could this re-action to Russia’s invasion take us? Her a few heuristically chosen possible scenarios, which Western decision-makers have hardly given a thought:

Humanity, as we know, desperately needs constructive cooperation if we shall succeed in solving the problems of inequality, climate and the environment here in the 11th hour, create technological progress and new infrastructure for the good of all, create a new green global economy, reduce militarism and abolish nuclear weapons…etc. All this – all this – will be made impossible by the West’s destructive energy, cold war philosophy, conversion to a kind of war economy, and total lack of positive Realpolitik vision in even a 20-year horizon.

The intellectual laziness, the contempt for ‘the others’ as a kind of Untermenschen, the spine-hatred and the cocktail of self-righteousness are bound to harm the Russian people. But the longer this ‘policy’ is pursued, the more damaging it will become for the West itself. China and the others need not lift a finger, one by one the fruits of history will fall into its basket, and the US system will crumble.

But I know that such reasoning has not one chance in a thousand of being heard in these – fateful – hours and days. Unbearable as it is, I have felt that it should be said as I have done here.

Anticopyright: Editorials and articles originated on TMS may be freely reprinted, disseminated, translated and used as background material, provided an acknowledgement and link to the source, TMS: NATO/Russia Conflict in Ukraine: The West’s Spinal Cord Reaction Will Prove Extremely Self-Destructive, is included. Thank you.