9 May 2022 – For the first time since the end of the ethnic cleanings in 1992-95, the Bosnian human rights activists decided to explore the possibility of establishing international solidarity networks, linking their local activism with those value-based – anti-Fascist and pro-democratic – activists from other parts of the world. 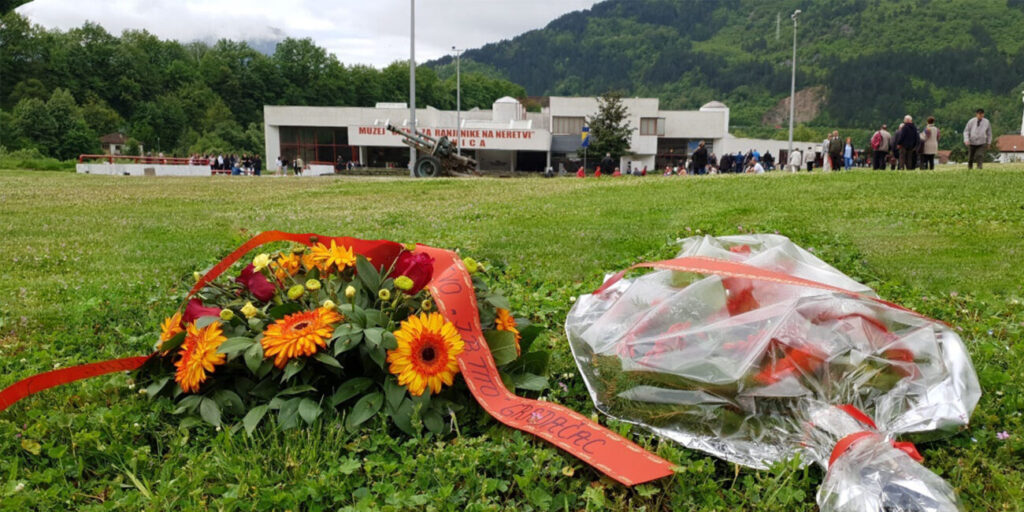 “Are you a fellow human or not?’ Is the only question that really matters.”
Valerija Sjećanje (94), a veteran Yugloslav Partisan fighter, Stolac, Herzegovina

The 9th of May is officially the Europe or Victory Day, commemorating the defeat of Nazi Germany by the Allies  – the Soviet Union, the United States, France and the United Kingdom – in 1945.

Against the backdrop of Russia’s invasion – the crime of aggression, to use the juridical language of the Nuremberg Trials – of Ukraine, the media coverage has speculated how Vladimir Putin might use this year’s Victory Day as his key propaganda platform – to spin how his mission in Ukraine is being accomplished.

But here in the formerly Nazi-occupied Bosnia and Herzegovina the commemoration of the Victory Day keeps alive historical memories of the contributions and sacrifices of Yugoslav Partisans (or “People’s Liberation Movement”) – led by Josip Broz Tito, internationally known as Marshall Tito.

As a founder of the Forces of Renewal Southeast Asia, I was privileged to be invited to participate in the wreath laying ceremony at one of the major sites of Partisans’ resistance in Jablanica (pronounced Ya-blan-ni-ca) by some of the Bosnian human rights activists and anti-Fascist organizers from Stolac. 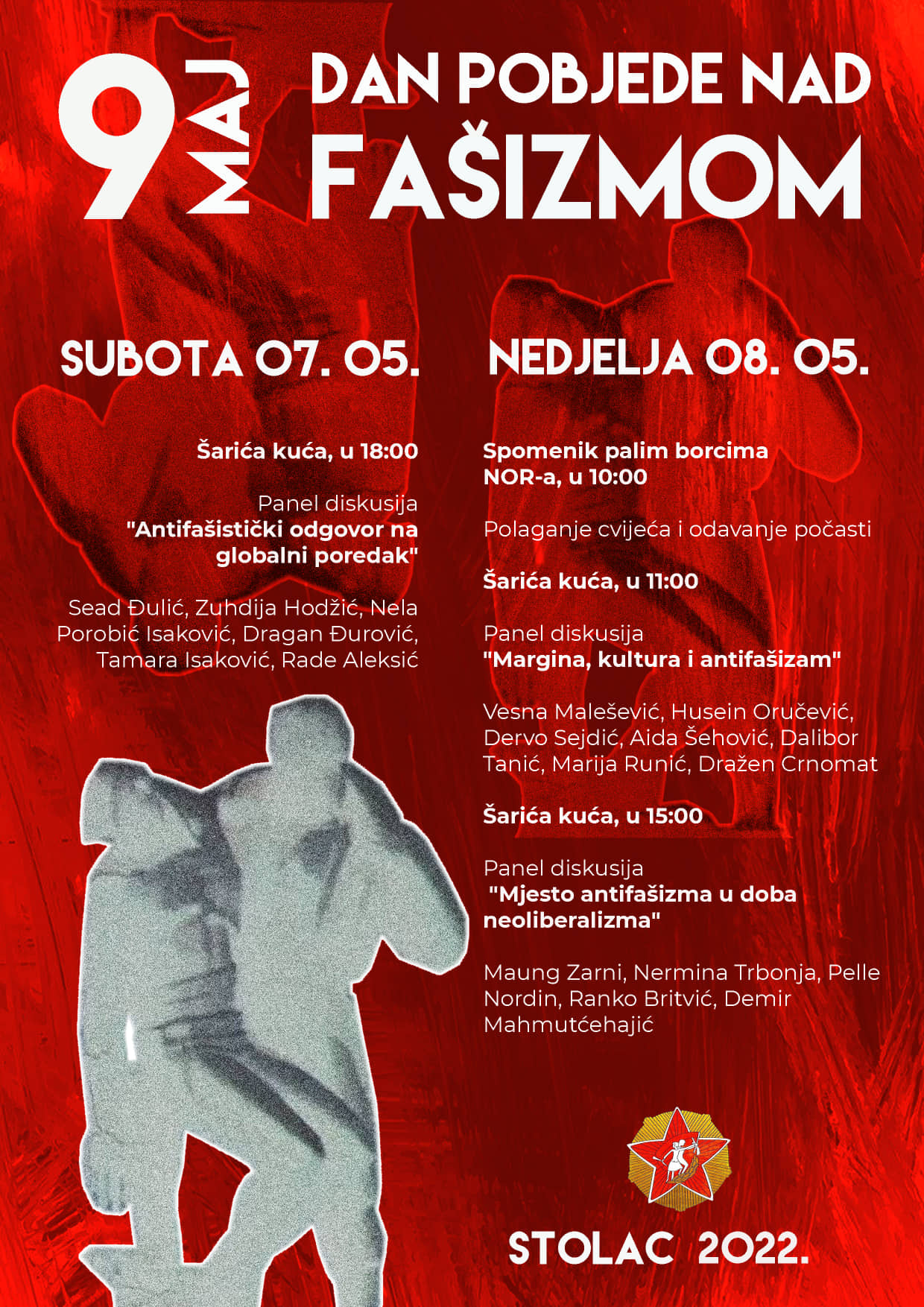 For the first time since the end of the ethnic cleanings in 1992-95, the Bosnian human rights activists in town decided they wanted to explore the possibility of establishing international solidarity networks, linking their local activism with those value-based – anti-Fascist and pro-democratic – activists from other parts of the world. 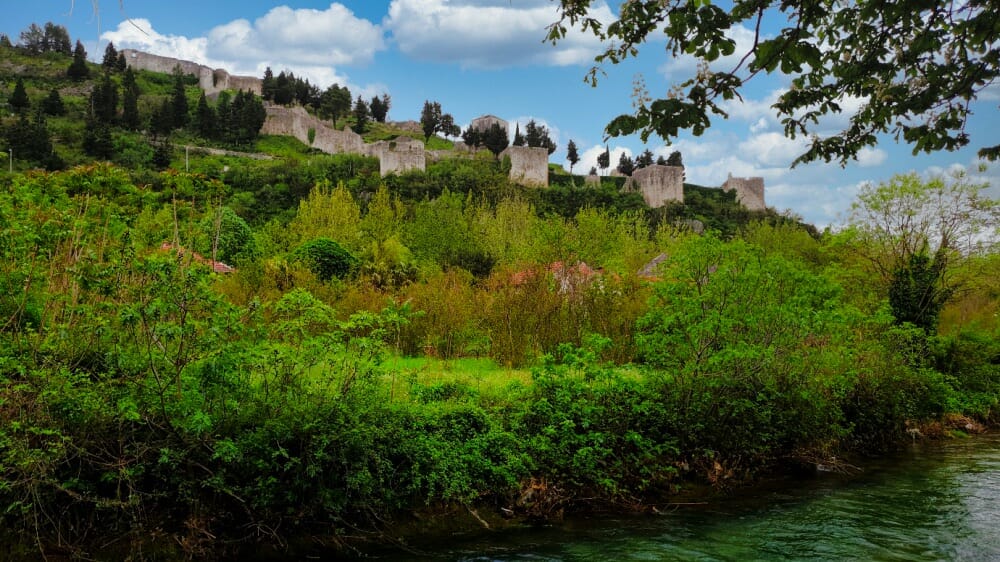 The towering Roman Castle above Stolac, which was occupied by the Croatian militia. The militia pounded the predominantly Bosnian Muslim section of Stolac, in the brutal ethnic cleansing siege in 1992-95. (Photo: Maung Zarni)

Stolac is the oldest town in Bosnia and Herzegovena or Hercegovina – with the trace of human settlement of 15,000 years and boasts 30 national – that is, historic – buildings and monuments. Nestled in between the surrounding mountains, the town of 10,000 Bosnian and Croatian residents, has witnessed – and lived through – various hands of occupiers, including the Romans, the Ottoman Turks, the Austro-Hungarians, the combined Fascist forces of Nazi-Germany, Fascist-Italy and Croatian. Like many other towns and cities, Stolac suffered terror and violence during the wars of multiple genocides in the wake of the break-up of former Yugoslavia. 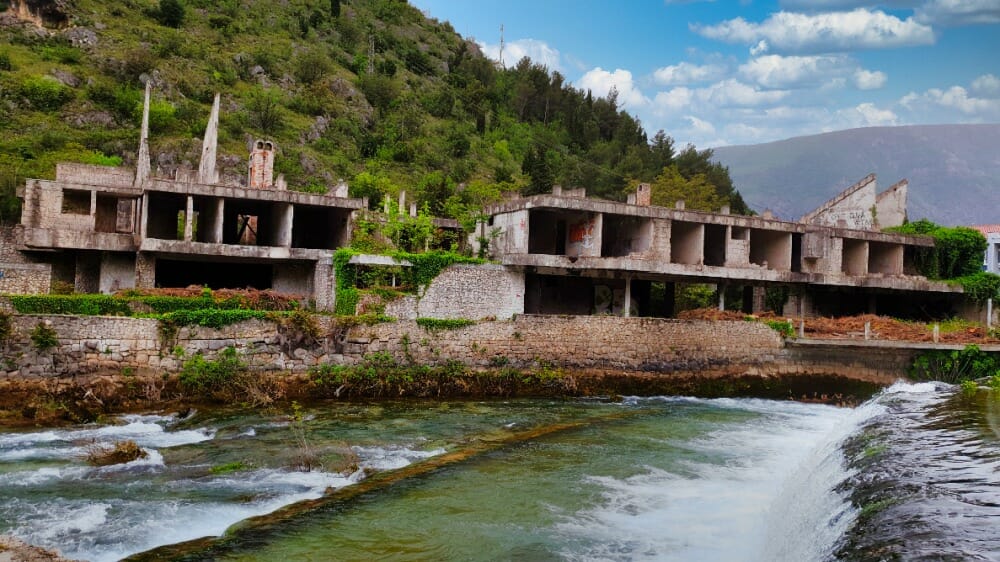 As part of the Victory Day event the organizers of this year’s Victory Day event in Stolac brought together leaders of the Anti-Fascist organizations from Serbia, Montenegro, Croatia, Slovenia, as well as parts of Bosnia and Herzegovina such as Sarajevo.

Having grown up in the Union of the Socialist Republic of Burma under General Ne Win, a military dictatorship with the veneer of socialism which lasted 26 years before the fawny socialist state collapsed in the midst of the nationwide popular uprisings in 1988, I had been to many a mass rallies organized by the Burma Socialist Programme Party, the mass political instrument of Ne Win’s military.

In sharp contrast to the state-managed and staged mass rallies of the old pseudo-socialist Burma of my childhood, I could most certainly feel the genuinely grassroots or organic nature of the Victory Day rally in Jablanica, a sizeable town about 1 hr 30 minutes-drive from Stolac. I saw several generations of Bosnians and former Yugoslav citizens came to pay their tribute to Resistance leader Tito and his comrades. The story of how Tito’s resistance overcame the total annihilation by the Nazi armies of Italy, Germany and the puppet Nazi-state of Croatia is immortalized in the film The Battle of the River Neretva or The Battle of the Neretva. In the old site of the military operation now sits the museum that preserve historical memories of the Partisans. 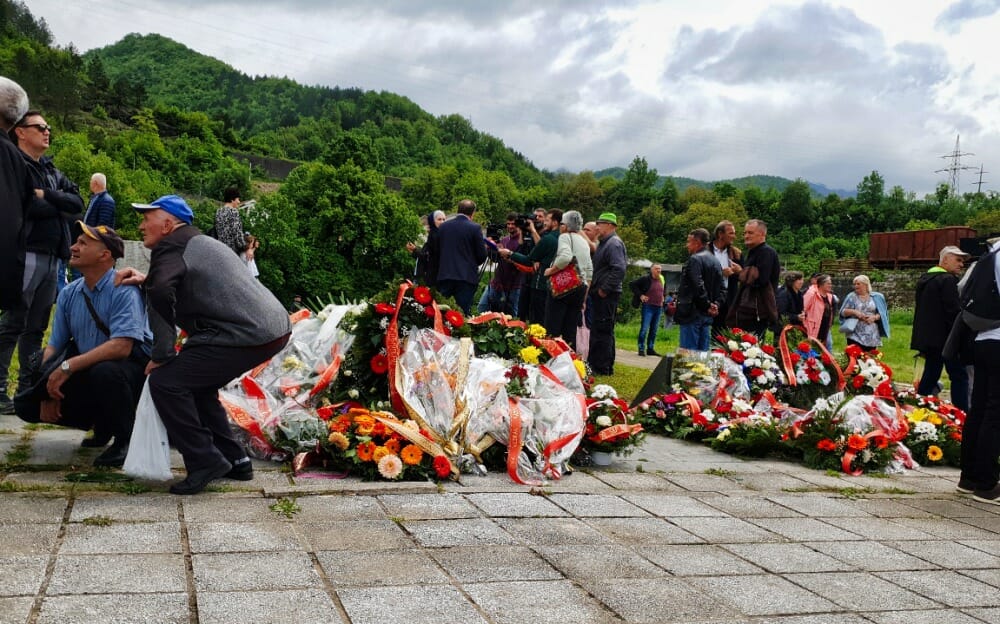 Wreaths from various anti-Fascist organizations were kept in an organized fashion before the 9 May Victory Day commemorative event began in Jablanica, 7 May 2022.

During the Victory events – at Jablanica and in Stolac – I interviewed impromptu the two former Yugoslavians who keep the fine tradition of resistance against Fascism – and in their words, “new Fascisms and neo-Fascisms in different manifestations”.

The first is the interview with Dervo Sejdić, President of Kali Sara or Romski informativni centar / Roma Information Center who successfully took the state of Bosnia and Herzegovina to the European Court of Human Rights. Sejdic talked about the denial of acknowledgment of both the scale of Fascists’ extermination Romani or Roma people or “gypsies” in the old racial slur – between 26,000 – and 40,000 – Roma people of the Fascist-occupied Croatia were mass-slaughtered – and the contributions Roma Partisans made in the guerrilla movements against the Nazis across the Nazi-occupied Europe. 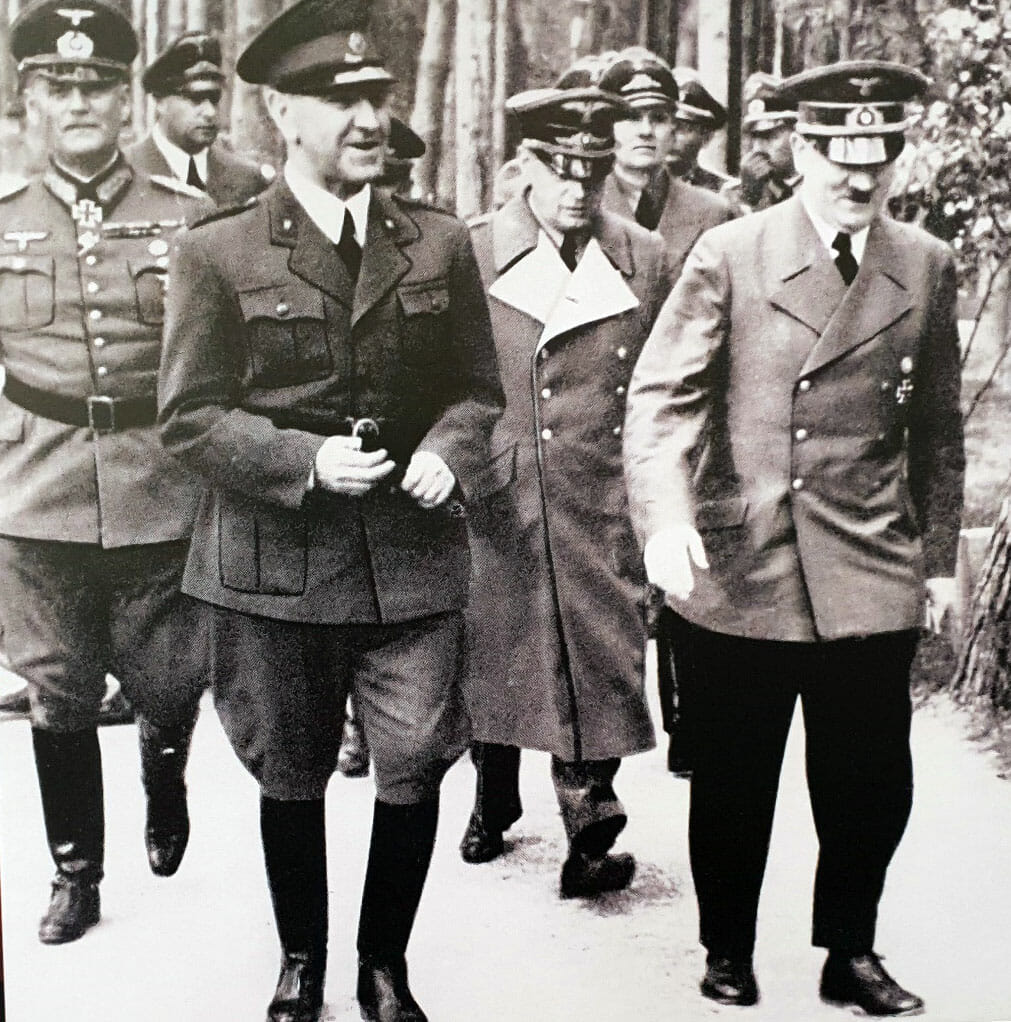 Ante Pavelic, the Harcegovina-born Croatian Fascist leader, responsible for the mass-murder of thousands of Jews, Serbs, and Roma in the Independent Croatian Fascist state, seen with Hitler (to his left). (Photo taken by the author at the anti-Fascist Memorial Museum in Jablanica, Herzegovina, 7 May 2022) 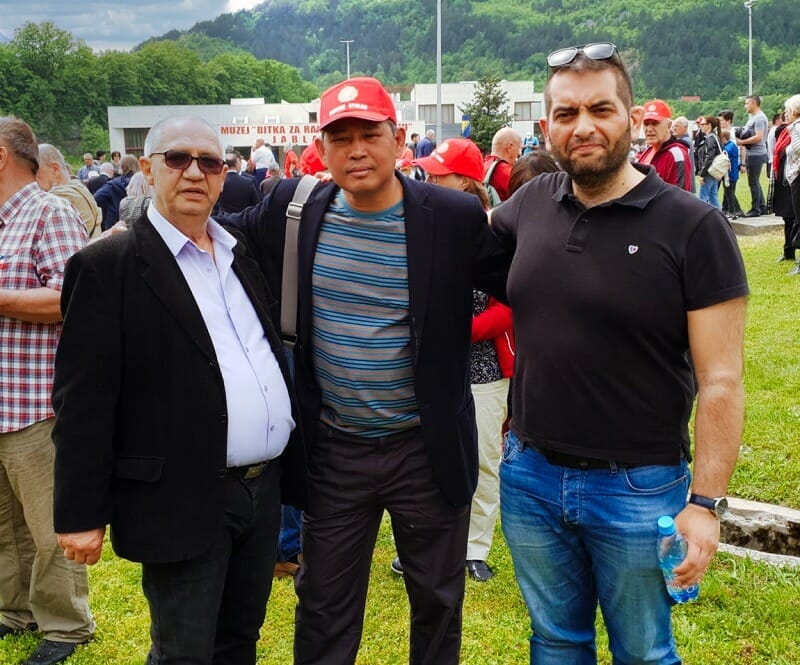 The author with the two leading Roma activists from the two post-WWII successive generations who continue to fight for equality, inclusion and respect for Roma people in Bosnia and Herzegovina, Jablanica, 7 May 2022

Even in the post-WWII Berlin, the Roma and Sinti victims of Nazi Genocide or the Holocaust were not accorded the official recognition and a memorial by Germany until 1992 – that is almost half-century after the fact.

What a shame that various European states post-WWII – from the Czech Republic of the celebrated dissident the late Vaclav Havel to post-totalitarian Romania, Bulgaria and former Yugoslavic republics such as Bosnia and Herzegovina – continue to discriminate, exclude, disempower and otherwise persecute their national minorities, particularly Roma communities.

My second interviewee was Valerija Sjećanje from Slovenia, who made a very pointed observation that Fascism is rearing its head again, as the old Fascist ideas are popping up in new incarnations and manifestations – as Far-Right Populist ideologies.

Valerija is no ordinary elderly lady, simply recalling the horrors of the Fascist past. She said, with justified pride, “I was only months past my 15th birthday when I joined the Yugoslav Partisans,” referring to Tito-led anti-Fascist People’s Liberation Movement against the occupying Nazis. She was assigned a vitally important job of decoding secret messages received for the Partisan commanders and commissars (political officers) attached to the armed resistance units formed along the lines of anti-Fascist Communist resistance networks and organizations.

After the World War II, she married a fellow Partisan fighter from Bosnia and started her new life in Sarajevo as a journalist, the city from which she and her late Bosnian husband evacuated from when the capital came under siege in the break-up of Yugoslavia.

At Stolac’s event in the evening, the 94-years old veteran of Tito’s Partisan was heard in exhausting the younger generation activists – like my Bosnian friend Demir Mahmutcehajic, who brought many of us anti-Fascist democratic activists from across Europe – to “resist new Fascist and neo-Fascist ideologies and populist mobilizations” targeting Others. 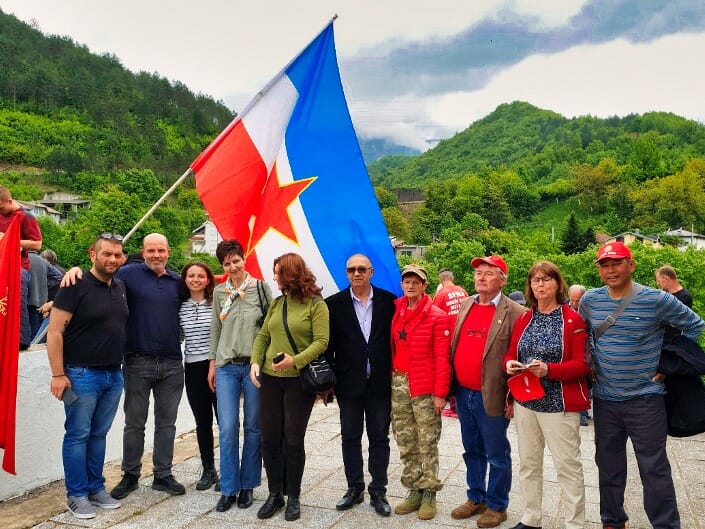 Victory Day participants in Jablanica, Herzegovina, 7 May 2022. The leading organizer of the anti-Fascist organization in Stolac Demir is second from the far left. Far-right in the photo is FORSEA cofounder and author Maung Zarni. 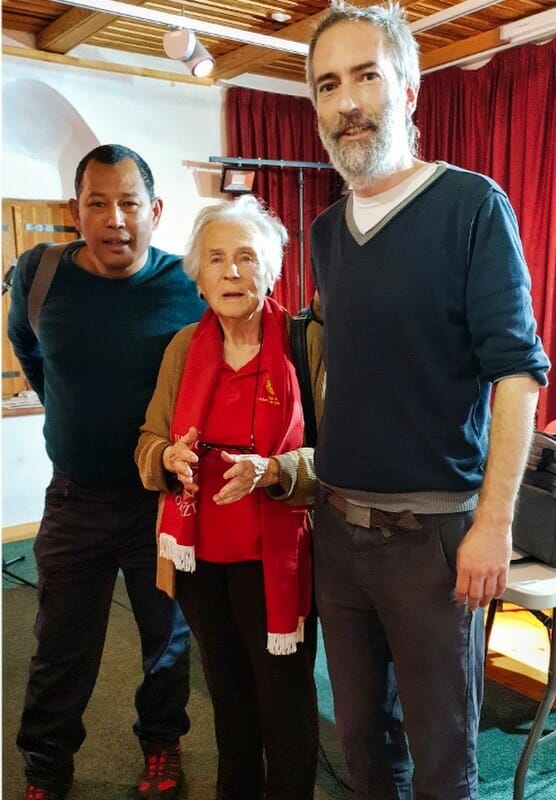 With Valeriji and the Serbian social media activist who assisted her with her English for my interview, Stolac, 7 May 2022.

In the post-event interview she graciously did with me, she asked pointedly and rhetorically “’Are you a fellow human, or not’ is the only question that really matters.”

To this elderly veteran of the past anti-Fascist movement against Europe’s Fascists and Nazis, there is “no race, no religion, or not event nation-state”, but only a universal fellowship of humans.

After the interview, Valerija gave me a bear hug, as firm as her steely hand-shake before the interview, full of warmth. “I live for a brighter future” were her parting words before we departed for dinner.