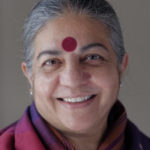 18 Jun 2019 – Food is not a commodity, it is not “stuff” put together mechanically and artificially in labs and factories. Food is life. Food holds the contributions of all beings that make the food web, and it holds the potential of maintaining and regenerating the web of life. Food also holds the potential for health and disease, depending on how it was grown and processed. Food is therefore the living currency of the web of life. 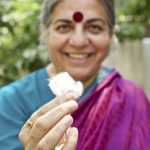 24 Nov 2017 – Over two decades Monsanto has violated laws, deceived Indian farmers by making unscientific and fraudulent claims, extracted super profits through illegal royalty collection by violating India’s Patent and Intellectual Property laws, pushed farmers into debt, and, as a consequence of the debt trap, to suicide. It is time to get unshackled from the Seeds of Suicide and pesticides and pesticide deaths. Through Seeds of freedom and Seeds of Hope we can go forward to GMO free Agroecology.

5 Jul 2017 – India’s small farmers produce more diversity, more food and nutrition per acre than farmers in industrialised countries. Even today, they feed more than 1.3 billion people. Then why are Indian farmers committing suicide today? The root cause is the separation of agriculture from nutrition, and from ecology.

5th of June is World Environment Day. Reflections on President Trump abandoning his responsibility to the Earth and the community of nations.

Golden rice is a false miracle. It is a disease of nutritionally empty monocultures offered as a cure for nutritional deficiency. In fact, golden rice, if successful, will be 400% less efficient in providing Vitamin A…

Gene Drives have been called “mutagenic chain reactions”, and are to the biological world what chain reactions are to the nuclear world. The Guardian describes Gene Drives as the “gene bomb”. Kevin Esvelt of MIT exclaims “a release anywhere is likely to be a release everywhere”, and asks “Do you really have the right to run an experiment where if you screw up, it affects the whole world?”

If we believe in democracy, it is imperative that we have the right to choose which technologies are best for our communities, rather than having unaccountable institutions like Monsanto decide for us. Rather than technologies designed for the continued enrichment of a few, we can ground our technology in a hope of a greater harmony between our human communities and the natural world.

It saddens me to think that a woman is unable to see the destruction we are causing to the world our children will inherit. I hope, for the sake of Kavin’s child/ren (if any) that the future of food we pick, as humanity, is nourishing, sustainable, equitable, climate mitigating and diverse – a future of food based on Agroecology.

Bt. crops are a continuation of a non-sustainable strategy for pest control, which, instead of controlling pests, creates new pests and super pests. Monsanto advertised that Bt cotton would not need pesticide sprays, clearly a case of false advertising.

31 Aug 2015 – Farmers, first of all, are breeders. They might not have the lab coats that have come to define modern plant breeding, but their wisdom, knowledge and contribution is unquestionable. To be able to continue breeding, using their own seed, is their first right, their first freedom and their first duty.

15 Aug 2015 – I wrote a book for the United Nations University titled ‘The Violence of the Green Revolution’, which has been republished by many publishers globally, including the Kentucky University Press. Extracts from the book are available on Google.

A message for India’s Independence Day, 14 Aug 2015 – There is no reason why India should face hunger and malnutrition, and why our farmers should commit suicide.

21 Jul 2015 – Citizens of the United States are being denied the right to know what they are feeding their families despite the fact that 90% of American citizens want GMO labelling on their food. Decades before there was a “debate” over GMOs and Monsanto’s PR and law firms became the busiest of bees, India was introduced to this corrupting, corporate giant that had no respect for the laws of the land.