8 Aug 2019 – The report on global land use and agriculture from the Intergovernmental Panel on Climate Change comes amid accelerating deforestation in the Amazon. 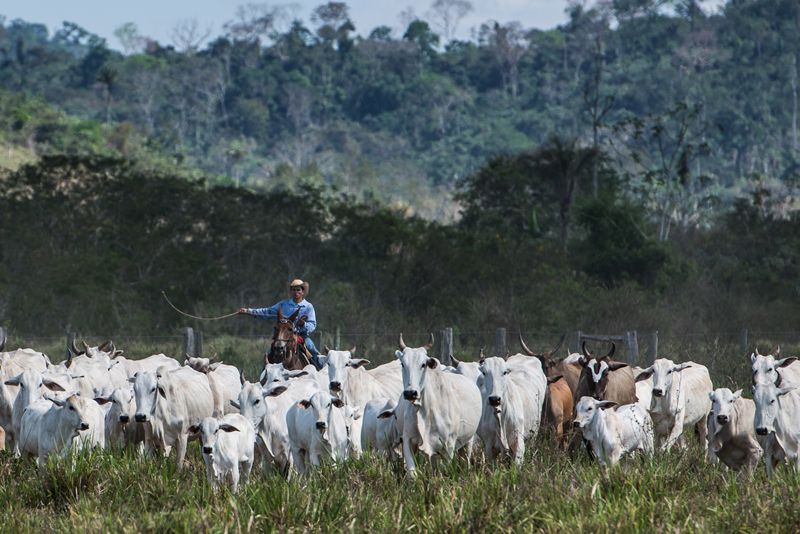 Efforts to curb greenhouse gas-emissions and the impacts of global warming will fall significantly short without drastic changes in global land use, agriculture and human diets, leading researchers warn in a high-level report commissioned by the United Nations.

The special report on climate and land by the Intergovernmental Panel on Climate Change (IPCC) describes plant-based diets as a major opportunity for mitigating and adapting to climate change ― and includes a policy recommendation to reduce meat consumption.

More: Global warming will happen faster than we think

On 8 August, the IPCC released a summary of the report, which is designed to inform upcoming climate negotiations amidst the worsening global climate crisis. More than 100 experts compiled the report in recent months, around half of whom hail from developing countries.

“We don’t want to tell people what to eat,” says Hans-Otto Pörtner, an ecologist who co-chairs the IPCC’s working group on impacts, adaptation and vulnerability. “But it would indeed be beneficial, for both climate and human health, if people in many rich countries consumed less meat, and if politics would create appropriate incentives to that effect.”

Researchers also note the relevance of the report to tropical rainforests, where concerns are mounting about accelerating rates of deforestation. The Amazon rainforests is a huge carbon sink that acts to cool global temperature, but rates of deforestation are rising, in part due to the policies and actions of the government of Brazilian President Jair Bolsonaro.

Unstopped, deforestation could turn much of the remaining Amazon forests into a degraded type of desert, possibly releasing over 50 billion tonnes of carbon into the atmosphere in 30 to 50 years, says Carlos Nobre, a climate scientist at the University of São Paolo in Brazil. “That’s very worrying,” he says.

“Unfortunately, some countries don’t seem to understand the dire need of stopping deforestation in the tropics,” says Pörtner. “We cannot force any government to interfere. But we hope that our report will sufficiently influence public opinion to that effect.”

While fossil fuel burning for energy generation and transport garners the most attention, activities relating to land management, including agriculture and forestry, produce almost a quarter of heat-trapping gases. The race to limit global warming to 1.5 degrees above pre-industrial levels ― the goal of the international Paris climate agreement reached in 2015 ― might be a lost battle unless land is used in a more sustainable and climate-friendly way, the latest IPCC report says.

Related: How much can forests fight climate change?

The report highlights the need to preserve and restore forests, which soak up carbon from the air, and peat lands, which release carbon if dug up. Cattle raised on pastures of cleared woodland are particularly emission-intensive, it says. This practice often comes with large-scale deforestation such as in Brazil or Colombia. Cows also produce large amount of methane, a potent greenhouse-gas, as they digest their food.

By 2050, dietary changes could free millions of square kilometres of land, and reduce global CO2 emissions by up to eight billion tonnes per year, relative to business as usual, the scientists estimate.

“It’s really exciting that the IPCC is getting such a strong message across,” says Ruth Richardson, the Toronto, Canada-based executive director at the Global Alliance for the Future of Food, a strategic coalitions of philanthropic foundations. “We need a radical transformation, not incremental shifts, towards a global land use and food system that serves our climate needs.”

The report cautions that land must remain productive to feed a rising world population. Warming enhances plant growth in some regions, but in others ― including northern Eurasia, parts of North America, Central Asia and tropical Africa ― increasing water stress seems to reduce the rate of photosynthesis. So the use of biofuel crops and the creation of new forests― seen as measures with the potential to mitigate global warming ― must be carefully managed to avoid the risk of food shortage and biodiversity loss, the report says.

Related: Droughts, heatwaves and floods: How to tell when climate change is to blame

About a quarter of the Earth’s land area appears to suffer soil degradation already ― and climate change is expected to make thing worse, particularly in low-lying coastal areas, river deltas, drylands and permafrost areas. Sea level rise is adding to coastal erosion in some regions, the report says.

Industrialised farming practices are responsible for much of the observed soil erosion and pollution, says Andre Laperrière, the Oxford, UK-based executive director of Global Open Data for Agriculture and Nutrition, an initiative to make relevant scientific information accessible worldwide.

The report might provide a much-needed, authoritative call to action, he says. “The biggest hurdle we face is to try and teach about half a billion farmers globally to re-work their agricultural model to be carbon sensitive.“

Nobre also hopes that the IPCC’s voice will give greater prominence to land use issues in upcoming climate talks. “I think that the policy implications of the report will be positive in terms of pushing all tropical countries to aim at reducing deforestation rates,” he says.

Since 1990, the IPCC has regularly assessed the scientific literature, producing comprehensive reports every six years, and special reports on specific aspects of climate change ― such as today’s― at irregular intervals.

A special report released last year concluded that global greenhouse-gas emissions which hit an all-time high of more than 37 billion tonnes in 2018 must sharply decline in the very near future to limit global warming to 1.5 degrees ― and that this will require drastic action without further delay. The IPCC’s next special report, about the ocean and ice sheets in in a changing climate, is due next month.

Governments from across the world will consider the IPCC’s latest findings at a UN climate summit next month in New York. The next round of climate talks of parties to the Paris agreement will then take place in December in Santiago, Chile.

António Guterres, the UN’s climate secretary, said last week that it is “absolutely essential” to implement that landmark agreement ― and “to do so with an enhanced ambition”.

“We need to mainstream climate change risks across all decisions,” he said. “That is why I am telling leaders don’t come to the summit with beautiful speeches.”