Who’s Responsible for the Ecocide in the Amazon

They are killing the Amazon – and it’s not just Bolsonaro, nor is it just Morales or Correa. There is more to it than meets the eye. 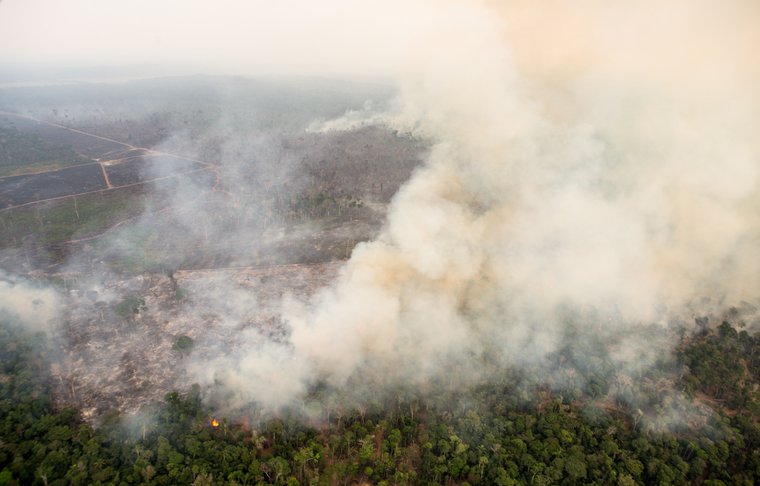 9 Sep 2019 – There’s a cause for alarm as the world witnesses how the Amazon forests in Brazil, the Bolivian Chiquitanía and the Paraguayan swamps are being ravaged by uncontrolled fires. Approximately one million hectares of high biodiversity forests have been damaged so far by these fires, which are impressive, recurring, and quite obviously intentional.

We are facing a catastrophe greater than anything previously seen, the consequences of which are unpredictable. The only apparent certainty that experts are willing to share is that regenerating these forests to their prior condition would take some 200 years. Noam Chomsky has defined what is happening as a “crime against humanity.”

The president of Brazil, Jair Bolsonaro, appears today as the main culprit because, ever since his presidential campaign, he has been delivering hate speeches against indigenous peoples and their territories, calling them a “hindrance to development”. He has also attacked NGO-supported conservationist policies and current legislation limiting the expansion of agriculture and stockbreeding, as well as mining and oil drilling.

Bolsonaro, who has the support of big investors and entrepreneurs, is championing a systematic plan to exploit and plunder the Amazon and any other resource-rich territory, arguing that the “the Amazon belongs to Brazilians.”

Data confirming that the looting has already begun can be found in the latest National Institute for Space Research (INPE) reports which show that in the first seven months of this year, the rate of deforestation in the Brazilian Amazon has increased by 278%; and that the Amazonian territories ravaged by fire during this period are estimated at some 18.600 square kilometres (a 62% increase from last year) – to which should be added the fires that are still burning to this day.

What we are facing here is nothing more and nothing less than a planned, systematic ecocide that ought to be judged by the whole mankind, and those responsible for it held to account. But over and above Brazil’s president, it is crucial to consider the role of and the pressure by the Brazilian business sectors behind the progress of the industries which are deforesting the Amazon – and to claim their liability.

This is a problem that transcends the “Left vs. Right” political ideologies

We should be acutely aware of the fact that the deforestation and the burning of the Amazon and other high biodiversity ecosystems which are critical for the eco-systemic balance and the reproduction of life on the planet is not something that has materialized with Bolsonaro, nor will it be solved simply by removing Bolsonaro.

This is a problem that transcends the “Left vs. Right” political ideologies, which are being presented to the voters as part of an illusory representative democracy which really only “represents” the factual powers of a world-system that is driving us to the extinction of life – including human life – on this planet.

In the case of Brazil, in the last months of 2014, during Dilma Rousseff’s mandate (a leftist government), deforestation in the Amazon increased by 467% compared to 2013. According to INPE data, between 2012 and 2014 approximately 8.000 square kilometres were deforested. And today, while the fires rage in the Brazilian Amazon, more than 500.000 hectares of the Bolivian Chiquitanía are also burning as a result of the institutionalized pressure of the agricultural industry (coca and soya bean cultivation) and industrial stockbreeding, which are both benefiting from the expansion of intensive and large-scale crops promoted by Evo Morales’s “progressive” government.

Something similar is happening in the Ecuadorian Amazon. In 2013, under the government of the likewise “progressive” Rafael Correa, oil drilling in the Yasuni National Park – one of the highest biodiversity regions in the world and home of the Voluntary Isolation Villages – was given the green light. In addition to this, Correa promoted the expansion of oil blocks and large-scale mining in the southern parts of the Ecuadorian Amazon.

Currently, in Ecuador, new large-scale mining operations have started in the Amazon region. They are being promoted by the current Ecuadorian government, which is not in any way considered to be ultra-rightist. This is posing a very serious threat to well-preserved Amazonian territories, which are also indigenous territories and protected areas untouched so far by the oil industry. Reliable studies show that the rate of deforestation in the Ecuadorian Amazon is reaching approximately 0.7% annually, while in Brazil it is only around 0.2%. So, the idea that only Bolsonaro is destroying the Amazon is obviously a hasty and simplistic one.

Clearly, the problem with the depredation of the Amazon and, in general, of the last high biodiversity forests on the planet, is that there is not necessarily a certain government or political tendency responsible for it. It responds, rather, to a systemic ideology, a so far unquestioned and unquestionable paradigm – a paradigm called capitalism. Today we are witnessing how, rather than being a system of life, capitalism is in fact a system of death highly efficient at creating inequalities and exploiting nature to its final consequences.

Neoliberalism, progressivism, globalization and developmentalism turn out to be ultimately the very same formula for accelerating natural resource extraction in the speediest possible way, accumulating capital and, hence, accumulating power. They call it “Development” when in fact its negative results in ecological and social terms only come to show that it is “Bad Development“. This is, in José María Tortosa’s words, the kind of system we have: a “bad developer” system.

The latest report of the Intergovernmental Panel on Climate Change (IPCC) recommends revisiting the native peoples for learning how to preserve critical territories.

Almost anything is being justified under the “Development” banner: agricultural expansion, stockbreeding expansion, indiscriminate logging (legal and illegal), road building and large-scale oil drilling and mining infrastructures in high biodiversity territories. President Correa himself once said: “We cannot be the beggars sitting on a bag of gold” – this was his answer to the social movements which were opposing his government’s extractive policy.

All this being so, we cannot but think that Bolsonaro and Morales, Macri and Maduro, Uribe and Correa, Lula and Bachelet, among many others, are after the same, even though they may justify it in different ways and through different discourses. Ultimately, though, they have all in practice contributed and are contributing to the extinction of life on this planet and have been complicit in covering up a systematic Ecocide.

Now, how do we go about stopping this ecocide? Obviously, a change of culture and a paradigm transformation are needed, since the current situation is unsustainable, and it is not by voting for governments to the Left or to the Right that we are likely to find the solution.

The latest report of the Intergovernmental Panel on Climate Change (IPCC) recommends revisiting the native peoples for learning how to preserve critical territories. According to a study conducted by the IPCC, the areas managed or co-managed by native peoples have much higher rates of presence of birds, mammals, amphibians and reptiles than any other areas (including protected areas), which indicates that this greater biodiversity is being achieved by the practices and land uses of native cultures.

Native peoples may not exceed 5% of the world’s population, but they have preserved up to nearly 80% of the highest biodiversity areas on the planet. Ironically, they are the ones who “slow down development”. It is through the native peoples of the Amazon, and borrowing knowledge from them, that we will find the key to stopping ecocide and development.

Juan Manuel Crespo is a PhD candidate in Development Studies at the HEGOA Institute, University of the Basque Country. It is dedicated to eco-social action research, particularly on issues of good living, political ecology, alternatives to development and knowledge management from de-colonial perspectives. In the Amazon, he has extensive experience working in the territory for the monitoring of the Directorate of Protection of Peoples in Voluntary Isolation in the Yasuni National Park. He is currently a consultant for the Amazon Sacred Watershed Initiative and is a member of the Board of Kara Solar Foundation, dedicated to the research and development of solar technology for Amazonian territories in Ecuador. He is a member of the Latin American Political Innovation Network.