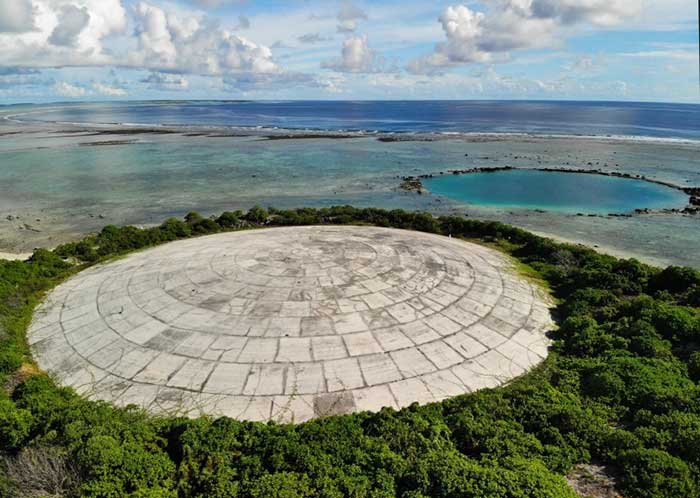 The concrete dome the U.S. built in 1950s to dispose of its nuclear waste in the Marshall Islands, Pacific Ocean.

23 Nov 2019 – According to reports from the Marshall Islands, plutonium is leaking into the Pacific Ocean from a massive concrete bunker the United States built in the 1950s to dispose of nuclear waste. A potential disaster is looming.

Situated mid-way between Hawaii and Australia, the Marshall Islands has a population of 53,000 people. The island chain was occupied by Allied forces in 1944 and placed under US administration in 1947. It achieved nominal independence in 1986 under a so-called Compact of Free Association.

Between 1946-1958, Washington carried out 67 atmospheric and underwater nuclear explosions and a series of biological weapons tests in the Marshall Islands. Irradiated soil from the Enewetak and Bikini atolls, used as “ground zero” for the tests, was poured into a crater left from the detonations, mixed with concrete and covered with a shallow concrete dome.

Called the Runit Dome, the 18-inch thick structure holds more than 3.1 million cubic feet of radioactive soil and debris, including lethal amounts of plutonium. The Los Angeles Times reported on November 10 that climate change is breaking open the aging and weathered dome as it “bobs up and down with the tide,” threatening to spill nuclear waste into the ocean.

Throughout the Pacific, rising sea levels pose an existential threat as they inundate low-lying islands. The Marshall Islands is likely to see many of its 29 atolls under water within 10 to 20 years. On Enewetak atoll, tides are creeping up the sides of the US nuclear dump, advancing higher every year, while cracks are appearing in the dome.

According to Marshall Islands President Hilda Heine, debris from the dome is already seeping into the nearby lagoon. Following a visit to the White House in May, accompanied by the presidents of Palau and the Federated States of Micronesia, Heine told Reuters she “saved her breath” rather than futilely try to persuade US President Trump of their concerns about climate change.

According to the LA Times, the Marshall Islands government lobbied Washington for help, but American officials declared the dome is the responsibility of the Marshallese government.

Based on documents and interviews with US and Marshallese officials, the LA Times found that the American government withheld key pieces of information about the dome’s contents and its weapons testing program before the countries signed the 1986 Compact which released the US from liability.

The US did not reveal that in 1958 it shipped 130 tons of soil from atomic testing grounds in Nevada to the islands. Washington also did not inform the Marshall Islands authorities that a dozen biological weapons tests had been conducted on Enewetak, including experiments with an aerosolized bacteria designed to kill enemy troops. Over 600 people currently live on parts of the atoll.

Over a period of five visits to the Marshall Islands, LA Times reporters documented extensive coral bleaching, fish kills and algae blooms, as well as major disease outbreaks such as dengue fever. Michael Gerrard from Columbia University’s law school told the paper that “the Marshall Islands is a victim of the two greatest threats facing humanity—nuclear weapons and climate change,” for which the “United States is entirely responsible.”

Scientists from Columbia University released a report in July concluding that radiation levels across the islands were “significantly” higher than at Fukushima and Chernobyl. On Bikini atoll, plutonium concentrations were “up to 15–1,000 times higher than in samples from areas affected by the Chernobyl and Fukushima disasters.”

The report, published in the Proceedings of the National Academy of Sciences (PNAS), said soil samples from four uninhabited islands had concentrations of gamma radiation “well above” the legal exposure limit established in agreements between the US and the Marshall Islands.

The team examined contamination levels in food sources, as well as the levels and composition of radioactive isotopes. The food study showed a mix of high and variable levels of contamination on fruit tested on Bikini, Naen and Rongelap islands. The fruit contained radiation higher than the safety levels established by Russia, Ukraine, Belarus and Japan, which have more stringent standards for limiting ingestion of radioactive particles than the US.

The nuclear tests left widespread contamination. Although six percent of US nuclear-bomb testing occurred there, the detonations and mushroom clouds generated more than half the total energy from all US testing. The largest, the Castle Bravo bomb detonated in March 1954, was 1,000 times more powerful than the bombs dropped on Hiroshima or Nagasaki in Japan.

US authorities relocated people living on Enewetak and Bikini in the late 1940s. Those in Rongelap and Utirik, more than a 100 miles from the testing sites, were removed three days after they were showered by fallout from Castle Bravo. The fallout caused skin burns, hair loss, nausea and, eventually, cancer in many of the people exposed.

Washington has repeatedly asserted that locals now face little risk from radioactivity. However, Marshallese continue to distrust US assurances. At Bikini and Rongelap, residents initially returned to their islands after the US told them it was safe. The resettlement was a disaster. Cancer cases, miscarriages and deformities multiplied. By 1967, 10 years after the test, 17 of the 19 children who were younger than 10 and on the island the day Bravo exploded had developed thyroid disorders and growths. One child died of leukaemia.

Several imperialist powers occupied large tracts of the Pacific and used it for nuclear testing after World War II. The United Kingdom exploded atomic and hydrogen bombs at Malden Island and Kiritimati (Christmas Island) in 1957-1958. A total of 193 tests were carried out by France on Fangataufa and Mururoa Atolls in French Polynesia from 1966-1996, including one thermonuclear device in 1968.

Tahitians and other Pacific islanders, as well as British, New Zealand, and Fijian servicemen suffered radiation exposure. Widespread opposition developed to the horrific activities of the arrogant major powers. In a brutal attempt to forestall protests at the Mururoa test site in 1985, French secret service agents blew up the Greenpeace flagship Rainbow Warrior in Auckland harbour, killing a crewman.

Hundreds of Marshall Islanders were meanwhile exiled across the Pacific, impoverished, their homes devastated and health imperilled. An international tribunal concluded in 1988 the US should pay $2.3 billion in claims, but Congress and US courts refused. Documents cited by the LA Times show the US has paid just $4 million.

Today, the Marshall Islands is again assuming geo-strategic importance as part of Washington’s intensifying confrontation with China. In August Mike Pompeo became the first secretary of state to visit Micronesia, to negotiate an extension to a security agreement that gives the US military exclusive access to the vast airspace and territorial waters of Micronesia, the Marshall Islands and Palau. This was necessary, he declared, to face off “Chinese efforts to redraw the Pacific.”