On a periphery road 108 Km east of Sevilla: one white Andalucian village after the other, traditional, poor; and suddenly this super-modern concrete reality, a utopia in many people’s minds!

The basic concept is well known: authorities expropriated land lying fallow in the midst of unemployed starving land labor, and it was transformed into a communal cooperative with very inexpensive housing, kindergarten, schools, clinics.  Behind that was the vision, knowledge, skill, will of the mayor for over 30 years, Juan Grillo.  With the mind, a reality, and the will to transform that reality.

We are dealing with more than economy and have to look beyond economics to capture what went and goes on.  The old distinctions between public and private, and between owning and using, certainly enter.   With comments, such as these. 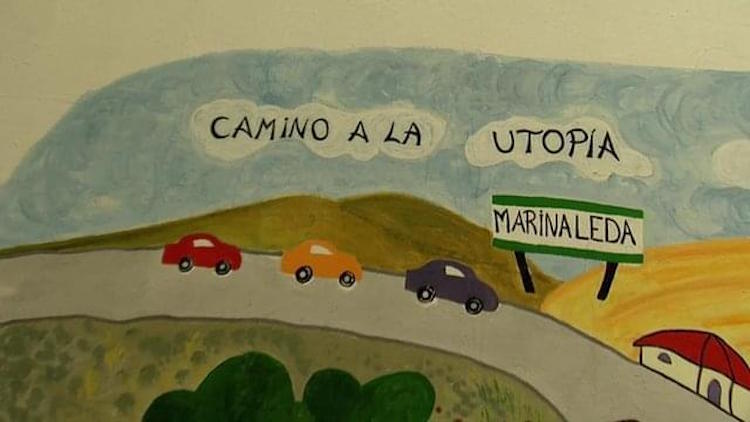 Generally public vs private is seen in terms of state vs capital, the state using plan to advance it goals and capital using the market.  That discourse is important and captures a major 20th century reality, the Bolshevik, Soviet experiment as opposed to the Western, Europe-US, ideology and reality, with social democracy in-betweens, both-ands.

As usual, there is a third possibility missing: the commune, the local authority, the municipality.  It is of by and for public, yet closer to the private, to individuals, families, kith and kin, NGOs, and more so the smaller the community–say, below 10,000 (Marinaleda 2,600-700). There are many municipalities, to the order of 2 million as opposed to 200 states in the world, but they tend to reflect the state vs capital choice made at higher, also beyond state, levels.

And owner vs user is seen in terms of owners deciding its use, or non-use and the non-owner has no property to use, trying to get some in a context of those having property using it to get more property. The current choice in favor of “private” and “owner” spells inequality.

The missing third possibility is public ownership, for public and private use, and public monitoring of that use.  Problematic, could lead to bribes and corruption in general, unless it is transparent to the public, and that case could be slow, bureaucratic, unless small.

Marinaleda cuts through all of this using expropriation against non-use/misuse of a basic resource for human and nature survival and development; and the liberated land then becomes public property of the people of the municipality, administered by the local authority subject to general assemblies worked in jointly owned cooperatives, as opposed to privately owned companies. Moreover, with what results?

According to the municipality: employment for everybody who wants it and as many hours they want; paid accordingly.  Person-days working jumped from 14189 in 1998 to 50617 in 2006; 25% of the latter in industry. There are schools training mechanics, carpenters, plumbers, masons, beyond agriculture.  Streets have been fixed, paved.  Covered sports arenas for tennis, basketball, handball, football, open for all, and for teams for the municipality.  Courses for all who want in informatics, the use of the Internet.  Remedial teaching for children who failed at school.  A huge canal for irrigation.  Assistance to families with newborn babies.  Updating mills, machineries.  Buying more land for communal use.  Old age homes, a new hotel, huge solar energy center, trees planted everywhere, free Internet in all homes, a huge public swimming pool. All of this paid by cooperative income and shared, without any increase in taxes. With general assemblies for joint decision-meeting.  Of, by and for common people.

Basic goal: inexpensive, dignified living for all, based on distribution and solidarity; in peace with each other and nature.

The basic decision is in terms of profit for salaries vs profit for public services of all kinds.  However, one category is no longer there: profit, often hefty, to the landowner for being a landowner.

Of course, much of the publicly available gains can be found in other parts of the world; not so much related to how democratic as to how social democratic. This is why Grillo refers to Marinaleda as social democracy; but by a communal leap rather than by trickling down from Madrid–which might take decades, if at all.  What happened can also be seen as communal autonomy.  Here it is to the left but could also be to the right, with more private ownership.  There is a strong argument in favor of diversity at the municipality level: concrete competition, visible alternatives, not only words in party programs.

The well-paved and shaded street passes the town hall, next to the Casa de Cultura for events and courses and on to the church dedicated to San Nicolas of Marinaleda; it is all there.

A session about the population–are people free to leave and join, up or down–concluded with neither-nor; nobody wants to leave, and we do not want a population beyond our service capacity.  If others like what they see here, then do likewise where they come from.

And then we are back to class and power.  Nothing less than the whole idea of owning land is at stake.  The wise landowner may read the writing on the wall and reorganize from company to cooperative, renting out land at a reasonable fee but then also keeping it well, being his own monitor.  Others might, like slave-owners, colonialists, patriarchs, say that our time is up, your turn to eke out something.

Two countries in need of one-two-many Marinaledas are USA, Japan.

They both have the bottom sinking down, aging countryside, need for renewal; and in Japan the autonomy to be self-sufficient at the local and country levels, not forced to import rice from California.

Thanks Marinaleda, thanks for telling us that what is is possible.

Anticopyright: Editorials and articles originated on TMS may be freely reprinted, disseminated, translated and used as background material, provided an acknowledgement and link to the source, TMS: Marinaleda: A Concrete Utopia, is included. Thank you.

One Response to “Marinaleda: A Concrete Utopia”