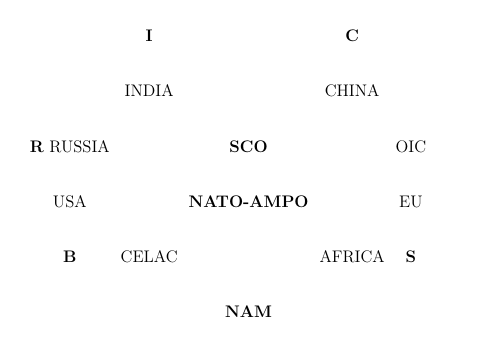 Then, we collapse the groups and the dimensions further:

EU-USA, EUSA, the West, far behind in STI and Population, used military power and brutality to conquer, colonize and imperialize, and to impose trade, hence their high GDP.  On those factors the top 4 lag behind, but they are far ahead on STI and Population to be drawn upon.  And: the Third world, with B-S, the Brazil-South Africa of BRICS.

The bottom is rank equilibrated, the top and the middle have rank disequilibrium; high here, low there.  The top will grow and spend; the bottom may try to invoke ancestors.  The two together have the dangerous crossing profile of rank discordance, a recipe for violence. EUSA may try before BRICS become too strong, at the border, U-KRAINA.

And this is where the West at present tries to expand their territory by including large Ukraine and Georgia into NATO and the E, like with small Baltics.  And this is where Russia tries to prevent them from doing so–all highly predictable in rank discordance terms.

What are the possible solutions to all of this?

Certainly not rank concordance with one group-pole being 1-1-1-1 and under that 2-2-2-2 and so on to the bottom.  That is the ideal setting for structural violence, like maximum rank disequilibrium and discordance are the settings for direct violence.  Of course, any good theory in this field should not only be a theory of war and direct violence but also of structural violence.

Here are some approaches for solving the problems:

This theory of war for state systems is guided by three axioms: they want rank No. 1; they want to equilibrate their rank profiles comparing with themselves; and compare with others on all four power dimensions for any discordance.  The name of the game is power.

Let us now simplify further, only China-USA and average ranks:

China approaches the USA on the achieved dimensions and high growth facilitates increasing military spending.  For that USA has to print money which makes them vulnerable to alternative BRICS institutions.  USA risks a super-inflation, China not.  When it comes to internal revolt against corruption and inequality the may be more equal.

We have talked about rank disequilibrium and rank discordance, let us now proceed to degrees of both of them, to some kind of index.

A rank disequilibrium RDE measure is China 4-2 = 2, USA 7-2 = 5; subtract the ranks to get the differences.  USA is 2.5 times as concerned as China; hence more likely to engage in reckless policies.  Poles with equal ranks like Latin America-Africa in Table 2 get RDE=0, the minimum.  But what is the maximum?  With ranks ranging from 1 to 8, 8-1 = 7 is the highest possible; hence for China 2/7, for USA 5/7.

Then, rank discordance, RDC.  We are now comparing two profiles with each other, not one profile with itself.  If one pole is higher than the other on all, no worry; if one is lower than the other on all no worry either, there is nothing to do about it.  The double worry comes when higher on some dimension(s) and lower on other(s)–maybe Other will try to catch up and pass where it is low, and that is exactly what Other worries about how to do.  USA worries lest China tries to outdo the USA economically and militarily; China about how to do it.  And China worries lest the USA tries to outdo them i n territory dominated economically and/or militarily by treaties and alliances; USA about how to do it. The focus is on crossing profiles.

Let us then look at the more complicated Table 2.  RDE = 2/7, 5/7 and 0 for the three groups; EUSA stands out.  How about RDC?  There are three comparisons to make and we get, against a maximum of 14:

RIC-OIC vs EUSA: 4+3 = 7; vs TW 0 (not crossing); RIC-OIC vs TW 0.  The basic problem is between top and middle, but somebody may also worry that the bottom is coming up at all, even if not crossing.

We notice in passing that the approach reproduces the problems of the contemporary world and proceed to the more complex Table 1, 8×4.

Again USA comes out as the most troubled country, hence very active in equilibrating efforts.  Then comes EU, in short the West, followed by India and Russia.  Lowest, least worried in this sense, are China and Latin America, quite balanced, one at a higher, the than other at a lower level.  We would assume that they will both continue climbing on all dimensions, making themselves heard, but less noisily than the West, Russia and India.  Africa is in-between.  For local concerns we must look at RDE for countries, communities and persons.  Hypothesis: more similar the profiles, the higher the identification.

For rank discordance, RDC, add the rank differences on all dimensions if some are negative, some positive (profiles crossing.)

With 8 poles we have 28 profile pairs, but 8 pairs of profiles do not cross each other, so we are down to 20:

Table 4 – Rank Discordance Between the Poles, 2 at the time

The inside of Table 4 gives the details: the USA has troubles, with all the other 7, China only with 3 of them, like OIC, and then CELAC.  This is the general picture, maybe different from what Western media focused on problems with the USA and EU want to communicate.  And here we are not thinking of the many scars in relations due to EU colonialism and US imperialism, but the problems embedded in the deep structure that has sedimented between them.

What is the maximum RDC?  Between a profile with one 8 and seven 1s, and the opposite profile, one 1 and 7 8s; in other words 56.  The figures in Table 4 come nowhere close; the profiles are not that discrepant.  Had they been the world would have been even less integrated than it is.  And yet there is much too much discordance for good world health.  Each crossing is a conflict that may turn violent.

Conclusion: the powder game has put the whole world on the wrong track, leading to 1914-18, 1939-45, The cold war 1949-89 and the present predicament.  The game is understandable.  The underlying question is the security question: what harm can he do to me, and what can I put up against it?  Answer: more power of all kinds using disequilibrium and discordance as guides.  And the deep structure takes over and dictates the action to its slaves, the states, poles.

We have indicated 7 ways out, 6 to reduce the power of the power-conflict logic and one to increase the power of the cooperation logic.  The underlying question would be, “what good can he do to me and I to him, what does he need most that I can give, and vice versa?”  That question is asked all the time for trade but should be broadened, maybe with four cooperation dimensions, disequilibrium, discordance.

In the meantime the other six would do miracles: less machinery for war, more localism-regionalism-globalism, less power ranking.

Anticopyright: Editorials and articles originated on TMS may be freely reprinted, disseminated, translated and used as background material, provided an acknowledgement and link to the source, TMS: The Octagon: Rank, Disequilibrium, Discordance and War Theory, is included. Thank you.

One Response to “The Octagon: Rank, Disequilibrium, Discordance and War Theory”