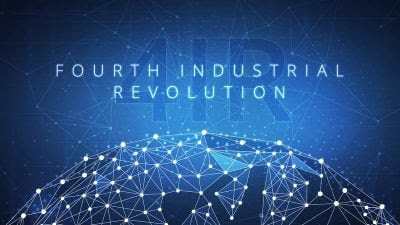 The We Are Human, We Are Free Campaign

27 Apr 2022 – Millions of people worldwide are aware that their lives, and their children’s lives, are being threatened by lockdowns, vaccine mandates and loss of free speech. And there is a growing awareness that these immediate and obvious threats are merely parts of a complex overall plan to implement a technocratic system of world governance that can be described as a neo-feudal system that seeks to increase and consolidate the power and wealth of the world’s billionaire individuals and families by destroying any possibility of autonomous individual behaviour. The intention of these psychopathic elitists is that we ‘the people’ become literal extensions of their will, through technological invasion of all aspects of our lives which will lead to the total loss of our capacity to feel, think and act for ourselves.

Their obsession with total control of all nature and life means they have no genuine awareness of what it means to be alive, and they see everything around them as something to be monetised, numbered and controlled to create a ‘perfect’ state of existence. Because they are so fundamentally insecure, and know that individuals do not willingly give up their existence to become slaves, their most powerful weapon to gain control is lying –  they try to con us into believing that giving them control is in our interests, or indeed that we are in fact in control of our own lives when we make superficial, meaningless choices, such as voting for political parties that inevitably end up doing the bidding of the financial power elite.

These elitists have become masters at co-opting all movements of self-respect, self-care and solidarity – their use of double speak means they claim to be supportive of community, fair wealth distribution, truth in the media, ecological sustainability, diversity, racial equality, women’s equality, freedom and nonviolence (for example) while working to implement an agenda that supports none of these things. And their increasing use over the past 70 years of NGOs that sound ‘friendly’ and ‘independent’, but which in fact pursue corporate, imperialist and other elitist agendas, has led to enormous numbers of ordinary ‘concerned’ people putting their money and energy into organisations and movements that dissipate their capacity to genuinely act in their own interests and the interests of life on the planet as a whole.

To take just a few examples – the environment movement has become dominated by the demand for a massive ‘green’ tech revolution that requires further rape and pillage of the peoples and natural environment of Africa and anywhere else rare minerals are found, union movements around the world have become utterly neutered and no longer act in the interests of their working members, medical ‘science’ is most likely to be a profit-making anti-scientific enterprise rather than one designed to further people’s health through use of genuine scientific methodology, and (particularly close to my heart) campaigns using nonviolent tactics have been used to simply achieve ‘regime change’ in centralised states, furthering the interests of transnational corporations, even though this was never the intention of the majority of activists involved.

While it does feel demoralising at times to realise that it is necessary to question everyone and everything, and not take things at face value, ever (!), there are a number of  (genuinely) independent researchers (including those I have referenced above) who expose the goings on of the Global Elite, historically and currently, through detailed research, logical analysis and referencing, who make the work of deciding who definitely not to trust a little easier for the average person. Although they do not always agree on every angle, and bring different areas of research to the table, they put together a picture of the real world elitist actors, from all countries (Russia and China – here, here and here –  included), that have shaped and continue to shape the world through their particular philosophies (eg. technocracy, eugenics), plans (eg. the New World Order/Great Reset/UN Agenda 30) and organisations.

These researchers’ particular concern is looking beyond the ‘conflict and alliances between nation states’ narrative as an explanation for political and economic behaviour in the world, to expose the transnational and transcultural nature of global finance and elitist philosophies, and the fundamental war being continually waged by the Global Elite on ordinary people (people who are content with a relatively small scale, localised frame of reference for exercising control in their lives, and who value the autonomy of others, and therefore do not feel that they have to be in control in all situations). These researchers expose the megalomaniacs who crave to rule the world, who deem every bit of control exercised by others to be a threat to their security, and whose conflicts with each other pale in comparison to their disregard, disrespect and disgust for those not of their psychopathic, criminal ‘superclass’.

From Analysis to Action

Gaining a thorough analysis is extremely important, and a key part of activism involves research, self-education and information sharing, but if we want to change the situation, it is equally important that we come up with self-empowering actions that take this deeper analysis into account. So, when the historical, real world analysis shows that the Elite (because they are elitist!) do not have any interest in listening to those ‘below’ them, and when we know the extent to which they have corrupted (or even invented) mainstream politics and legal structures, we need to stop pretending

We have mostly been trained to be ‘polite’ or ‘law-abiding’ or ‘respectful of authority’ as children and unfortunately this psychological structuring makes us vulnerable to abusers who falsely claim to be authorities with our interests at heart. And our childhood fear of punishment for ‘disobedience’, including social abandonment when we think or feel differently to others,  gets in the way of us trusting our own capacity to feel, think, make decisions and act for ourselves. Often it helps to pay conscious attention to this fear, so that it can cease to rule us unconsciously. It is unfortunately the case that many freedom activists are still putting their faith in some leader, political party or system to save them, because they feel powerless as individuals, as they were trained to feel by the many forces for domination in the world.

The We Are Human, We Are Free worldwide nonviolent campaign to resist ‘The Great Reset’ is based on both an analysis of the many different components of the Reset, and an analysis of the elitist power structures that further the Reset agenda by disempowering individuals so that they cease to believe they have the responsibility or capacity to take effective action for themselves.

There are so many things that people can do to practically defend themselves, and while it takes a bit of time and commitment to identify and change elements of our lives that contribute to Elite control, it is these ‘small’ things that add up to genuine change in one’s own life and in society as a whole.  Change and standing up for the truth as you see it sometimes takes courage, and there will be times when your resistance may be ‘dramatic’, but it is vital to remember that everyday sensible, practical actions are what grounds an effective resistance movement in reality.

Following is a poster available in 15 languages that presents grassroots noncooperation and constructive actions for people to take in 7 different areas: Pharma, Tech, Media, Banks, Business, Human Social Interactions and Non Payment of Fines (+ Surveillance is thrown in as an added bonus!). The campaign is explained more fully on the We Are Human, We Are Free website. 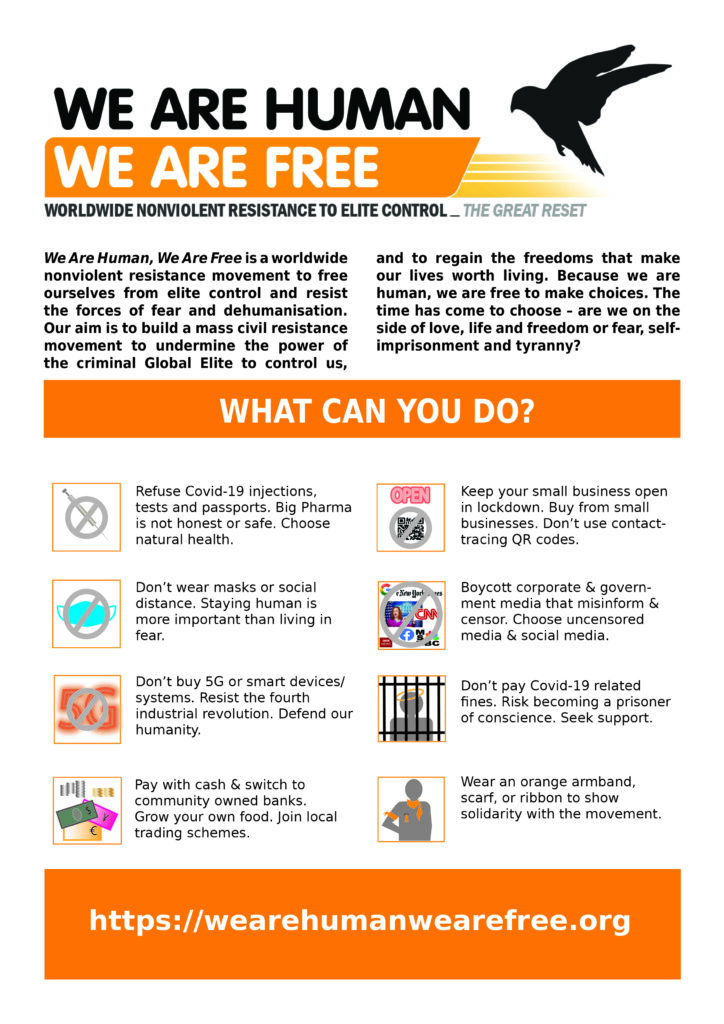 So, as an example, I’m increasing the amount of organic food I grow, I pay in cash whenever possible, I boycott YouTube, Facebook, Google and all mainstream media (i.e. I don’t pay directly for any of these media or engage in ‘free’ use that encourages advertisers or data mining), I shop at small businesses and boycott Amazon,  I stay healthy via natural health modalities rather than using pharmaceuticals, I don’t use 5G technology or ‘smart’ home gadgets, and I am willing to accept imprisonment if necessary rather than act against my conscience, trusting that the universe will take me where it wills for a productive purpose.

I do these things not to be ‘virtuous’ but because I reckon they are the most effective way that I can be myself, undermine the power of the Elite to dysfunctionally control us, and live a life worth living. I don’t judge others according to whether or not they are participating in all aspects of the campaign, particularly when I know that it takes time to reorient from ‘standard’ life to deliberate existence, and that the pressure of fear is always present and it sometimes forces us in directions we would rather not go.

I encourage everyone interested in freedom to begin freeing themselves to take the actions that directly transform their lives, and give them greater functional control without asking permission from a ‘leader’, a ‘representative’ or even ‘the majority’. It’s okay to just get on with it yourself! I believe in YOU. 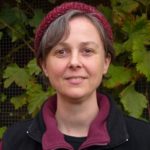 Anita McKone is a member of the TRANSCEND Network for Peace Development Environment and has been a nonviolent activist since 1993. She has been arrested and imprisoned on a number of occasions for her activism. Anita has written many articles on different aspects of nonviolent activism, psychology and philosophy including Fearless Psychology and Fearful Psychology: Principles and Practice. She has also written and recorded eight ‘Songs of Nonviolence’.

Anticopyright: Editorials and articles originated on TMS may be freely reprinted, disseminated, translated and used as background material, provided an acknowledgement and link to the source, TMS: Analysis of ‘The Great Reset’ Must Lead to Practical Action to Defeat It, is included. Thank you.