October 8-12, 1974 a symposium on “Patterns of Resource Use, Environment and Development Strategies” was convened in Cocoyoc, Mexico by the directors of UN Environment Programme and the UN Conference on Trade and Development, Maurice Strong and Gamani Corea respectively. The Rapporteurs were Barbara Ward for resource use and the environment and Johan Galtung for development strategies.

That part of The Cocoyoc Declaration–adopted by the participants–is reproduced below, with certain sadness: it is as valid today, more than 40 years later.  The two directors received a three-feet-long cable, from the US State Department, rejecting the declaration entirely.  Signed by Henry Kissinger. 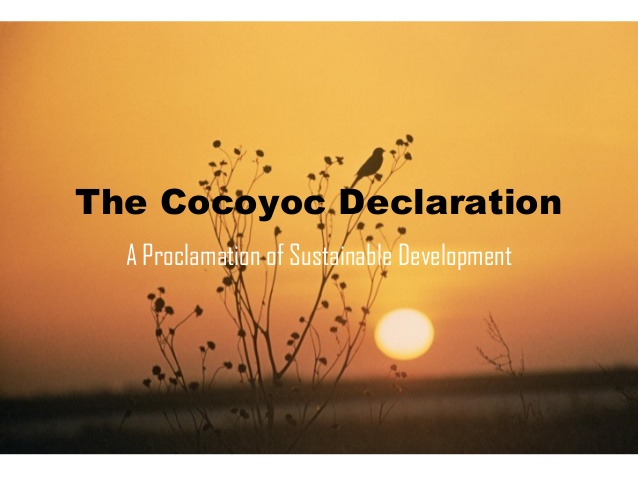 1. The purpose of Development

Our first concern is to redefine the whole purpose of development. This should not be to develop things but to develop man. Human beings have basic needs: food, shelter, clothing, health, education. Any process of growth that does not lead to their fulfillment- or, even worse, disrupts them- is a travesty of the idea of development. We are still in a stage where the most important concern of development is the level of satisfaction of basic needs for the poorest sections in each society which can be as high as 40 per cent of the population. The primary purpose of economic growth should be to ensure the improvement of conditions for these groups. A growth process that benefits only the wealthiest minority and maintains or even increases the disparities between and within countries is not development. It is exploitation. And the time for starting the type of true economic growth that leads to better distribution and to the satisfaction of the basic needs for all is today. We believe that thirty years of experience with the hope that rapid economic growth benefiting the few will “trickle down” to the mass of the people has proved to be illusory. We therefore reject the idea of “growth first, justice in the distribution of benefits later”.

Development should not be limited to the satisfaction of basic needs. There are other needs, other goals, and other values. Development includes freedom of expression and impression, the right to give and receive ideas and stimulus. There is a deep social need to participate in shaping the basic of one’s own existence, and to make some contribution to the fashioning of the world’s future. Above all, development includes the right to work, by which we mean not simply having a job but finding self-realization in work, the right not to be alienated through production processes that use human beings simply as tools.

2. The diversity of Development

Many of these more than material needs, goals and values, depend on the satisfaction of the basic needs which are our primary concern. There is no consensus today what strategies to pursue in order to arrive at the satisfaction of basic needs. But there are some good examples even among poor countries. They make clear that the point of departure for the development process varies considerably from one country to another, for historical, cultural and other reasons. Consequently, we emphasize the need for pursuing many different roads of development. We reject the unilinear view which sees development essentially and inevitably as the effort to initiate the historical model of the countries that for various reasons happen to be rich today. For this reason, we reject the concept of “gaps” in development. The goal is not “to catch up” but to ensure the quality of life for all with a productive base compatible with the needs of future generations.

We have spoken of the minimum satisfaction of basic needs. But there is also a maximum level, there are ceilings as well as floors. Man must eat to live. But he can also over-eat. It does not help us much to produce and consume more and more if the result is an ever increasing need for tranquilizers and mental hospitals. And just as man has a limited capacity to absorb material goods, we know that the biosphere has a finite carrying capacity. Some countries tax it in a way that is far out of proportion with their share in world population. Thus they create environment problems for others as well as for themselves.

Consequently, the world is today not only faced with the anomaly of underdevelopment. We may also talk about over consumptive types of development that violate the inner limits of man and the outer limits of nature. Seen in this perspective, we are all in need of a redefinition of our goals, of new development strategies, of new life styles, including more modest patterns of consumption among the rich. Even though the first priority goes to securing the minima we shall be looking for those development strategies that also may help the affluent countries, in their enlightened self-interest, in finding more human patterns of life, less exploitative of nature, of others, of oneself.

We believe that one basic strategy of development will have to be increased national self-reliance. It does not mean autarky. It implies mutual benefits from trade and cooperation and a fairer redistribution of resources satisfying the basic needs. It does not mean self-confidence, reliance primarily on one’s own resources, human and natural, and the capacity for autonomous goal-setting and decision-making. It excludes dependence on outside influences and powers that can be converted into political pressure. It excludes exploitative trade patterns depriving countries of their natural resources for their own development. There is obviously a scope for transfer of technology, but the thrust should be on adaptation and the generation of local technology. It implies decentralization of the world economy, and sometimes also of the national economy to enhance the sense of personal participation. But it also implies increased international cooperation for collective self-reliance. Above all, it means trust in people and nations, reliance on the capacity of people themselves to invent and generate new resources and techniques to increase their capacity to absorb them to put them to socially beneficial use, to take a measure of command over the economy, and to generate their own way of life.

In this process education for full social awareness and participation will play a fundamental role and the extent to which this is compatible with present patterns of schooling will have to be explored.

To arrive at this condition of self-reliance, fundamental, economic, social and political changes of the structure of society will often be necessary. Equally necessary is the development of an international system compatible with and capable of supporting moves towards self-reliance.

Self-reliance at national levels may also imply a temporary detachment from the present economic system; it is impossible to develop self-reliance through full participation in a system that perpetuates economic dependence. Large parts of the world of today consist of a center exploiting a vast periphery and also our common heritage, the biosphere. The ideal we need is a harmonized cooperative world in which each part is a center, living at the expense of nobody else, in partnership with nature and in solidarity with future generations.

There is an international power structure that will resist moves in this direction. Its methods are well known: the purposive maintenance of the built-in bias of the existing international market mechanisms, other forms of economic manipulations, withdrawing or withholding credits, embargoes, economic sanctions, subversive use of intelligence agencies, repression including torture, counter-insurgency operations, even full-scale intervention. To those contemplating the use of such methods we say: “hands-off. Leave countries to find their own road to a fuller life of their citizens.” To those who are the -sometimes unwilling- tools of such designs- scholars, businessmen, police, soldiers and many others- we would say: “refuse to be used for purposes of denying another nations the right to develop itself”. To the natural and social scientists, who help design the instruments of oppression we would say: “the world needs your talents for constructive purposes, to develop new technologies that benefit man and do not harm the environment.” 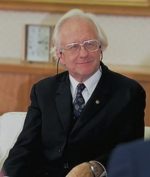 Johan Galtung, a professor of peace studies, dr hc mult, is founder of TRANSCEND International and rector of TRANSCEND Peace University. He was awarded among others the 1987 High Livelihood Award, known as the Alternative Nobel Peace Prize. Galtung has mediated in over 150 conflicts in more than 150 countries, and written more than 170 books on peace and related issues, 96 as the sole author. More than 40 have been translated to other languages, including 50 Years-100 Peace and Conflict Perspectives published by TRANSCEND University Press. His book, Transcend and Transform, was translated to 25 languages. He has published more than 1700 articles and book chapters and over 500 Editorials for TRANSCEND Media Service. More information about Prof. Galtung and all of his publications can be found at transcend.org/galtung.

Anticopyright: Editorials and articles originated on TMS may be freely reprinted, disseminated, translated and used as background material, provided an acknowledgement and link to the source, TMS: The Cocoyoc Declaration, is included. Thank you.